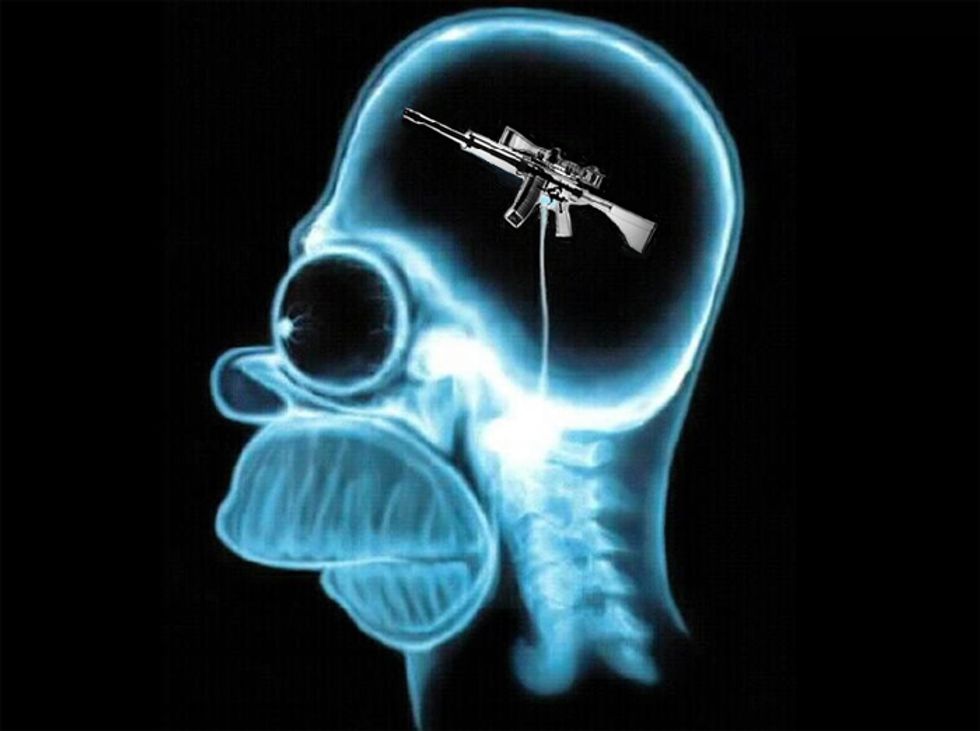 Yesterday, we brought you the story ofgun-loving neurological researcher Dr. Peter Steinmetz, whose favorite hobby seems to be hanging out at Phoenix Sky Harbor Airport with his AR-15, just because he can. Or at least it was, until he was arrested last Friday for pointing the barrel "inadvertently" at two women in the airport. And now that he's big news, his employer, Barrow Neurological Institute, has made him an Unperson on their website. They haven't fired him -- as far as we know, because of course it's an HR matter and they don't comment on HR matters. But you won't find his biographical info (linked here from Google cache) or other references to Steinmetz on the Barrow website.

Steinmetz had been -- and may still be? -- the Director of the Neuroengineering Program at Barrow, and according to the now-deleted bio,

His primary research interests are applying mathematical and engineering principles to understand human cognition and to improve bioelectric therapies, such as deep brain stimulation. He is author or co-author on more than 15 articles in peer-reviewed journals.

Also, guns, the Second Amendment, and the Starbucks Coffee stand at Sky Harbor, which apparently was so much yummier than the Starbucks anywhere else in town that he had to go get his caffeine at the airport, what with the convenient parking and the ability to walk around with a semiautomatic rifle.

For what it's worth, there's a Starbucks at the Park Central Mall, just a few blocks away from Barrow. We weren't able to find out whether Park Central allows open carry, however. We have a feeling it might not have been about the coffee anyway.

Phoenix New Times also noticed that this link was changed Tuesday -- what had been listed on the heading as the "Steinmetz Laboratory" is now merely the "Neuroengineering Laboratory." Barrow has also completely deleted another page describing Steinmetz's research at the institute.

We also have to applaud New Times reporter Ray Stern for at least asking hospital spokeswoman Carmelle Malkovich if it would be possible to photograph the "Steinmetz Laboratory." She said no.

Still, Steinmetz shouldn't worry too much about having his name removed from association with the lab. He can still be immortalized in the medical literature -- perhaps the compulsion to carry a gun in public solely for the sake of showing everyone that you can carry a gun in public could be named after him.