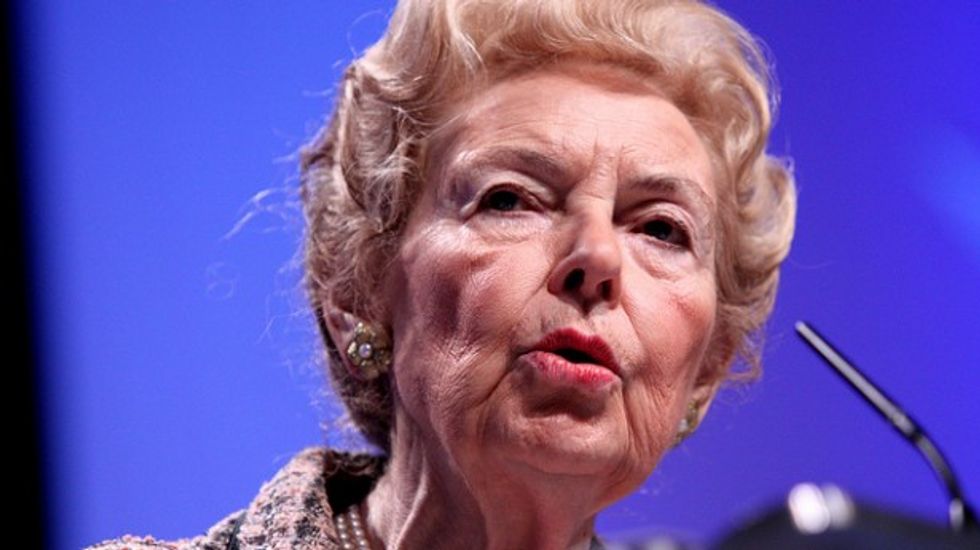 Kicked out by her own family? Now she has even more in common with Fred Phelps

[wonkbar]a href="http://wonkette.com/599620/meet-the-fourth-mrs-trump-america"[/wonkbar]Poor Phyllis Schlafly. In an interview published at rightwing conspiracy clearinghouse WND Monday, she worries she's about to be voted out of her presidency of the Eagle Forum, the rightwing family values group she founded, simply because she's endorsed Donald Trump for president. And one of the traitors on the Eagle Forum board is her own daughter! It's kind of like a wingnut version of King Lear, with all the acrimony and potential for violence, but none of the real sense of tragedy. Which we guess makes it more like any given episode of Falcon Crest, really. Still, any old excuse to trot out the quote "Thou shouldst not have been old till thou hadst been wise," right?

WND publisher and Birther King Dr. Jerome Corsi, PhD, who has a doctorate and is S-M-R-T, brings us the terrifying details of a conservative institution in crisis:

“This may be my Dobson moment,” Schlafly told WND, referring to the 2010 board vote that forced James Dobson, founder of Focus on the Family, to discontinue his popular national radio show.

“The six board members calling today’s telephone meeting won’t tell me what the meeting is about, but I think it’s an attempt to vote me out,” Schlafly said. “It’s disloyal and it’s terribly shocking, and I’m completely depressed about it.

“I may be one vote short to win today,” she concede

[wonkbar]a href="http://wonkette.com/534205/the-time-phyllis-schlafly-incited-a-riot"[/wonkbar]Did you know that there was such a thing as a "Dobson Moment"? We did not! It is apparently a thing that is real in Wingnuttistan, like a New York Minute or the Biden Rule. Sadly, it doesn't even look like Schlafly will be able to incite a riot to preserve her place at the head of Eagle Forum.

In addition to her support of Trump, Schlafly's serpent-toothed daughter and the other five rebel board members are also motivated by her opposition to the group's endorsement of a constitutional convention to demand a balanced budget amendment to the U.S. Constitution, which god knows is at the root of untold numbers of family squabbles. You should have seen the foofaraw at Thanksgiving!

Even worse, Schlafly hints darkly at skullduggery, chicanery, and even shenanigans! (As of yet, no reports of Hoopla, however.)

Schlafly said the board meeting was called by only three members, and Eagle Forum lawyers are arguing that three members are not enough, according to the by-laws, to call a meeting of the board.

“This is a complete takeover attempt,” she said.

“I think the leader of the coup is my daughter Anne Cori and her husband at Eagle Forum of Missouri,” Schlafly said. “I think she and her husband want to take over the organization.”

Schlafly's son John, Eagle Forum treasurer and also a board member, appears to be loyally standing by his mom, and told Corsi she had endorsed Trump because he was the bestest conservative, and thought it important to do everything she could to help Trump avoid a contested convention, where the "liberals" in the GOP might throw out some of the most conservative planks in the platform. Yes, he said liberals in the GOP:

“Every year at the GOP convention there’s a platform fight from liberals within the party that want to pull out key conservative planks, and Phyllis won Trump’s support to maintain a conservative GOP platform this year,” John Schlafly said.

This is also the reason Schlafly opposes a constitutional convention, because even if the stated goal is to add a Balanced Budget Amendment, the liberals might stage a coup, repeal the Second Amendment, and who knows, even let women vote all over again.

On Sunday, Schlafly posted a letter to the Gang of Six on her Facebook page, demanding the miscreants step down:

The accompanying Facebook warns that this attempted coup is taking place at a time when America is imperiled, since America is always imperiled, and even warns that "The Chinese Communists are on the move as Europe falters under its misguided policies of trade and immigration." Yep, those Red Chinese, always on the march, and America's last hope, the Eagle Forum, at war with itself! We bet Marvel is already negotiating for the movie rights.

All in all, it's a sad day for America, and exactly the sort of lawlessness that you'd expect to find in Obama's America! We bet none of this would have happened in a nation where the commander-in-chief cared about the Constitution. Why won't Barack Obama set a better example for the Schlafly family?