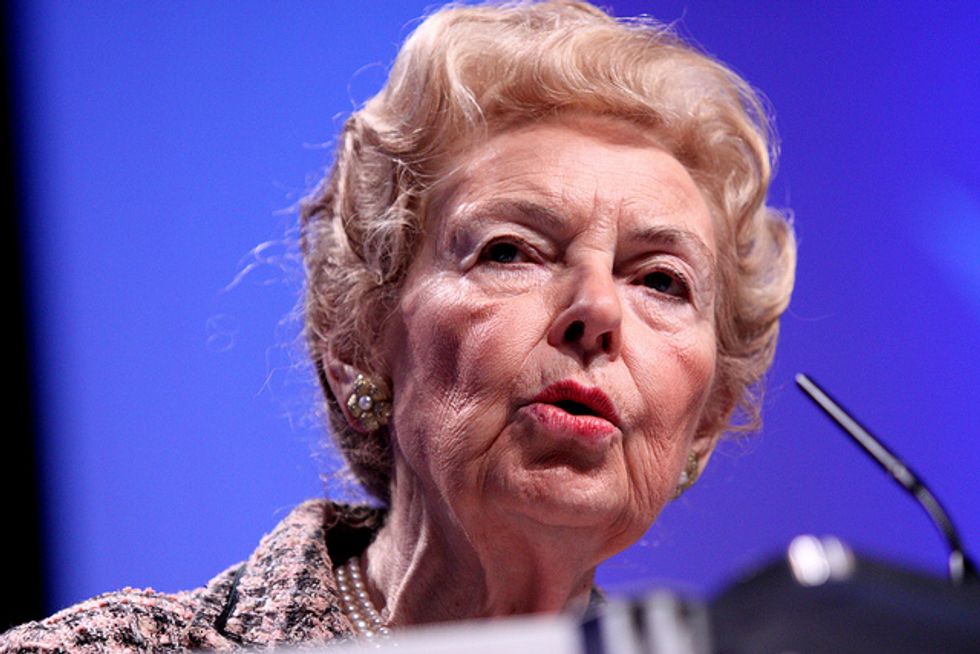 The last time yer Wonket visited noted feminist icon and gay-son-having mother of the year Phyllis Schlafly, her noxious Eagle Forum organization was arguing it IS TOO okay for companies to deny paychecks to women who have the utter gall to be both pregnant and employed. Before that, she was explaining that women could avoid a whole lot of that rape and violence stuff if they'd just go ahead and get married, because as Phyllis has explained time and time again (why do you not listen?), it's not rape if you've said "I do" at least once in your life. Then of course, there was that whole incident in the olden times when she pretty much started a riot.

So, what's Mother Schlafly doing now? Well, you see, she has prepared a Thought Piece for the World Net Daily, Schlaf-schplaining that what the world needs now is a whole lot more penis-havers on college campuses, and that to do this, we need some sort of plan to make sure those poor boys get a fair shake in this lady-owned and -operated world. Let us lookie and learn from Mother:

Long ago when I went to college, campuses were about 70 percent male, and until 1970 it was still nearly 60 percent. Today, however, the male percentage has fallen to the low 40s on most campuses.

And Phyllis was the only good woman present, as she had only gone to college to prepare for a career telling women to cease all education the second a gentleman expresses a desire to purchase them from their fathers. Unlike those OTHER bitches who were there to "learn."

One female student described the new relationship between the sexes like this: “Out of that 40 percent male population, there are maybe 20 percent we would consider dating, and out of those 20 percent, 10 have girlfriends, so all the girls are fighting over that other 10 percent.”

All girls have the exact same taste in men (and only men), and OMG, why does Hunter always have to have a girlfriend, he's like such a godly man.

Anybody who understands human nature realizes that this situation changes behavior. Girls do not want to get left out in the cold, so they compete for men on men’s terms.

This results in more casual hook-ups that are dead-end encounters with no future and no real romantic relationships. A psychology professor described this bluntly: “When men have the social power, they create a man’s idea of relationships: more partners, more sex, no commitment.”

Yes, we, along with Mother, bemoan this frightening new world where men have all the social power and women are forced to compete on men's terms. How will we navigate these murky waters through which we have never traveled?

Moreover, we know from  many years of education sitting at the warm feet of Mother Schlafly that ladies don't even LIKE the nooky-pooky unless it happens, 1. within a Christian marriage, 2. seldomly and 3. results in the birth of a Duggar. College women are no different. Mother has been to college. She knows that girls are only there to pick up MRS degrees, and if they accidentally end up in medical school, well, that's a very nice thing for them to do for a couple of years until Hunter finally comes to his senses. I do hope they find time to learn how to make a proper roast at some point, though!

Colleges claim they grant admissions based on academic merit, and girls come out of high school with better grades than boys. But that doesn’t always mean they are smarter or more capable of doing college work or succeeding after graduation.

Boys do far better on average than girls on the SAT test for mathematics, which means that boys are better prepared than girls for STEM majors in college. This has been true every year for more than 40 years.

Clearly, "look at the penis I currently have" trumps something so jejune as "grades" as a predictor of one's success at the university level. What is wrong with these stupid liberals that they don't understand this? Also, we could add something about how girls are too often not encouraged to pursue math and science in lower grades, which contributes to [CENSORED LIBERAL AGENDA WORDS, DON'T WORRY YOUR PRETTY LITTLE HEADS].

And really, this influx of womanhood in higher education is to blame, at least partly, for all the raping problems on college campuses, because there are just so many of them, it's overwhelming for those poor boys:

The imbalance of far more women than men at colleges has been a factor in the various sex scandals that have made news in the last couple of years.

Yes, many campus assaults begin with the words, "If the ratio of men to women at this university was more balanced, I wouldn't have to do this!"

Anyway, Mother has solved the problem, and she will tell it to you now:

One solution might be to impose the duty on admissions officers to arbitrarily admit only half women and half men. Another solution might be to stop granting college loans, thereby forcing students to take jobs to pay for their tuition and eliminate time for parties, perhaps even wiping out time for fraternities and sororities. I went through college while working a full-time manual-labor job, and I don’t regret a minute of it; it was a great learning experience.

Finally, we need to get rid of Title IX, because more of those poor boys would try out for college if they thought they might be able to have a shot at making the whiffleball team. Instead, those feminazi trollops came in and murdered all the sports:

The feminists have abolished more than 2,200 men’s college sports teams since 1981, such as wrestling, gymnastics, track, golf and even some football in order to limit the number of male players to Title IX guidelines. That removes a primary motivation for young men to go to college, many of whom want to try out for a sport even if they are not good enough to make the team.

You may not be old enough to remember a time when college football was popular, before the feminists killed all of it, but Mother Will Never Forget.

The popularity of the new college football playoff system illustrates how successful men’s college sports can be for participants and fans alike. But when colleges eliminate men’s sports, women are hurt by the resulting gender imbalance in enrollment.

That is the last line of her piece, so, QED, we guess?

To sum up Phyllis's message, boys have a penis, and ladies should stop doing things, forever, because it hurts men's feewees. The end.