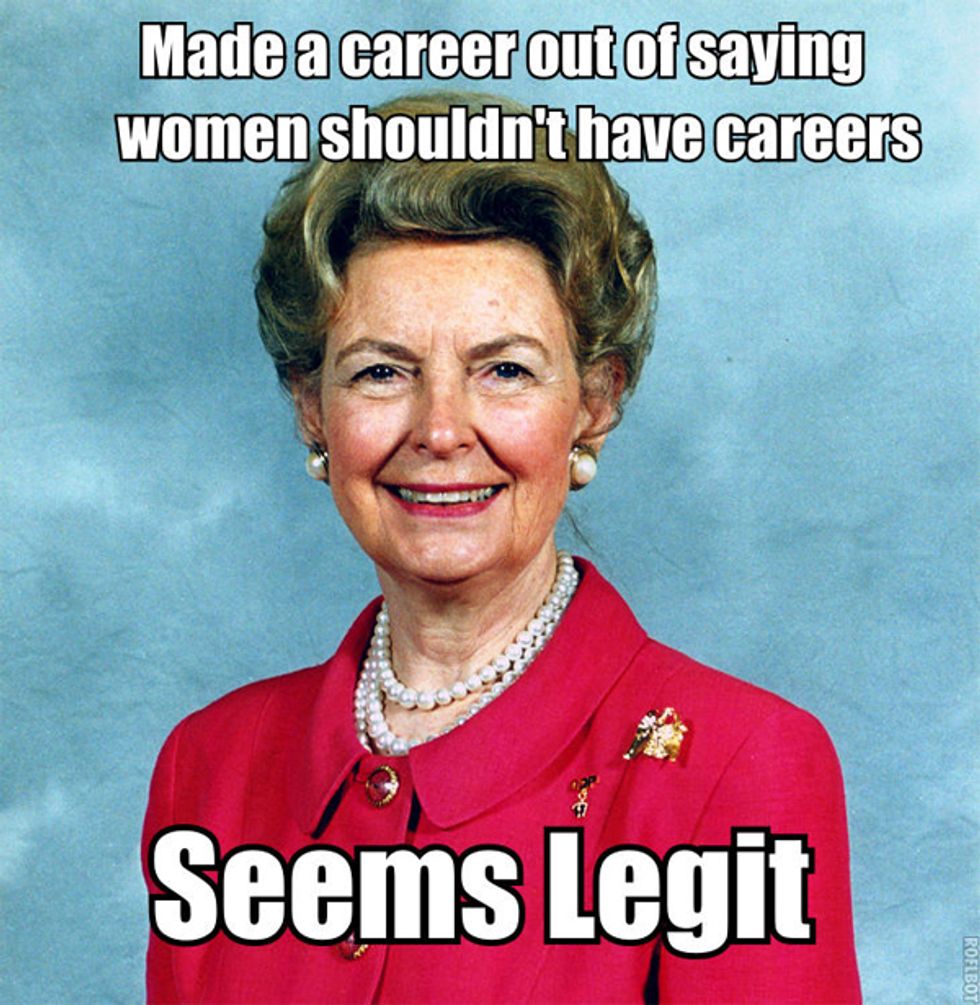 Veteranriot provocateur Phyllis Schlafly has a simple solution to two problems at once: If women are so all-fired worried about sexual assault and domestic violence, then they darn well better hurry up and get married instead of pursuing a career, since both rape and domestic abuse are caused by women having jerbs. Now, sure, even married men are still animals, but far less so, since a woman's touch calms them down a whole lot. Schlafly cleared all this up during her weekly radio program last Thursday:

We all know that married men can still be violent to their families, but they are far less likely to be violent against women than are live-in boyfriends.

Why is this? It’s true that women who have found men who are already better partners are more likely to marry them, but it’s also true that marriage settles men down. Being married makes a man care more about his family’s expectations and future because he sees his family as enduring. It also makes him more faithful and committed to his partner.

Without a good woman to control and drain off his animal lusts, a man is just a rape and violence machine. He just has no control over that, don't you know. It's in the Bible somewhere. So the sooner a gal gets married and gets out of the workplace, the less she'll have to worry about some brute swooping down on her, because married men protect their wives, usually with guns, we suppose:

So what’s the answer for women who worry about male violence? It’s not to fear all men. It’s to reject the lifestyle of frequent “hookups,” which is so much promoted on college campuses today, while the women pursue a career and avoid marriage.

You want proof that women in the workplace cause domestic violence and rape? Well, think about this: you never heard much in public about either problem before the feminist movement, now did you? QED, bitches.

Also, since we're still celebrating Molly Ivins's birthday, which was on Saturday, let us just recall that Molly said Phyllis Schlafly had "the most serious case of Episcopal thighs in America."