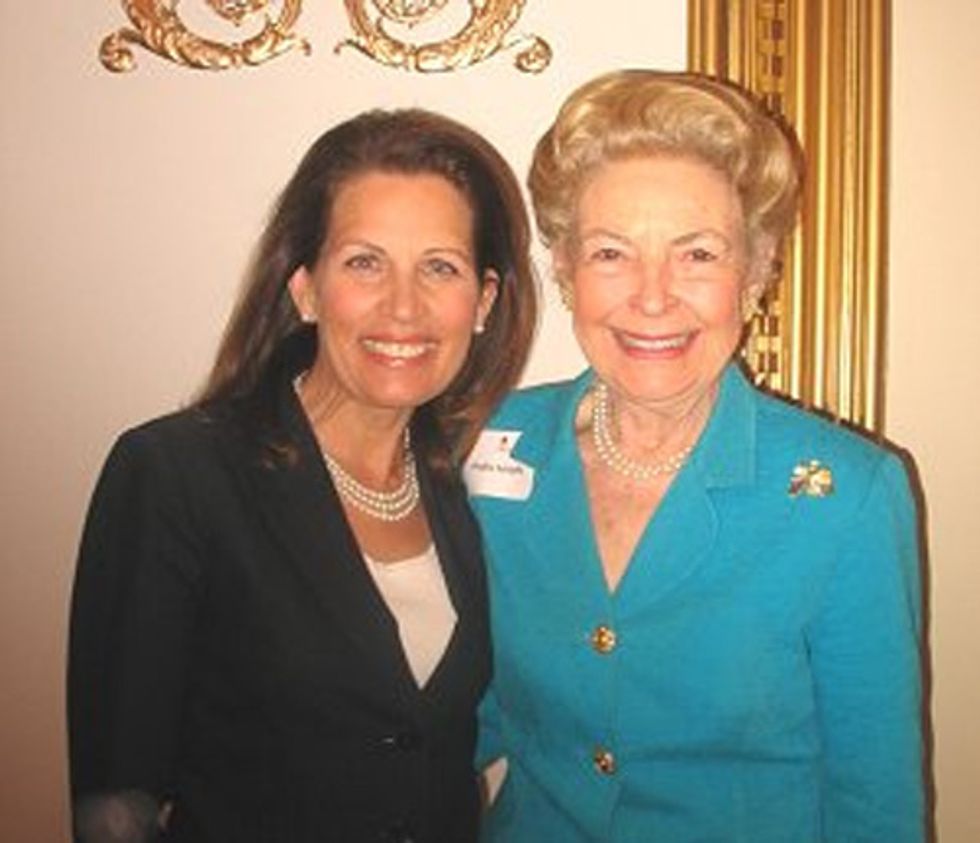 Conservative All-Mother Phyllis Schlafly (yes, she's still alive, stop being so surprised!) revealed Wednesday in an interview with Alex Jones that, in the continuing mishegas over control of the Eagle Forum, the rightwing group she founded, she once considered naming Michele Bachmann as her designated successor. Ultimately, however, she decided against it because Bachmann is too big a fucking moron even for Phyllis Schlafly.

[wonkbar]a href="http://wonkette.com/600543/phyllis-schlafly-fears-forbidden-love-for-trump-will-tear-her-awful-family-apart"[wonkbar]Schlafly said that she had originally been grooming her daughter, Anne Cori, to lead the group, but decided that she was not the best choice. Last week, a group of Eagle Forum members voted out Schlafly's preferred successor, Ed Martin, and replaced him with Cori. The dispute within the organization stems largely from Schlafly's decision to endorse Donald Trump, who, Schlafly told Jones, would "really kick the king-makers where it hurt." While the dissident board members haven't moved to oust Schlafly, she's certain that's their next move.

Schlafly also revealed that at one time, Bachmann was considered as a possible replacement, until Schlafly realized that a bag of hammers might do just as well:

[wonkbar]a href="http://wonkette.com/561494/michele-bachmann-thanks-phyllis-schlafly-for-ending-the-cold-war"[/wonkbar]It seems a rather shabby way to repay Bachmann, considering that old One-L had so generously named Schlafly "the most consequential female woman in public policy in the last 50 years of the 20th Century,” even crediting America's premier anti-feminist with ending the Cold War with Family Values. You see, without Schlafly's opposition to the Equal Rights Amendment, the Christian Right never would have been a thing. Had that not happened, Ronald Reagan might not have been able to tear down the Berlin Wall by shouting at it, and Marty McFly never would have made sure his parents met in 1955.

Schlafly went on to blame the pro-Cruz faction in the Eagle Forum for leaking the group's membership list to the Cruz campaign in a stolen droid, and alleged the rebel alliance, striking from hidden bases in the Dantooine system, are also trying to dislodge her sons John and Andy from her headquarters in the Death Star:

The only thing they’ve done is divide my family,” she said. “My daughter is with the group that is leading the assault on my leadership and they want to get rid of my son, so extremely valuable in my organization, one of them is both a lawyer and an accountant and he’s very good with the money, he always errs on the safe side of things ... Then we’ve got another son they want to get rid of and he’s the one who has written a lot of these amicus briefs that we’ve filed with the Supreme Court in important cases [...]

“I represent Eagle Forum and they tried to throw me out but, at any rate, I’m still here.”

Schlafly insisted that her rule would last for a thousand years, but then a clumsy technician in the InfoWars studio spilled a glass of water on her and she melted, the end.