Pittsburgh Police Chief Says No To Racism. Cops As Fine With This As You'd Expect 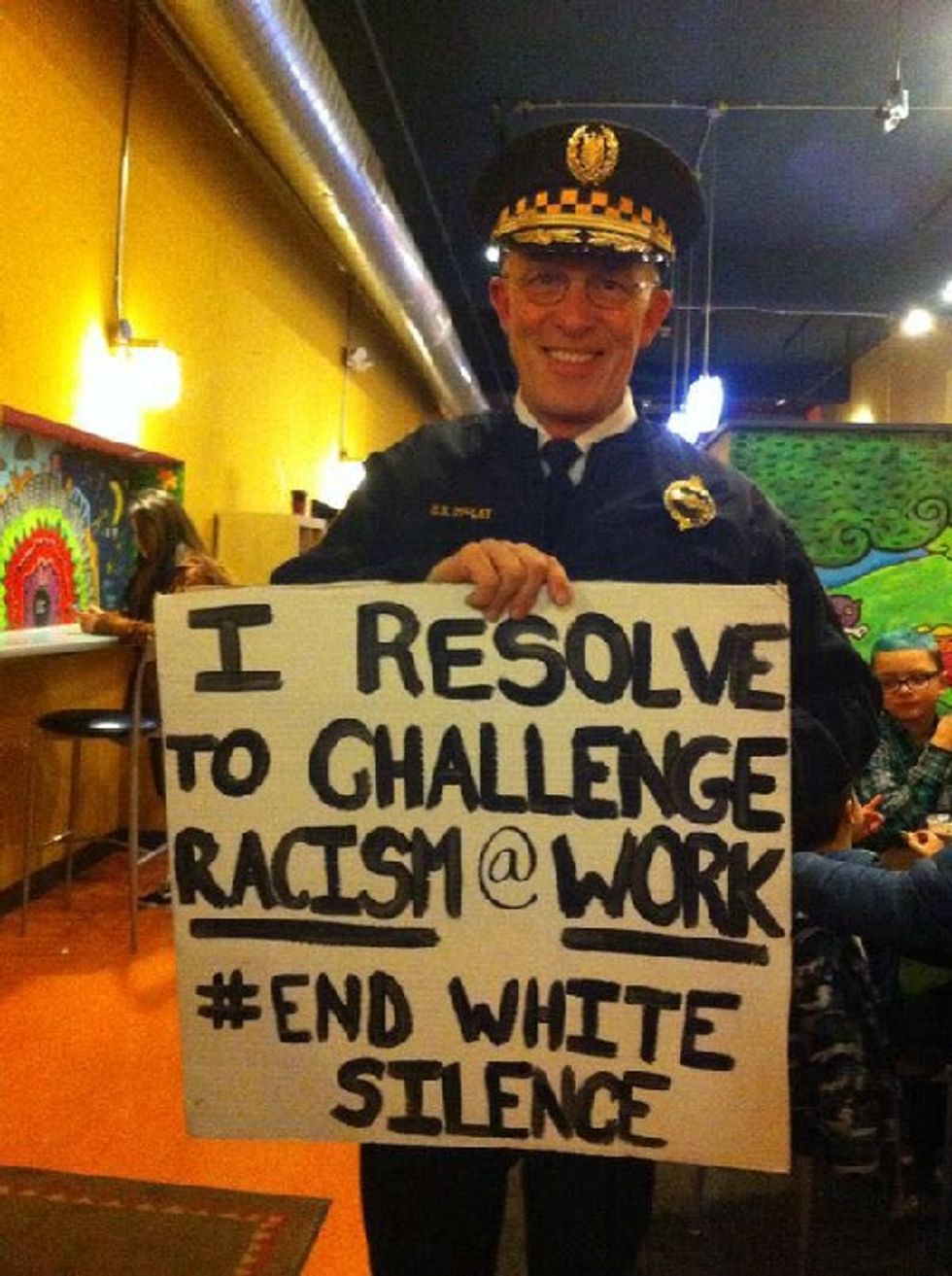 Yet another leader of a large police department is learning that you'd better not ever suggest that racism is a thing that exists, or you will be accused of Disloyalty to the Thin-Skinned Blue Line. In Pittsburgh, Pennsylvania, Police Chief Cameron Mclay is getting a lesson in how post-racial America works:

During a First Night celebration on New Year’s Eve in Pittsburgh, Pennsylvania, Police Chief Cameron McLay encountered some activists who were urging society to “unlearn racism.” He talked to them for a few minutes, and posed for a photo carrying a sign that says, “I Resolve To Challenge Racism @ Work. #End White Silence[.]”

Pittsburgh Mayor Bill Peduto came upon the photo while sitting at home and, viewing it as a “great way to start the new year,” promptly shared it on his own Facebook page. “I thought there was very little chance for someone to say this was the wrong message to send,” Peduto told the Pittsburgh Post-Gazette.

Obviously, McLay and Peduto have not watched Fox News since the inauguration of Barack HUSSEIN Obama. You see, if you suggest that racism is a thing still exists anywhere, what you are doing is attacking all white people, especially white people in blue. Worse, the pre-made sign someone handed to McLay to pose with said he'd fight racism in his workplace, which obviously means that he was accusing all Pittsburgh cops of belonging to the Klan. It wasn't just a sign that someone else made, dude, it was a manifesto!

Or so says Pittsburgh police union president Howard McQuillan, who read the generic anti-racism sentiment as the most scurrilous attack imaginable, as he told local TV station KDKA: “The chief is calling us racists. He believes the Pittsburgh Police Department is racist. This has angered a lot of officers.” And McLay obviously is singling out the honorable men and women of the Pittsburgh police, who put their lives on the line every day, because that's exactly what the sign says (no it doesn't), and it can ONLY mean that he thinks that every single cop is a racist, that hater.

McLay released a statement attempting to tell people to calm the fuck down:

I was hired to restore the legitimacy of the police department. I did not seek these young activists out. I was stopping for coffee at First Night. Their message is not anti-anybody. It is simply a call for awareness. The photo was a great, spontaneous moment in time. Please join dialogue for community healing.

KDKA reporter Marty Griffin claims to have an unnamed source in the mayor's administration who "has called the sign potentially very destructive, with no upside," which seems maybe a little at odds with Mayor Peduto's own decision to publicize the photo in the first place. In addition, Peduto's chief of staff, Kevin Acklin, said the mayor continues to support McLay and his efforts to foster better relations between the public and police. Why would he think that's needed? Is he saying the police aren't perfect? God, what a disgrace to the uniform he is.

Yr Wonkette would like to offer a revised version of the sign for Chief McLay, since apparently his officers are such delicate flowers whose feelings are easily hurt:

If this version still seems too accusatory, perhaps the Pittsburgh PD needs some training. Forget racial sensitivity training; they may need some basic lessons in not being a bunch of whiny titty babies.

Not that anyone, anywhere, is racist in Pittsburgh, or indeed anywhere in this great land of U.S. America. Except of course for that notorious hate group the NAACP.