Pizza Bigots Sharing Dough With Florist Bigot, Like Good Gay-Hating Jesus Would Do 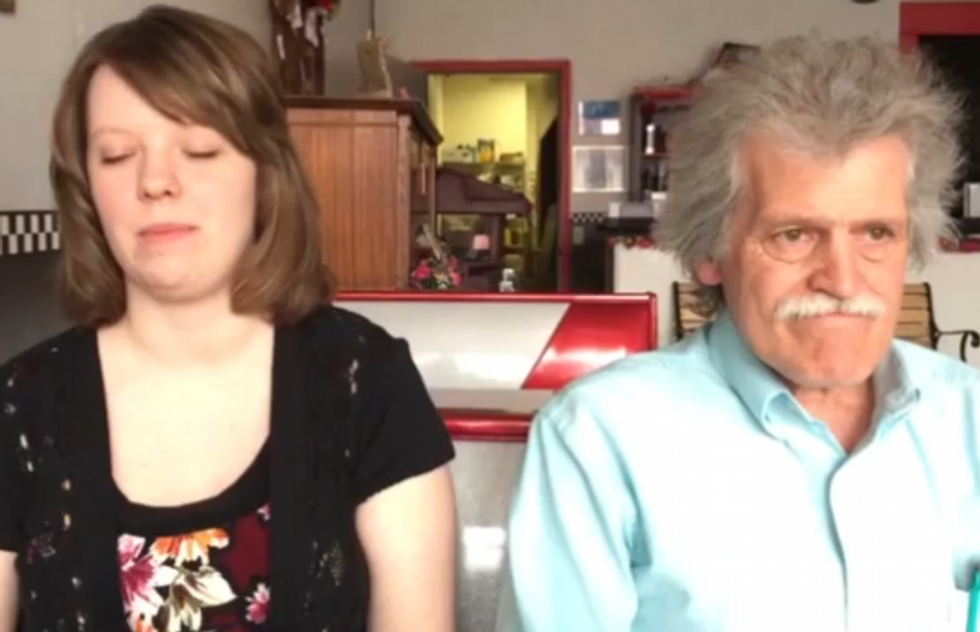 The Deliverance cast members who own that Indiana fag-hatin' pizza hole called Memories raised over $840,000 in bigot money on GoFundMe, for taking the bold stand that, were a gay or lesbian couple to visit them and say "please, our dream is to serve your shitty pizza to our wedding guests," they would refuse, because God Hates Fags. You will be glad (depending on your value for "glad") to know that they aren't just going to stick all that money up their butts; they plan to follow Jesus's command to help the needy and spread the wealth.

The "needy," in this case, is that Washington state bigot florist Barronelle Stutzman, who was recently fined $1,000 for refusing to stick a few flowers in a goddamn vase for actual gay-marrying customers. Stutzman, of course, has a GoFundMe of her own, with over $150,000 in donations accrued. Kevin O'Connor and his daughter Crystal, who own Memories, know that Jesus would want them to split their hate donations right down the middle, rather than doing something so jejune as feeding the fucking poor or something.

To be fair, the Daily Mail reports that the O'Connors will be giving some of their moneys to "some charities," but with fundies, you never know what that's gonna be. Maybe it will help the poor, maybe they'll send autographed pizza-stained Bibles to China. Dunno.

But Barronelle Stutzman definitely gets a slice (GET IT?). If you'll remember, Stutzman refused to sell flowers for the homo wedding of a gay man she had been serving for YEARS -- up to and including flowers specifically for his homosexual paramour -- simply because of her personal and intimate relationship with Jesus. A Washington judge ruled that no, that relationship, which we're sure is just great, does not give her a license to deny service in her flower shop, which is not in fact co-owned by Jesus Christ himself. Stutzman was even given an opportunity to settle, if she promised to stop being a bigot at work, but no, she is a martyr, just like all those Christians throughout history who have been murdered for their faith. Yes, it's a lesser case of martyrdom, much like a sniffle is a lesser case of stage 4 cancer, but let's not get bogged down in details.

Of course, the O'Connors and Stutzman now have a bond only shared by those who have gone through tragedy together. Usually, it's something like "we were stranded in the same airport during 9/11 and couldn't get in touch with our families, we are now forever friends," but being LITERALLY HOLOCAUSTED over your mutual fag hate is the same.

Crystal O'Connor acknowledges that she probably hasn't gone through as much as Jesus did on the cross:

Crystal said: I was asked a hypothetical question and that was the answer I gave. But I didn’t hope to gain anything by saying what I said.

I wasn’t trying to score points. It is something I believe in from my heart and my faith about gay weddings. But I don’t regret what I said.

I have been scared, but God is giving me strength. I think it is nothing compared to what Christ had to suffer.

Glad she's got some perspective. Her dad is pretty sure he's got his priorities straight, confirming that no, none of their pepperoni dough creations will ever be used to consummate a gay marriage, like he can even control that. Gays and lesbians are NOTORIOUS for picking up pizza on their wedding nights, to take on their honeymoons. He also says that if one of his children ever came out of the closet, he "would still love them, but Daddy wouldn’t be going to the wedding." Ah, Fundamentalist Christian love is so inspiring! We love our child, but we won't be there with them on the best day of her life, because EW GAY.

Wonkette would like to take this opportunity to remind readers that when you give US donations, we never share them with Barronelle Stutzman, the O'Connors, or anybody else like that. It all goes DIRECTLY to Marcus Bachmann. So why don't you go ahead and help push back against the hate and give us $3, or another amount of your choosing? Daddy Bachmann needs a new pair of dancin' shoes!