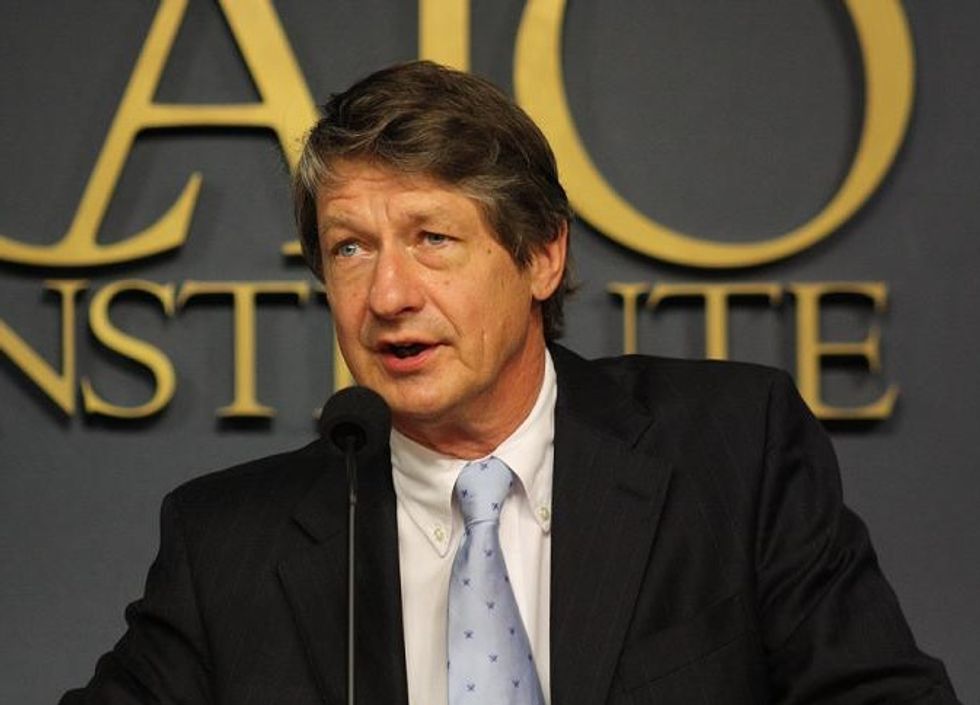 P.J. O'Rourke, the conservative polemicist whose books unaccountably get shelved in the "humor" section, made a very serious announcement this weekend on National Public Radio's news quiz show "Wait Wait...Don't tell Me!" And what is that announcement? You needn't wait, for we will tell you: He endorsed Hillary Clinton for president, because however much he loathes her (which is a full Benghazi hearing's worth of loathing), she is at least an actual human politician, not the fur-bearing crapsack the Republican Party will presumably choose as its nominee. Here's the audio; the endorsement bit comes shortly after the 3-minute mark:

I mean, my whole purpose in life basically is to offend everyone who listens to NPR, OK? No matter what position they take on anything, like, I’m on the other side of it, you know.

Tom Bodett: That is a ringing endorsement!

O’Rourke: I mean, this man just can’t be president of the US. I mean, they got this button, it’s in a briefcase, he’s gonna find it.

Peter Sagal: They can't hide it. It'll be like a teenager with your booze.

We like that bit at the end about Donald Trump finding The Button. That works quite nicely. Surprisingly, the most biting comment of the whole show wasn't even the "endorsement" of Hillary; it was host Peter Sagal's introduction of Tom Bodett as "A man of few words, especially recently published ones." Ouch.

We'll confess to a bias here: we still have not forgiven P.J. O'Rourke for running National Lampoon into the ground when he was editor. It was a perfectly good satire magazine when they handed it to him; don't talk to us about a "changing magazine marketplace" or "staff moving on to other gigs" or "Michael O'Donoghue and Doug Kenney dying," or other factors, damn it, we blame O'Rourke! OK, him and all those awful movies they made after Animal House (fine, and Vacation, although the original short story by John Hughes, "Vacation '58," was still better). And even though he didn't write the "O.C. and Stiggs" stories, they happened on O'Rourke's watch, for which he cannot be forgiven.

In addition to wrecking NatLamp, P.J. O'Rourke is "America's Leading Satirist," at least according to the Cato Institute, for whom he wrote the most unhilarious legal brief ever filed in American history. Every few weeks he's on "Wait Wait," and then he returns to his home in Obscurity, New Hampshire, where he keeps churning out stuff that someone, somewhere finds funny. But we're not very good at appreciating rightwing humor anyway.

Did we digress? What we are getting at is that Donald Trump is so awful that not even P.J. O'Rourke can bring himself to support him, which is a pretty remarkable achievement. We could talk more about O'Rourke and how he brought low a great magazine from its heyday, but suddenly we are run over by a truck.