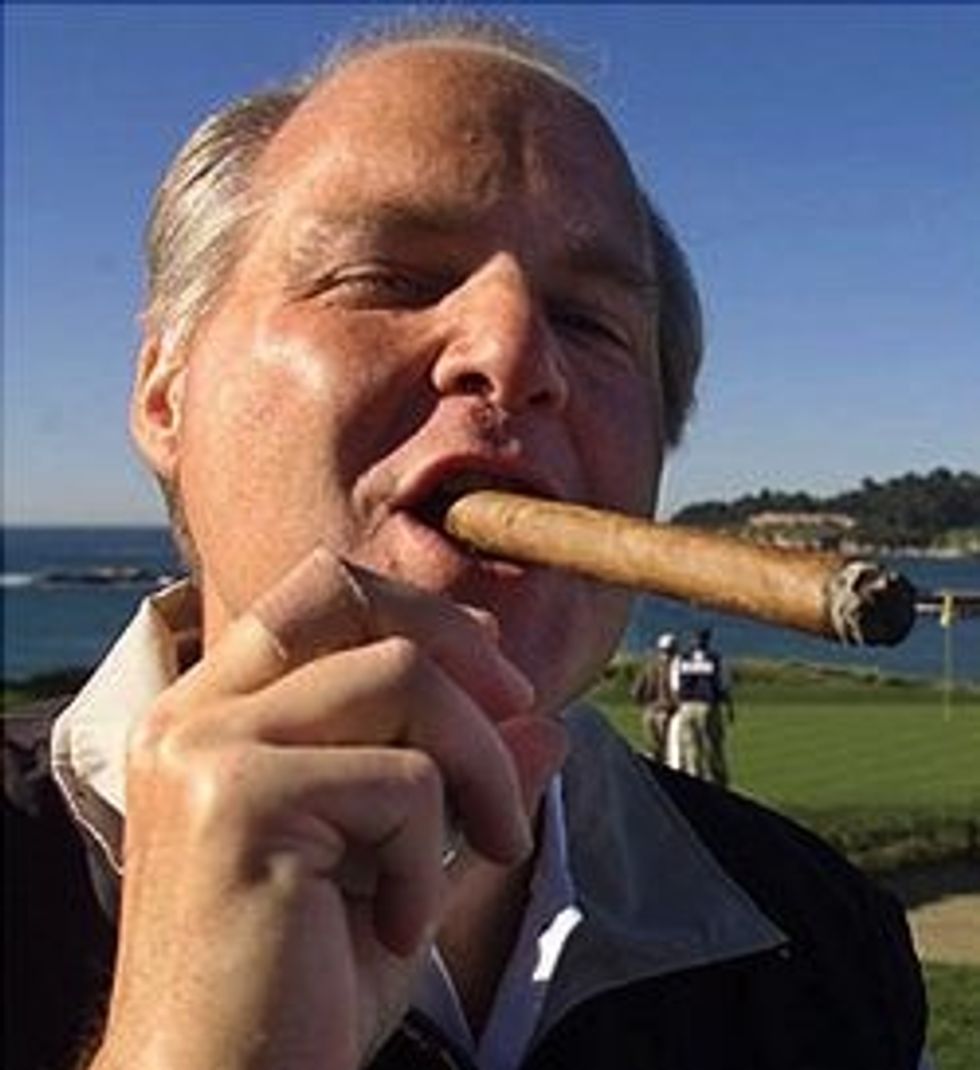 Well, kids, we've cracked the code on today's Republican talking point: boobie-staring freedoms and how the liberals are trying to take even that away from us. First, the Daily Callerreported that progressives are trying to "take away our activities" of staring at boobies, which is a "freedom" right there in the Constitution (written in invisible ink, apparently) gifted to us by James Madison and Thomas Jefferson.

And now Rush Limbaugh is here to also vomit words about boobie-staring freedoms, but he has a modest proposal for how to fight back against the scourge of freedom-killing liberals:

So let me offer a first suggestion, the first way to deal with this that came into my mind. You find yourself staring, looking at, casually glancing at a woman, but you know that it's now socially taboo. You shouldn't be doing it. And you think everybody is noticing you doing it and condemning you in their minds. You shouldn't -- so you walk up to the woman and say, "Will you please ask your breasts to stop staring at my eyes?"

Try that. Might help. And you don't know 'til you try it.

It is merely "human nature," Rush explained, which liberals "just despise ... and try to alter it and change it and create it." Everyone knows the only acceptable way to alter human nature is to pop some illegally obtained Viagra to make your naturally limp dick, which God saw fit to give you since everything comes from him obviously, more turgid. Ahem.

So bravo and thanks, Rush, for this brilliant solution to the problem of sexual harassment. Gosh, if only it had been around way back when Clarence Thomas was doing sexual harassment to Anita Hill (because yes, he SO did that). "Please make this pube on my Coke can stop staring at me." All that messy high-tech lynching could have been avoided.

Or, and we're just spitballing here, maybe the solution is for men to resist their "human nature" just the teeniest tiniest bit and not be leering creeping terrifying molesters making that gross spitty teeth-sucking sound when women walk by! Maybe these men -- who are, according to conservatives, literally incapable of controlling their own eyeballs -- could take some personal responsibility for their actions, since conservatives are so very into when they are talking about other people who are not them, and stop blaming innocent breasts for slapping Rush Limbaugh's eyeballs in the face.

Try that. Might help. And you don't know 'til you try it.