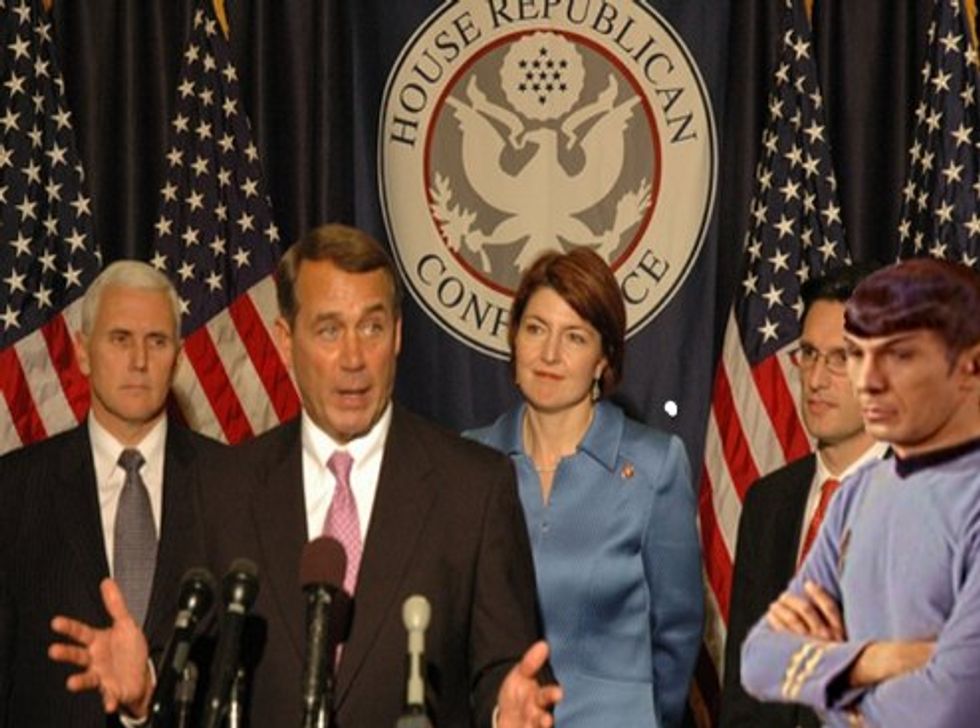 Augh, summer. The heat makes everybody so agitated! Across America, politicians, ex-politicians, and the politician-adjacent have all been feelin' extra litigious. In today's Politigation Roundup, we bring you the beginning of one stupefyingly expensive and pointless lawsuit launched from the bowels of the House Republican Caucus, the end of another lawsuit by a former Governor and current semi-famous crazy person, and the hollowest, most eyeroll-inducing of lawsuit threats from a blogger/activist/twerp in Mississippi who doesn't like actual journalists putting his name in the paper next to the stuff he does.

The House of Representatives has held 51 votes to repeal the Affordable Care Act. All those votes have failed, each one a tragedy for our nation. The Republicans just want to protect us. You might say it's illogical that they now want to take Barack Obama to court for not inflicting this tyrannical law quickly enough, but you would be wrong.

Congressman Pete Sessions of Texas was put in charge of making the Republicans' final case on the House floor for suing President Obama over his decision to delay the employer mandate in the ACA, which they say amounts to writing a whole new law, which is the job of CONGRESS, which they will do when they feel like it, Mom, but which they will sue you for doing instead.

Pete and his friends had some compelling and not at all hyperbolic arguments in favor of spending millions of dollars on lawyers for a lawsuit that is doomed to fail. Sessions himself started out with at least one pre-refuted lie about the President by throwing in the long-debunked Romney attack that he's ditching work requirements for welfare recipients:

By circumventing Congress, this President's actions have marginalized the role that the American people play in creating the laws that govern them. Specifically, the President has waived work requirements for welfare recipients, unilaterally changed immigration laws, released the Gitmo Five without properly notifying Congress, which is the law, and ignored the statutory requirements of the Affordable Care Act.

Obama better be grateful they're only suing him for one of those things! (For now.) Still, Republicans want you to know that Obama is up there in the White House, just cold kinging himself like a game of political checkers and pretty soon we'll be right back to a monarchy. Tom Rice of South Carolina reminded us all, darkly, "One man who can both make the laws and enforce the laws is a king, not a president."

Jeff Duncan (R-TX) cited the inherent sinfulness of the human race to explain why letting Obama torch the separation of powers would undo all the hard lessons we learned during the Revolutionary War and also in the Garden of Eden:

Our Constitution does not say that the President gets to write his own laws. Our founders knew that was a bad idea. They had seen kings wield that kind of power and they didn't want that for the new nation. They understood that too much power in the hands of any one person or any one group would inevitably lead to tyranny. As Christian men of the day, they understood that since the Garden of Eden, man is fallen, and that fallen men, once they have a taste of power, will always lust for more. They knew that power corrupts and absolute power corrupts absolutely, so in their understanding of fallen men, their remedy was a system of checks and balances.

Petey's Peeps were facing off against Democrat Louise Slaughter of New York, whose gang did not shy away from Very Serious Terminology of their own to describe the motivation behind the lawsuit. In her opening, Slaughter called it "political theater... designed to appease radical Republicans clamoring for impeachment."

Carrying on the theme, Sheila Jackson Lee of Texas declared the resolution "a failed attempt to impeach the President. I'm willing to say that word." Steve Cohen branded it "Impeachment Lite." Debbie Wasserman Schultz sighed: "I wish I could say this was politics at its worst, but I have heard too many in the Republican majority raise the specter of impeachment not to know better."

Sander Levin, everybody's favorite uncle from Michigan, put it succinctly as the vote neared: "It is the House Republicans who should be sued, if that were possible, for their abdication of their responsibilities to the people of this nation." (Is that possible? We should do that if it's possible. We will ask the Wonket legal team, down at the bar for "lunch," what they think and get back to you.)

Naturally, the resolution passed. The New York Times called it a "party-line" vote, but actually five Republicans had the 'nads to vote against it! Two of them, Wonkette favorites Paul Broun of Georgia and Steve Stockman of Texas, are leaving in January anyway after failed Senate primary runs, and all five will have no one to eat lunch with for awhile (though tea party freshman Tom Massie is probably already in the Solo Sandwich club). Watch for a drawn-out lawsuit at great (taxpayer) expense that is likely to really take off, let's see... oh, right around the time of the mid-term elections! Pure coincidence.

Jesse Ventura Wins $1.8 Million Defamation Suit, Ensuring Nobody Will Ever Talk Bad About Him Again

Jesse Ventura has made a career out of kickin' back since he left the Minnesota Governor's Mansion (which was a bit worse for wear from his son's hard-partyin' ways). His most notable post-gubernatorial venture, Conspiracy Theory with Jesse Ventura, ran for three seasons on TruTV, and since then he's been bouncing around writing books, campaigning with Kinky Friedman in Texas, and calling Bush and Cheney water-torturers. Seems pretty chill! So why would he interrupt his permanent vacation to go around suing another ex-military man?

Ventura was described in a book written by the killingest sniper known to America, Chris Kyle, as a guy who mouthed off in a bar full of Navy SEALs that SEALs weren't so great and needed to get their ranks thinned a bit and then supposedly got clocked by Kyle. Ventura was called "Scruffy Face" in the book but was later named in interviews and then sued Kyle for defamation, claiming it was all a big lie and that it hurt his reputation to have people think he did not love all Navy SEALs. (Or that he could get punched out by anybody.)

After Kyle was killed in Texas in a shooting range shooting rampage, Ventura continued the suit against Kyle's estate, claiming the "unjust enrichment" Kyle gained from book sales was not stopped by his death. It is difficult for an outside party not privy to All The Facts to judge the truth of the matter, since there are dueling witness affidavits about the events in the bar, but this week a three-week trial ended with victory for The Body in the form of a $1.8 million award for defamation. So, success? Ventura says there are "no winners" since he doesn't think the verdict will do much to repair his reputation with "an entire generation of young SEALs" who will continue to think he's a loudmouth jerk with a scruffy face.

Chuck Johnson, Award-Winning Journalist, Will Sue You Reporters For Reporting on Chuck Johnson

Charles C. "Chuck" Johnson is a Twitter-based life form. He is also an Award-Winning Journalist who "isn't registered to vote" and is so, so irreverent, you guys. (He told Harry Reid to "google me, prick"! Edgy!) He has a website, GotNews.com, and has spent the past couple of months getting underfoot in Mississippi's messy Senate primary race as an unabashed cheerleader for sore loser and guy-who-makes-Thad-Cochran-look-good Chris McDaniel. Chuck had a MEGASCOOP that a local pastor was hired by Cochran's campaign to buy votes from the black community, but the pastor later recanted the story, so maybe he was just using Chuck for his money. Oh yeah, Award-Winning Journalist Chuck Johnson pays his sources, which is a policy that encourages honesty and trust!

Chuck does not care at all for BuzzFeed, which apparently goes back to a post they did about him when he was peddling the story that Cory Booker didn't really live in Newark while he was Mayor of Newark. When the admittedly schadenfreudelicious story about Benny Johnson's serial plagiarism came out, Chuck decided it was time to declare war and put out a $100 bounty for instances of plagiarism by anyone at BuzzFeed. Chuck was on it! In mere days, BuzzFeed would be a pile of rubble!

Chuck's campaign for internet justice was interrupted by Sam Hall, frequent Chuck-taunter and reporter for the Clarion-Ledger in Jackson, Mississippi. So Chuck was out to catch plagiarists? How about the photos that Chuck was using without permission or attribution on his totally-not-fake news site GotNews?

Chuck Johnson does not like you, Sam Hall. He does not like you paying attention to the things he writes and desperately wants attention for. He does not like you pointing out that he is doing the thing that he is calling terrible when other people do it. And he has instructed his "counsel," who we are guessing just squeaked through Liberty University Law School and is totally going to pass the bar this time, man, to "begin the process of suing" Sam Hall and, why not, probably everyone else at the Clarion-Ledger and probably all of you, too, just for reading this.

Chuck Johnson will not be mocked. You have been warned, America.