Poor Donald Trump Being Sued By Apprentice Lady He Defamed, And His Most Excellent Lawyer Is ON THE CASE 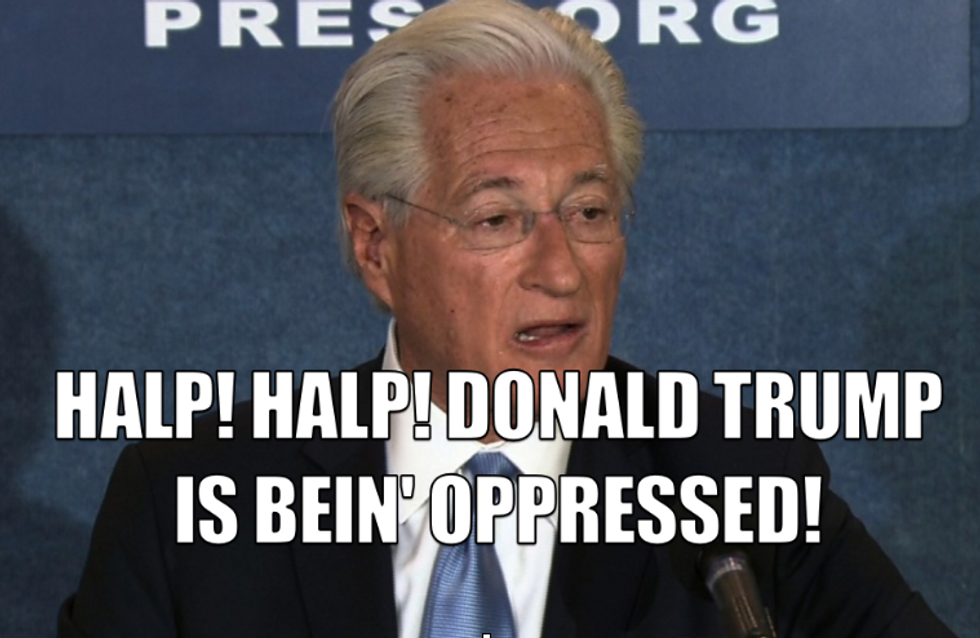 THE STUPID! IT BURNS! We just read through the latest pleading in the defamation case against Donald Trump brought by former Apprentice contestant Summer Zervos, one of the gajillion women who said, "Donald Trump sex-groped me against my wishes!" If we never hear the name Marc Kasowitz again, it will be too soon! But for you, Wonkers, we will summarize this piece of dreck drafted by Trump's most favorite lawyer, who knows that the real victim here is President Pussgrab AND NOT THOSE FLOOZIES WHO ARE ALL JUST OUT TO GET HIM FOR POLITICS AND THEIR MOMENT OF FAME AND BECAUSE FEMINAZI GLORIA ALLRED PUT THEM UP TO IT AND HILLARY PAID THEM WITH URANIUM!!!!!

Kasowitz's pleading has all the usual crap men say when they're slagging women. She's a liar, she didn't act like a victim, she's got ulterior motives, BLAHBLAHBLAH. Also, too! He never called her a liar. And if he did, it's not actionable. And if it's actionable, she deserved it. Third verse same as the first.

Many people are saying that you can't sue Donald Trump in state court while he's President, believe me. It's different from the Paula Jones case, because that suit was in federal court, see?

If you stand on your head and squint real hard ... THIS STILL MAKES NO SENSE AT ALL. But it's marginally less offensive than Donald Trump, a guy who watches six hours of television every day and has spent a third of his presidency on a golf course, claiming that he's just too busy to be sued right now. No time for litigation, guys! Gotta livetweet Fox'n'Frenz!

With the preliminaries out of the way, Kasowitz was ready to move on to some of his edgier material. Did you hear the one about political speech protecting defamation because of the First Amendment? You see this guy walks into a bar, he says, "I'm running for President and that woman's a liar." But he can't be sued because FIRST AMENDMENT! Get it???

This is a politically-driven action, brought against a sitting President for exercising his First Amendment right to speak on political and public matters concerning, among other things, his own qualifications for President, the media’s role in the election process, and the tactics of his opponent, Hillary Clinton.

And everyone knows that making shit up online doesn't count! Why are you censoring Donald Trump's God-given right to barf out lies on Twitter, you fascist?

Nor can Ms. Zervos refute the fact that all of the Statements occurred on political forums -- a campaign website, on Mr. Trump’s Twitter account, in a presidential debate, and at campaign rallies -- where the listeners expect to hear public debate, taken as political opinion rather than a defamatory statement.

Good luck with that one, buddy.

Marc Kasowitz knew he had to stick the landing. The Old Man's been giving him the side-eye ever since he got booted out of the White House for being an unhinged lunatic. So he put on his thinking cap and came up with A PLAN.

Summer Zervos is a resident of California, which has a really strong anti-SLAPP law. SLAPP stands for Strategic Lawsuit Against Public Participation, and California's law aims to protect the little guy from being sued into silence and poverty when he criticizes corporations or powerful interests. Among other things, California's SLAPP law forces the loser in a defamation suit to pay the winner's legal fees. Occasionally, courts from one state will apply another state's laws because ... reasons. So Counselor Chutzpah, JD Esquire, would like the New York Court to apply California's libel law, 'kay? Because the US president's free speech rights are being trampled by Summer Zervos, and he needs the protections of California law or the terrorists win. And WE. CANNOT. EVEN. with Donald Trump, a guy who has filed dozens of SLAPP suits himself and has declared his intent to "open up the libel laws" so that he can sue journalists "and win lots of money" whining that someone is abusing the legal system to shut him up. A+ trolling, Mr. Kasowitz. Really, you have outdone yourself this time, sir!

And now we feel dirty and understand why the people who write this stuff spend so much time daydrinking. ALLEGEDLY.

Ewwwwwww! That was gross! Give us money, please!