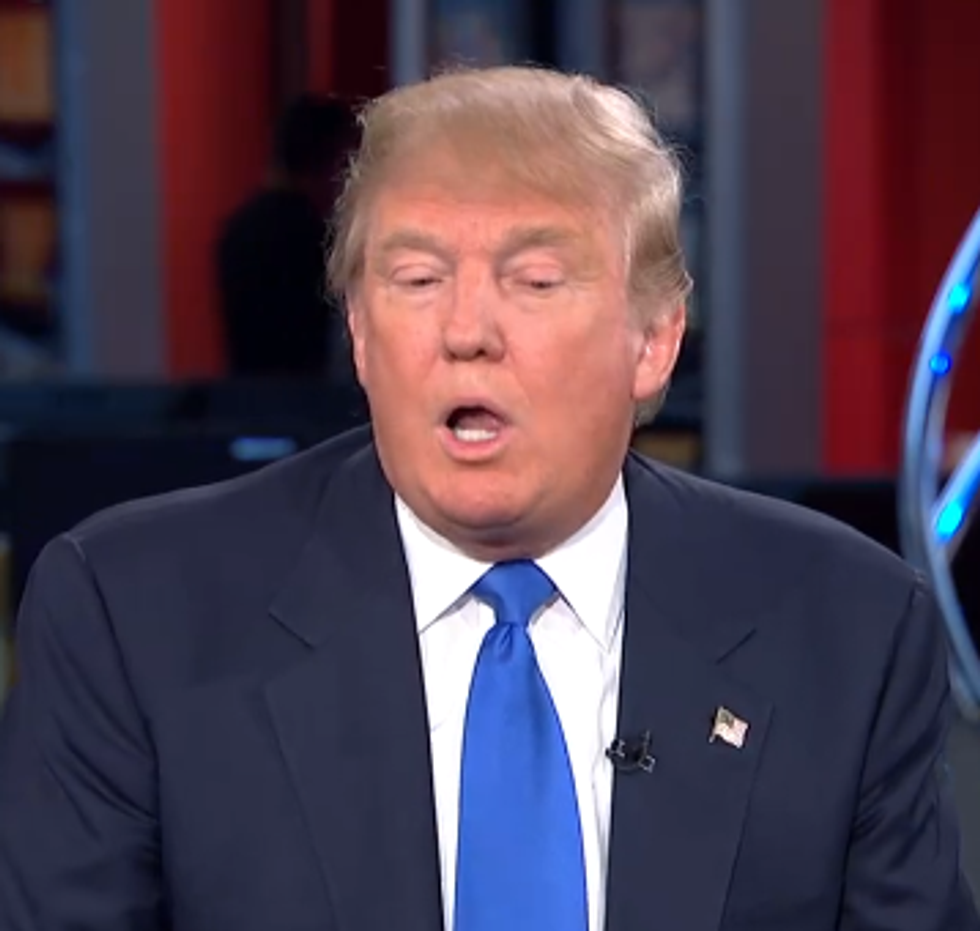 There is no violin tiny enough for this sob story from Donald J. Trump, TEN BILLIONAIRE! Thankfully, Trump has been such a YOOOOGE success in his life, against all odds -- everyone knows how hard it is for a white Christian son of a millionaire to catch a break in America -- that he could afford to commission one, if he so chose, from the world's greatest violin maker, and it would be gold and classy and even more beautiful than a door in the DONALD J. TRUMP WALL between Mexico and America, through which Mexicans of the non-rapist variety would be allowed to pass back into Donald Trump's America, after he personally verifies their value and ability to help Make America Great Again. Like it says on his hat.

Grab your hanky, folks, for this jerker, of tears:

Can you people even imagine the hardship of having nothing but your own bootstraps to help you achieve the great American dream -- plus a million bucks from your dad? Hell, the only other person in America who can probably understand that kind of struggle is Willard Mittbot Romney, who also had to make it all on his own, with nothing but a stock portfolio from his dad, the governor, worth only about $377,000 in today's dollars.

It's rather awe-inspiring when you consider the obstacles young Donald had to overcome, what with being shipped off to military school, where he got all that "military experience," for being a child-sized dick. And what a shame he couldn't even put all of his military training to use, by serving in the Nam, on account of how he had all those deferments for college and then for a severe medical condition in his foot. Not that he can remember which foot, but it was definitely one of them. Perhaps the one he's so often sticking in his mouth.

Lest you think Trump's self-pity for the "small" loan of a mere million bucks was some sort of unintended gaffe he will later blame on an intern who does not actually have access to Trump's mouth, Serious Journalist Matt Lauer gave Trump the opportunity to walk it back, which Trump promptly shoved right up Lauer's ass because come ON, it was only a million dollars!

LAUER: Let’s just put this in perspective. You said it hasn’t been easy for you, but "My dad gave me a million dollar loan." That probably is going to seem pretty easy to a lot of people.

TRUMP: You’re right. But a million dollars isn’t very much compared to what I’ve built.

We are already looking forward to the presidential run of young Barron Trump (seriously, who the fuck names their kid Barron?), who will one day share his tragic tale of woe and how he made it all on his own with only a billion bucks from his dad, and a lifetime supply of caviar moisturizer from his mom. Sasha Obama's going to have to come up with a far more compelling tale of overcoming adversity if she's going to beat him in the 2044 presidential election.

UPDATE: In reality, Trump borrowed $10 million from his father.