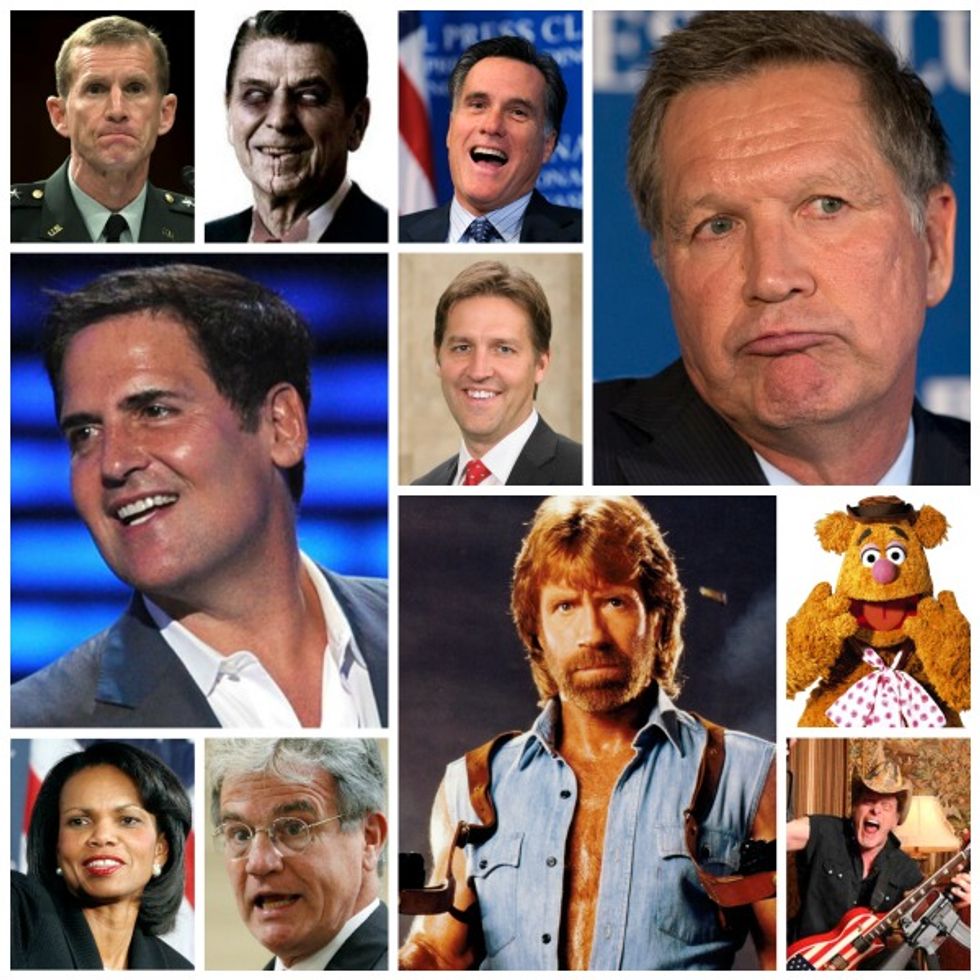 We decided we were going to write about the #DearGodInHeavenNotTrumpPleaseAnyoneButTrump movement, but then we remembered we had just written about it last week. What we failed to realize, however, is that the third-party silliness would accelerate at such a rate that we'd have enough fodder for a whole new post just a few days later. The flaming toxic trash fire that is the GOP right now is pretty much job security for political bloggers. Silver lining, y'all.

We thought things couldn't get much dumber than "Draft Mitt" or "here is a Rube Goldberg-like series of events where Paul Ryan becomes President" but we really underestimated how terrified and hilarious the GOP is. Their flailing knows no bounds.

Part of why this is happening, most likely, is that there is a whole group of wingnut welfare recipients that really see themselves as kingmakers and are furious -- FURIOUS -- that the party won't listen to their words of wisdom.

[T]hese Republicans — including commentators William Kristol and Erick Erickson and strategists Mike Murphy, Stuart Stevens and Rick Wilson — are so repulsed by the prospect of Trump as commander in chief that they are desperate to take action.

Yes, because if there's one person that the party should be listening to right now, it's Bill "I foisted Sarah Palin upon the world" Kristol. He's for sure got the magic touch.

Who are the latest contestants in this game of "let's pretend we won't all just fall in line behind Trump eventually"? Well, Mittens isn't really a contestant as much as a ringleader. And who does Mitt want? Some sure-fire winners for sure.

Their top recruiting prospects are freshman Sen. Ben Sasse (R-Neb.), a conservative who has become one of Trump’s sharpest critics, and Ohio Gov. John Kasich, who withdrew from the Republican presidential race May 4. Romney is among those who have made personal overtures to both men in recent days, according to several people with knowledge of the former Massachusetts governor’s activities.

Haha Ben Sasse is that doofus who wants to move the United States Capitol to his home state of Nebraska and John Kasich is the guy who somehow ended up with fewer delegates than Marco Rubio. Bold choices, Mitt!

What else you got, NeverTrumpettes?

The recruiters also delved into the world of reality television for someone who might out-Trump Trump: Mark Cuban, the brash billionaire businessman and owner of the Dallas Mavericks basketball team. [...]

“I don’t see it happening,” ­Cuban wrote in an email.

Cuban, a cast member on “Shark Tank,” the ABC reality series in which entrepreneurs pitch investors about their business ideas, said his pursuers — he declined to name them — have told him that his “bluster and volume, combined with substance and the ability to connect with voters on a more personal basis,” could make him a winning candidate.

“He could come after me all he wanted, and he knows I would put him in his place,” Cuban said of Trump. “All that said, again, I don’t see it happening. There isn’t enough time.”

The rest of the prospects are like a Who's Who of people you hoped never to have to hear from again.

You know, we'd almost feel sorry for them, except that then we remember that these people are all terrible horrible people who aren't qualified to be president of the local dog-walkers club, much less leader of the free world. That said, we're totally in favor of the GOP shooting itself in the dick by finding some sucker to be their third-party candidate, because that can only benefit the Dems come November. Onward and Downward, anti-Trump forces! We believe in you!