Pope Francis Hated 2017 As Much As You Did 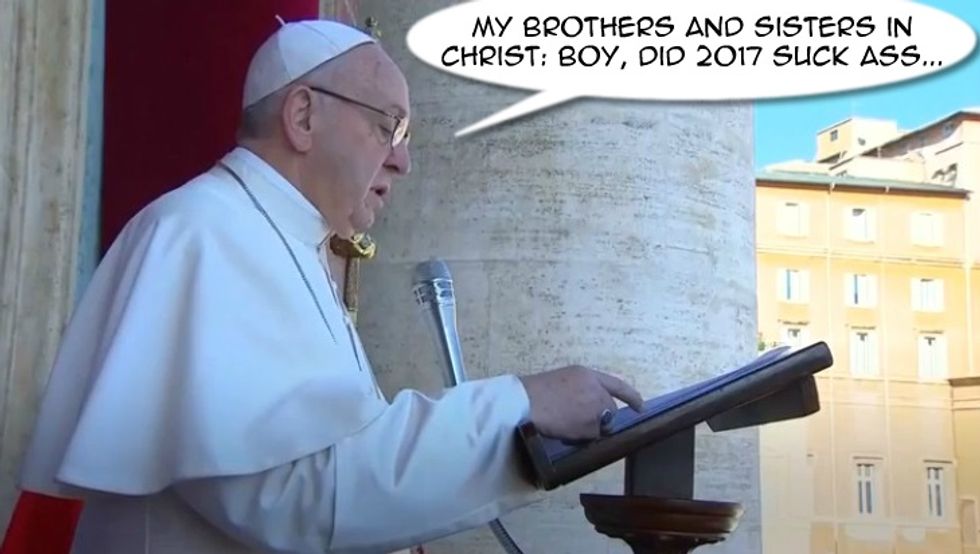 I know better than to ask how 2018 could get worse

In his final public message of 2017 on New Year's Eve, during evening vespers in St. Peter’s Basilica, Pope Francis called 2017 a true shitstorm of a year in which the Damned Human Race (OK, that's Twain, not Francis) had been handed a "whole and sound" year by God last January first, but just look what you did with it. We just can't have nice years if you're going to treat them like this:

"[We] humans in so many ways ruined and hurt it with works of death, with lies and injustices."

“The wars are the flagrant sign of this repeated and absurd pride,” he said. “But so are all the little and big offenses against life, truth, brotherhood, that cause multiple forms of human, social and environmental degradation.”

Francis added: “We want to, and must assume, before God, our brothers and Creation our responsibility” for the harm.

Francis refrained, for the moment, from falling to his knees and sobbing in the sand, "YOU MANIACS! YOU BLEW IT UP! AH, DAMN YOU! GOD DAMN YOU ALL TO HELL!!"

The Pope didn't name any particular orange-faced simians in the greater DC Metro area as the focus of his comments, so he probably meant everyone but Donald Trump, with whom he really gets along great:

Despite being a big Debbie Downer about all the war and death and killing the environment, Francis did at least say that "gratitude prevails" because of people who "cooperate silently for the common good," such as parents and teachers who work to raise the young with a sense of ethics and responsibility, and to for chrissakes pick up after themselves and think about other people for once in their lives, is that too much to ask?

On New Year's Day, the Pope celebrated a Mass to mark the church's World Day of Peace, then presumably went back to his apartment in the Vatican to have a good cry. And then he just rolled his eyes at that one cardinal who keeps saying "Lighten up, Francis" like it's original or something.