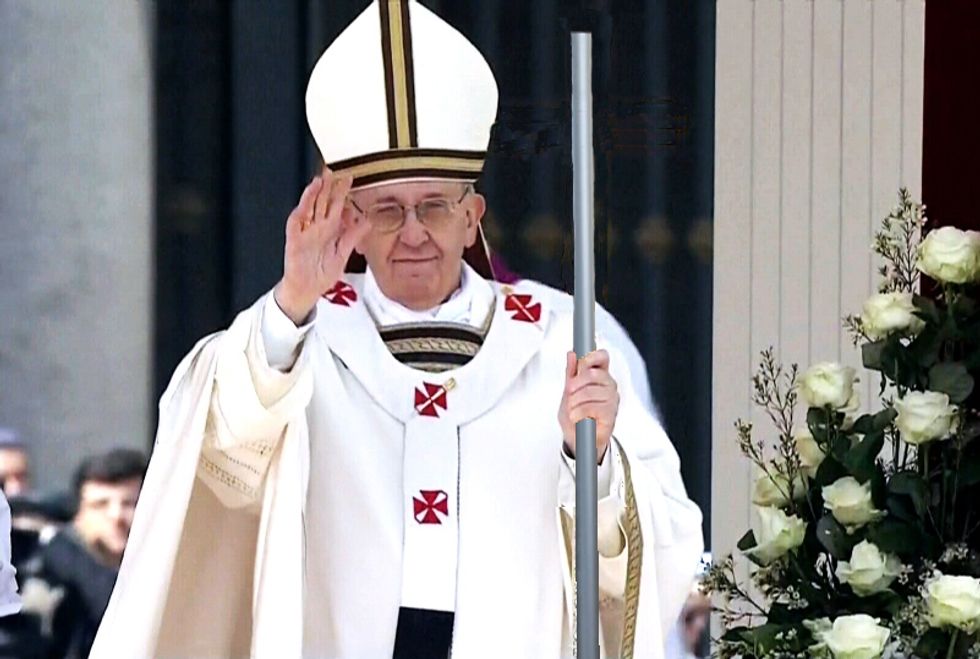 The Vatican-induced whiplash continues! Pope Nice-Nice is mad-mad and he's not going to take it anymore, we guess, from ANYBODY. Can everybody just please let him do his undercover-poping in peace? In the wake of the pope's little non-meeting with Kentucky clerk Kim Davis, where he kind of nodded in her direction and said, "Git 'er done," but in Popish, even though he had no idea what specifically he was telling her to git done, the drama continues.

First we have reports that the guy who set up the Kim Davis thing, Archbishop Carlo Maria Viganò, who's known as the "papal nuncio" (that's a silly foreign word for "envoy," which is a silly French-based word for "PR lady"), will probably get super fired very soon:

Archbishop Viganò is turning 75 in January, the age at which bishops must submit a formal request to the Vatican asking for permission to resign. These requests are not automatically accepted, and bishops often stay in their appointments well past age 75. But if Archbishop Viganò is held responsible for what is seen as a grave misstep on an important papal trip, he is likely to be removed at the first respectable opportunity, according to several church analysts. [...]

The meeting with Ms. Davis was clearly a misstep, [Dr. Massimo] Faggioli said, “because the whole trip to the United States he very carefully didn’t want to give the impression that he was being politicized by any side.”

He added, “And this thing is the most politicized thing that you can imagine.”

Dr. Faggioli (stop laughing, it's not a new gay ravioli flavor, just kidding, yes it is) is a big professor at the University of St. Thomas at St. Paul, and the New York Times quoted him as one of the "Vatican observers" who knows stuff and things. Does he know stuff and things? MAYBE! Let's just assume that Archbishop Viganò is probably going to have to get on Craigslist and see if he can make money as a sexy cleaning lady VERY SOON, for fucking up the pope's trip by putting Kim Davis in his face.

Oh, but Even Steven, because the Vatican is firing a gay priest who had the utter audacity to say his gayness, and the night before a big special poping conference!

A Polish priest who served with the Vatican's doctrinal arm will no longer be able to carry out his duties after announcing he is gay on the eve of a major church meeting, a Vatican spokesman said.

With his partner at his side, Monsignor Krysztof Olaf Charamsa held a news conference Saturday in Rome, calling on Pope Francis to revise Catholic doctrine on homosexuality, which considers same-sex relationships sinful.

Charamsa, 43, said the timing of the announcement was intended to put the topic before the Synod of Bishops. The three-week assembly of bishops from around the world beginning Sunday will address issues facing Catholic families.

"My decision of 'coming out' is a very personal decision in the homophobic world of the Catholic Church. It has been very difficult and very hard. I ask that you keep in mind this reality that is difficult to understand for anyone who has not lived through an identical passage in their own life," Charamsa told reporters.

OOH, he is a gay who has a sexy love partner! Well, obviously he's fired, then, because on top of how priests aren't supposed to be boning ANYBODY (or getting boned), he's admitting to doing gay homosexual boning (or gay homosexual getting boned). Charamsa added, though, that this is all REAL dumb, because all the priests are gay and everybody knows it, like duh. No seriously, he did add that:

The priest said he wanted to challenge what he termed the Church's "paranoia" with regard to sexual minorities, claiming the Catholic clergy was largely made up of intensely homophobic homosexuals.

Ah, well, HMMMM! Because the Church is so anti-gay and some little Catholic schoolboys actually BELIEVE all that bullshit, so when they grow up to be gay, they think their only recourse is a life of celibacy, or "celibacy," as it were. So they have no healthy outlets for their sexuality, and they become extremely homophobic, due to how the Church has taught them to hate themselves. This is a great system you have going on here, Catholic Church!

Anyway, gay priest is fired. Kim Davis fan Viganò is not fired YET. But Old Gay Charamsa (that's what they call him in the Vatican schoolyard, where all the cardinals and bishops play hopscotch when they're not doing Church stuff) says all the priests are super-gay anyway, which means maybe Viganò is a homosexbian too. Maybe the two of them could look for new gay jobs together!