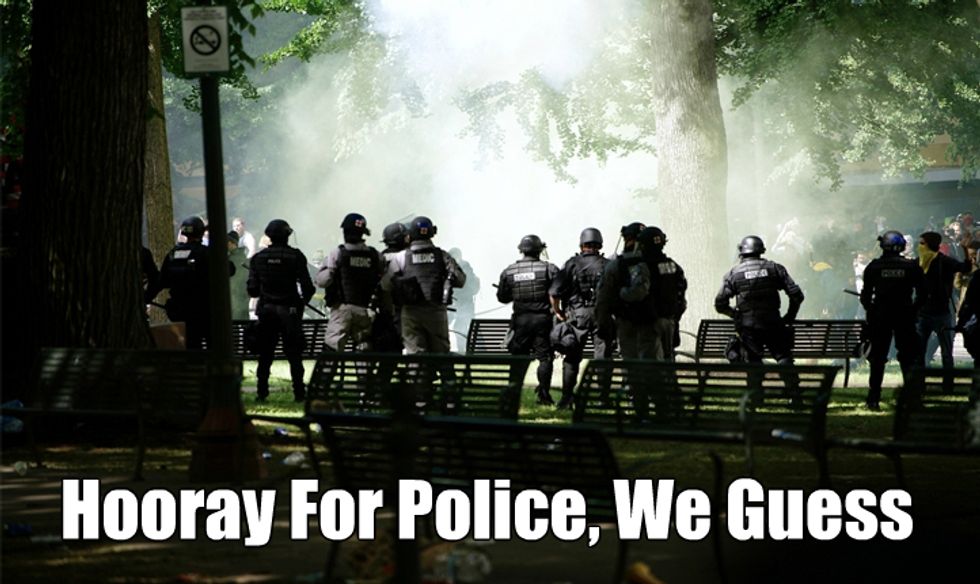 Racist assholes went ahead and held a "Trump Free Speech Rally" Sunday after Portland Mayor Ted Wheeler failed to shut it down, because the First Amendment really is the law. Outnumbered about ten to one by counter-demonstrators, the racist shithead rally went forward with minimal trouble, thanks to judicious policing and restraint by most of the counter-protesters. The "alt-right" Nazis pretended to give two shits about free speech -- as long as it's theirs -- and police managed to keep three distinct groups of counter-protesters -- labor organizers and union members, antifascists and anarchists wearing black and ready for a fight, and a bunch of plain old anti-racism demonstrators on the steps of City Hall -- away from the bigots.

Police wearing riot gear did clear antifascist and black bloc demonstrators from nearby Chapman and Lownsdale squares, using flash-bang grenades, tear gas, and pepper balls to disperse the antifa folks after "masked protesters threw bloody tampons into police ranks while chanting, 'All cops are bastards.'" Yeah, nice folks. Police arrested either 14 people (said the Oregonian) or 4 people (Willamette Week), and temporarily detained about 200 people by "kettling" them within a cordon of cops.

The Washington Postnoted that the location of the Nazi demonstration, Portland's Terry Schrunk Plaza, captured the tensions in the city. On one side was City Hall, where pro-diversity hippies and younguns said Portland was a nicer place without racism. In the middle were the schmucks with their pro-Trump and "Multiculturalism is Code for White Genocide" signs. Nearby was the jail holding white nationalist Jeremy Christian, who murdered two people and seriously injured another when they tried to protect two women Christian was screaming racist taunts at on a commuter train.

Christian had been photographed doing Hitler salutes at a previous rally held by the same "alt-right" group, Patriot Prayer, which is desperately trying to suggest it has nothing to do with hatred at all, oh no, definitely not:

Patriot Prayer’s Joey Gibson, who has said that his group tried to eject Christian from the April protest, brought a message of peace to Portland: “I want everybody here . . . to find it in yourself to make this day positive, with no hate and no violence,” he told the crowd. “We have to understand Portland is legitimately shaken up right now.”

He called on his supporters to “prove them wrong. . . . Hatred is a disease. We need to start spreading love to get rid of this hate.”

And indeed, on its Facebook page the day before the rally, Patriot Prayer announced it didn't want anyone there who was too publicly racist, because racism's bad, you know?

NAZI, KKK, IDENTITY europa, or ANY OTHER White Nationalists WILL NOT BE ALLOWED INTO THE EVENT TOMORROW.

On the other hand, a little bit of racism is fine as long as it's limited to a playful meme that only pretends to be sorta fascist, while winking:

One of the love-filled folks at the love-filled Patriot Pride rally, John Durano, who showed up wearing "a shiny body suit decorated with a cross made from American flag stickers," came all the way from Los Angeles so he could stand up for American Values, with love: "I do have white pride," he said. "What's wrong with that?" See? He loves white people!

Willamette Week noted that many of the "Free Speech" folks were -- you may be astonished to learn -- not actually from Portland, and were worried they might face counter-protesters as they went to their cars to drive back to wherever:

Supporters of the free speech rally dwindled to about 100 people after police declared the square closed. They faced off with about three times that many counterprotesters. Then the rally leadership emerged, flanked by about a dozen bikers they had hired to provide event security.

From there, the rally leaders wandered through the city, looking for the parking garage where they left their cars. Some were from Tacoma, others from the Bay Area or Vancouver, Washington. None knew where they were going and some seemed genuinely scared of the protesters who followed.

Small skirmishes broke out, with rally organizer Joey Gibson facing off in a yelling match with antifa at one point and an antifa member later provoking a fist fight with a rally attendee.

One of the featured speakers at the rally, Kyle Chapman, a multiple felon known to admirers as "Based stickman" because he hit a leftist demonstrator in Berkeley over the head with a stick, explained to Willamette Week that a week after a double murder was the perfect time to hold an "alt-right" rally:

"Why not hold this event? We need to talk about free speech," he told WW. "Why would we not hold this event? Because some left-wing mentally-ill person killed somebody? This is when people need to come out and communicate about our differences. Let's all come out and talk about it. That dude was a mentally ill Jill Stein supporter that vowed to assassinate Donald Trump and Hillary Clinton."

In mere reality, Jeremy Christian is an "Odinist" who's covered with tattoos of Nordic runes, and who boasted of his dreams of one day helping to bring back the Third Reich, which would technically be the fourth one, but nobody said these guys logic good:

"Brown shirts are rank and file," he wrote on Facebook on Jan. 23. "Nihilist Criminals like me facilitate and run the show if we are talking about recreating the third Reich. You need unhindered and unhinged thugs for dirty work. A Good thing we have the largest collection of them in the entire world!!!"

Nope, not exactly a lefty, we'd say. For his own part, Chapman had this message of love at the rally:

"I was just one person, you know, and I made a shield, and I took a stick, threw my gas mask on and my helmet, and I went in there and I cracked the skulls of some commies that were attacking us [whoops and applause] and now today we're all here together standing up for liberty and freedom!"

He's for cracking commie skulls in a loving way, is all. He's also very worried that Trump supporters are being oppressed, the poor dears.

And so the nice "alt-right" folks had their 2-hour hate, the antifa jerks didn't manage to tear up anything more than some free newspaper stands, and Portland survived. The whole wretched spectacle will return on June 10 when Joey Gibson and his Patriot Prayer crowd return to Portland (Gibson actually lives in Vancouver, Washington) for a "March Against Sharia," since Portland is apparently in imminent danger of implementing a radical Islamic caliphate.

Yr Wonkette looks OK in black, but never with a balaclava. We're also 100% reader-supported. Please click the "Donate" linky below!