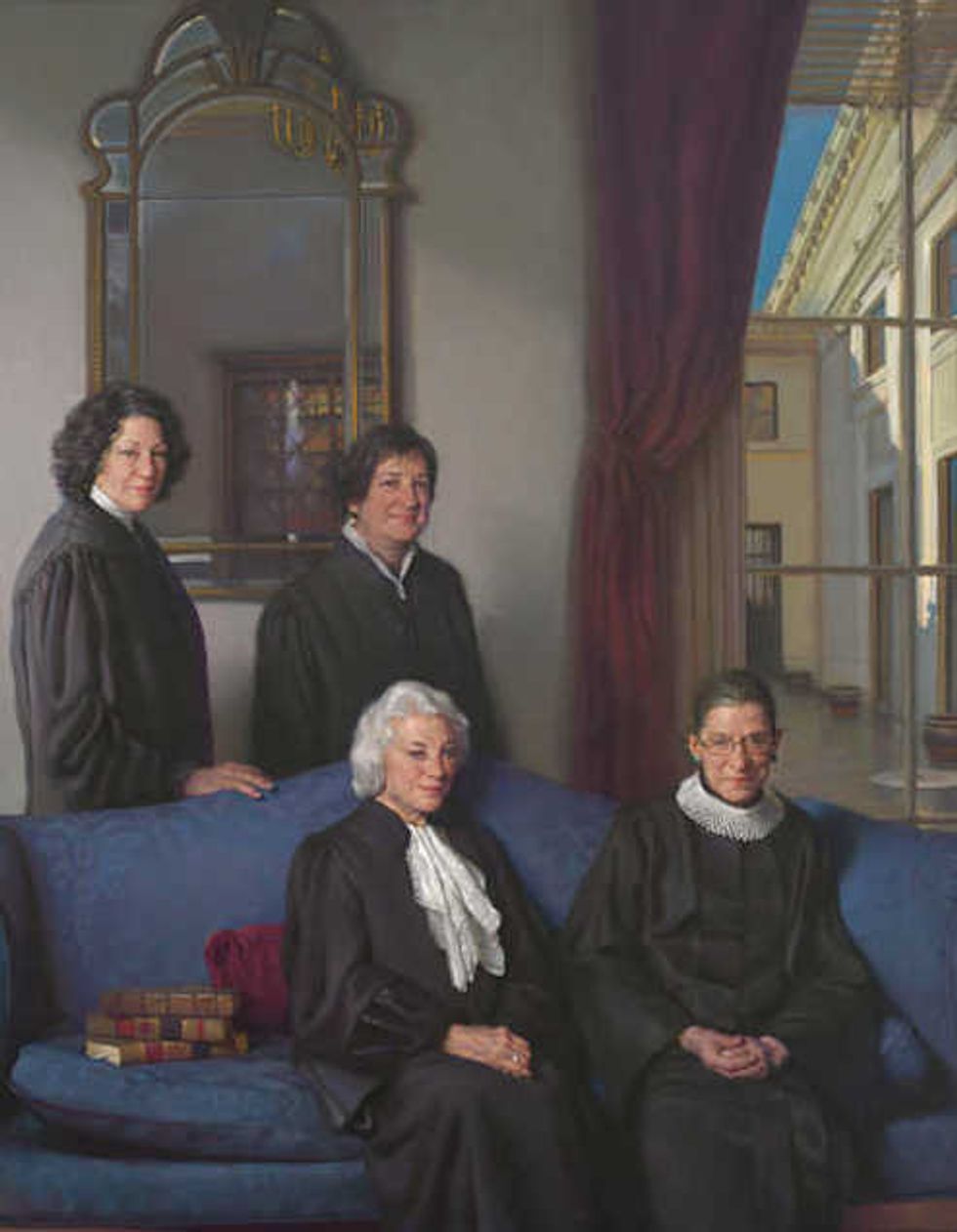 It is only the very first day of your long slog until the weekend and your inevitable decline and death, so that means it is high time for some nice time, yes? YES. And what could be nicer and more adorable than this handsome old-timey portrait of all the lady justices? Nothing, that's what.

The Supreme Court's four female justices are joined together in a new portrait unveiled today at the National Portrait Gallery in D.C. Famed portraitist Nelson Shanks, who painted the life-sized work, was on hand this morning as the press was given a first glimpse.

A seated Justice Sandra Day O'Connor and Justice Sonia Sotomayor, seen standing behind her, look somber, while Justice Ruth Bader Ginsburg, seated next to O'Connor, and Justice Elena Kagan, standing next to Sotomayor, have faint smiles. They are wearing their black robes, with differing neckwear that accurately reflects their preferences.

Thank god all the ladies were able to express their personal preferences via a large variety of lady neckwear. Diversity is important! But not even lying when we tell you that doily-dickey thing that Ruth Bader Ginsburg wears is the fucking best.

O'Connor's faint smile is positively Mona Lisa-esque, and we're digging it. She looks sly and grandma-sexy, and we really miss her, particularly when we remember that her replacement is the callow shallow shiny-faced Sam "Scalito" Alito, who is...what is the opposite of sexy? He's that. Yr Wonkette spent some time in our super seeekrit Wonket chatcave thingy ranking Supremes in order of bang-ability, and we were unanimous in our decision that if we have to rank them, we'd like to just leave Alito off the list, please.

Scalia would be on the list, because you know he is an all food foreplay freaky kind of guy, all big appetites and gusto. Ginsburg? Awww, yeah, Ginsburg. Especially if she's on waterskis. In a tutu. While we play Dick Cheney and she has to overturn Bush v. Gore, gnome sane?? Sotomayor's on the list because you just know she's a good time and a yeller. Kennedy can only get on the list if he wears a ball gag, because no one wants to listen to him pontificate during the sexytime. Roberts...gah. We can't deal with that level of repression; we haven't done it with the lights on since we were 17.

What were we talking about before we got all hot and bothered? Oh, yeah, portrait. Yes, yes, we know we did not cover all of the Supremes. Sue us.

Because every everything related to the Lady Supremes is nothing short of awesome, the painting is just going to stone cold hang out for three years to teach people that sisters are doing it for themselves:

Museum director Kim Sajet said the portrait, which is prominently placed on the second floor, will be a "launching pad" for an educational program emphasizing the difference that women are making in American life. "Things are beginning to happen" for women, she said, and the painting will hopefully "spark a conversation among young people, particularly young women, about breaking barriers."

Also, too, dude that painted the thing (1) got to hang out with the Supreme Ladies for four hours while he took their photos and and (2) got to spend 20 (!!!!!) hours with the Big Dog when he painted his official portrait. Best job? Best job. Except for that part where you have to have some modicum of artistic talent, we'd totally pack up and go do this gig, but until there's a market for stick figure Highest Court in the Land art or Supreme Court Letters to Penthouse we are out of luck.

[photo of painting by Mark Gulezian of the National Portrait Gallery]