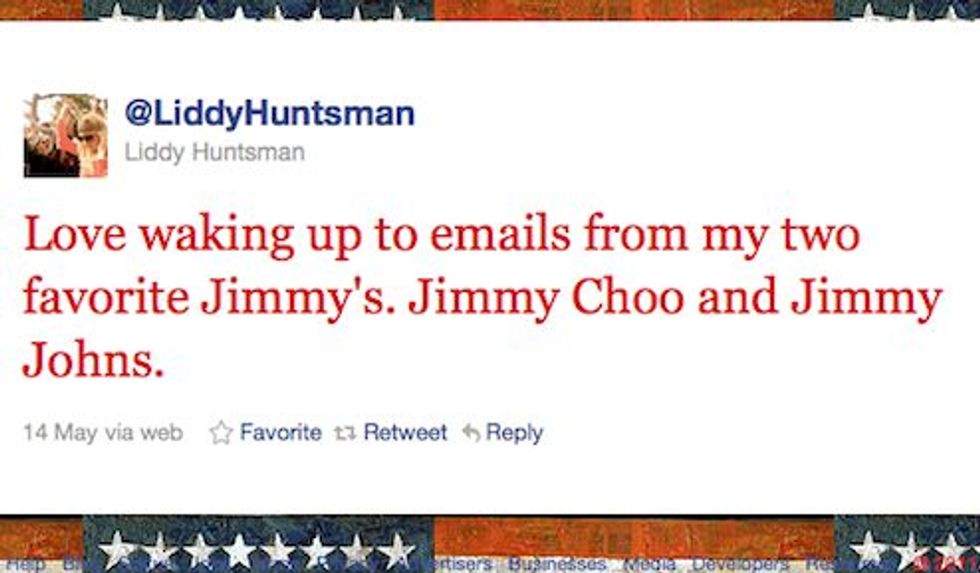 Because presidential campaigns are such sausage-fests and political wives are usually pill zombies with frozen smiles, the Washington media must always find some haughty, semi-glamorous and/or drunken daughter of a candidate to find reasons to write about. Whether it's the Bush Twins or Meghan McCain or that one grown-up daughter of John Kerry's who once appeared in public wearing a dress that looked sheer in a single flash photograph, you can always count on the campaign press corps to come up with a girl to fit this modern requirement. Who will it be this year?

A very anonymous newspaper man sends us this picture and suggests the 2012 haughty campaign daughter role will go to young Miss Liddy Huntsman, daughter of alleged GOP candidate Jon Huntsman. Liddy seems to have the Meg McCain thing going, circa 2007-08. Liddy has a Twitter too, allegedly, where she types messages about loving those pricey shoes that were so popular with the ladies on Sex and the City.

She's unemployed but travels the country a lot, doing fun things. She is also kind of funny! So, expect Liddy Huntsman to be trying out at Wonkette like all the other unemployed college grads on the East Coast. [Liddy Huntsman Twitter]