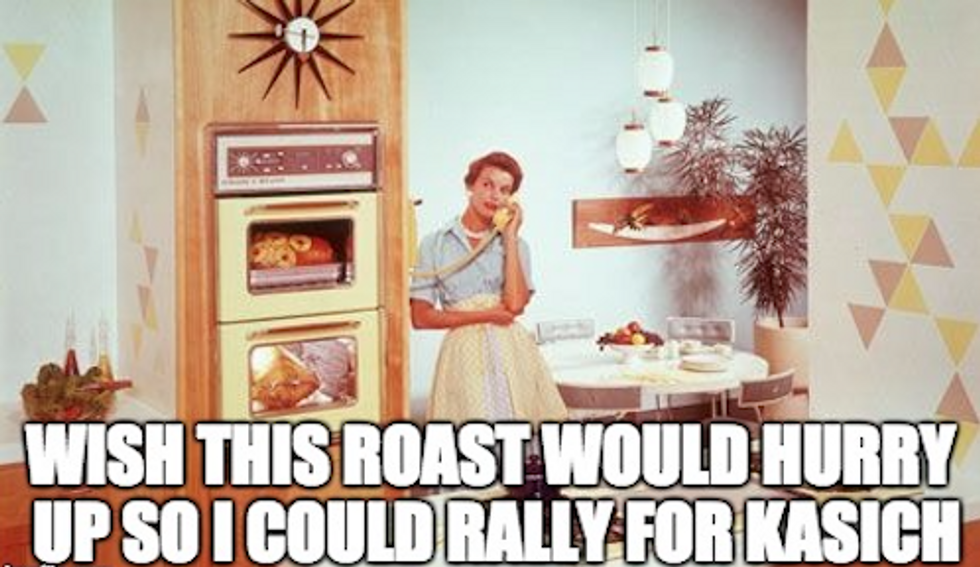 The very oh so moderate Ohio Gov. John Kasich loves the little ladies. He married one, and boy is his "hot wife" soooooo fine when she's at home doing his laundry. Also, he has daughters, and god willing, they'll grow up to be good little ladies too one day! The moderate governor's heart is so extremely big, he's got room for all the adorable little ladies in there. Especially the ones who've supported him throughout his distinguished moderate career, starting with his first election to the Ohio state Senate when he was 26:

How did i get elected? I didn't have anybody for me. We just an army of people who um -- and many women, who left their kitchens to go out and go door to door to put yard signs up for me.

Those were some good times, huh? Back in the roaring late '70s, when Kasich was the pot-dealer for Ronald Reagan's campaign staff (allegedly), and all the ladies stayed home where they belonged, making the menfolk sammiches, except for when they briefly ventured out to girl-fight for Kasich.

Maybe that's why Kasich just signed a new bill to defund Planned Parenthood in his state. It's his way of giving back to all the gals, like a friendly "thank you" slap on the ass. He loves you broads so much, he knows what's best for you, and funding for reproductive health ain't it. Besides, according to Gov. Kasich's fellow moderate Republicans in the Ohio legislature, you can get your lady business taken care of at your local food bank, and no babies have to die, so everyone wins.

[contextly_sidebar id="PCrnxWyrPUrs7BK6gDdeVY8Dpks7R8ZP"]Being the moderate he is, though, "pro-life" Kasich knows it's OK to murder your unborn baby if you got yourself raped or if you might otherwise die. That's why there's a special moderate exception in the bill he signed. True, under another bill Kasich previously signed, moderately, rape counselors are prohibited from telling victims abortion is available to them, so guess you girls just figure that one out on your own, somehow.

Man, it's a good thing that charming fellow Kasich is one of those moderate, reasonable Republicans who loves the ladies so so SO much. Just imagine if he were a typical anti-woman conservative extremist. Oh what a shit show Ohio would be in that case, huh?

UPDATE: Kasich campaign's team has responded to the scurrilous accusations that he said the words he said, about women and their kitchens:

Ah yes, the old "that totally gross casual sexism is not what you think it is, and why do you hate stay-at-home moms and grassroots campaigning?" defense. It's as classic as mom's apple pie. That she makes in her kitchen.