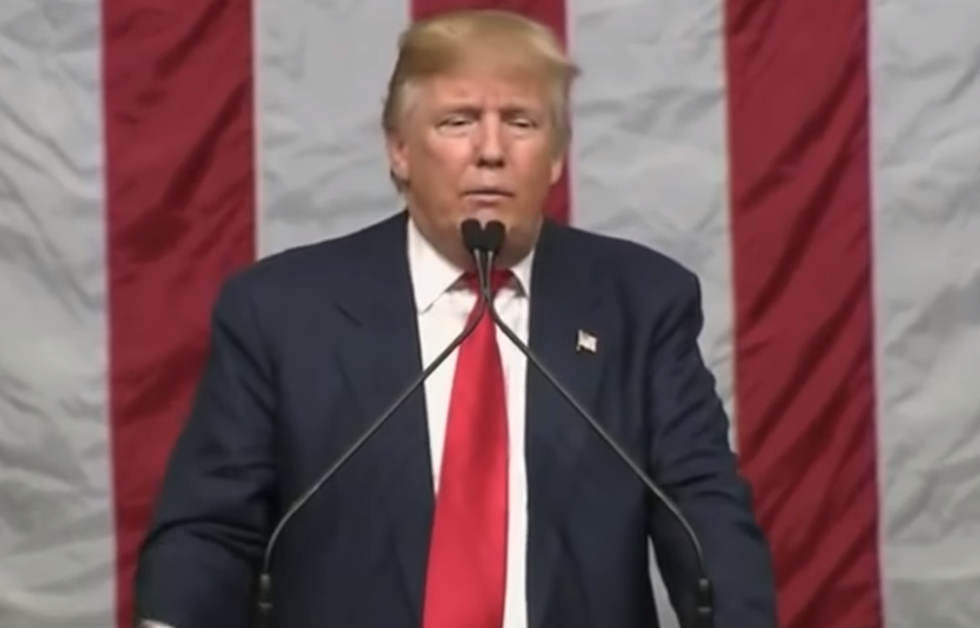 Donald Trump is being presidential again! As he explained, it's VERY IMPORTANT to wait and make sure you have ALL THE FACTS before you go off half-cocked making statements when tragic events happen. That's why it took him two days to say something substantive about what happened in Charlottesville, and then another day to share his REAL opinion, which is god bless Nazis for getting the proper permits. It's also why, as news broke of a terrorist attack in Barcelona on Thursday, Trump was like "SQUEEEEE BET A MUSLIN DID IT!" and waited at least nine seconds before jizzing all over Twitter. And then he waited 45 whole minutes after that to tell the mourning Spaniards some really good advice he learned in an email forward from his racist Uncle Dale:

Oh that sounds like a good idea! If there's a No More 'Slamic Terrors For 35 Years magic bullet, everybody should use it! Except UH OH, it's a Fake History News story about pigs' blood that Trump likes to tell his pig supporters. Trump has been telling this story for a while, of how General John Joseph Pershing, whose nickname/Twitter handle was "Black Jack," handled the Muslim ISIS Al Qaedas after the Philippine-American war. This was back around the turn of the 20th century.

Here, let Trump tell you this bullshit he heard from Uncle Dale. This happened at a rally in South Carolina in February of 2016:

Well, you dumb fuckstump, is it true? Nah? Oh hell, go with it, your followers are gullible rednecks who are tweaked out on bath salts anyway.

As the crowd cheered him on, Trump told them about Pershing — “rough guy, rough guy” — who was fighting terrorism in the early 1900s. Trump didn't say where this happened, but variations of this story online usually state that it happened in the Philippines during the Philippine-American War — part of the island nation's protracted battle for independence — early in Pershing’s career.

“They were having terrorism problems, just like we do,” Trump said. “And he caught 50 terrorists who did tremendous damage and killed many people. And he took the 50 terrorists, and he took 50 men and he dipped 50 bullets in pigs’ blood — you heard that, right? He took 50 bullets, and he dipped them in pigs’ blood. And he had his men load his rifles, and he lined up the 50 people, and they shot 49 of those people. And the 50th person, he said: You go back to your people, and you tell them what happened. And for 25 years, there wasn’t a problem. Okay? Twenty-five years, there wasn’t a problem.”

GET IT? The punchline is MUSLIMS AREN'T DOWN WITH PORK, therefore Pershing murdered most of these Muslim bad guys with pigs' blood. The one he allowed to survive immediately went home and started a thread on NextDoor Muslim and said, "Hey you guys, we gotta stop doing terrorism for 25 years because there is this guy General Pershing, and he is crazy. He will murder us all with pig blood if we don't cut it out." And terrorism was over for 25 years, according to Trump in 2016 in South Carolina! Or it was over for 35 years, according to Trump yesterday!

At one point in telling this story, Trump said: “By the way, this is something you can read in the history books — not a lot of history books because they don’t like teaching this.”

History books are biased against stories Uncle Dale made up during a particularly long toilet-gruntin' session one morning.

As Politifact notes, this story is not just a half-truth or an innocent fib, it is PANTS ON FIRE bullshit. Pershing wrote in his memoir that he knew a colonel who told him a story about burying Muslim insurgents with pigs, and a later edition of that memoir includes in a footnote a letter from Maj. Gen. J. Franklin Bell, discussing the concept. Unfortunately, none of the historians Politifact talked to were aware of Pershing shooting people with pig blood bullets. Oh well, "details."

Pollitifact also notes that on top of how the thing didn't fucking happen, the thing that didn't happen also didn't end Radical Islamic Terrorism (more accurately, the insurgency) for 25 or 35 or however many number of years Trump says that day. David Silbey of Cornell University, who literally wrote the book on this war, comments on how fucking stupid you are to even suggest that:

"Where Trump’s remark becomes ridiculous is in the idea that this actually worked," he said. "The Moro War did not end until 1913, and even that’s a bit of a soft date, with violence continuing for quite a while afterward. Defilement by pig’s blood isn’t -- and wasn’t -- some magical method of ending terrorism."

There is bullshit INSIDE Trump's bullshit, you just keep away peeling layers of bullshit and there's more bullshit, so much bullshit we're gonna get sick of bullshit.

But then again, that's what you get when you barely "elect" a maybe-senile right wing white supremacist who thinks Alex Jones and Sean Hannity report "the news."