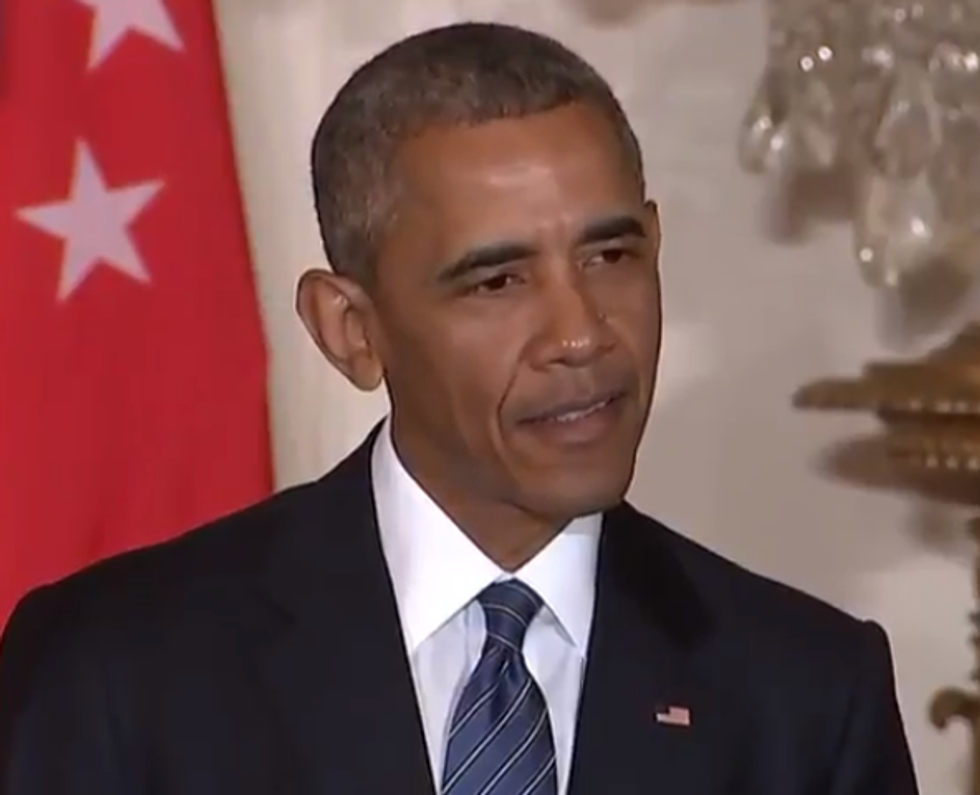 He might look sweet but he don't give no fucks

President Of America Bamz Hussein O'Barack is failing to give one measly fuck again. He took a break from playing Jenga with his BFF the prime minister of Singapore (true fact, that guy is in DC visiting Obama right now) to tell reporters what a pompous, unreconstructed dick Donald Trump is, in light of Trump's insane attacks on Khizr and Ghazala Khan, parents of American war hero Army Capt. Humayun Khan, who died in service to this country.

BREAKING: Obama says "I think the Republican nominee is unfit to serve as president" & is "woefully unprepared" pic.twitter.com/xL2pUGUenE

I think the Republican nominee is unfit to serve as president. I said so last week, and he keeps on proving it. The notion that he would attack a Gold Star family, that made such extraordinary sacrifices on behalf of our country; the fact that he doesn't appear to have basic knowledge around critical issues in Europe, in the Middle East, in Asia, means that he's woefully unprepared to do this job.

You know, nobody ever would have thought to say that about John McCain or Mitt Romney. Oh, they could be super wrong about things, but nobody said they were patently unqualified. What fun times we live in!

He continued, by trolling Republicans like John McCain and Mitch McConnell and Paul Ryan, who are all "oh my stars oh boy that Trump sure is saying some terrible things oh goodness well I never," but who don't have the balls to stop supporting Trump. Barry's got the balls. He also don't give no fucks:

And this is not just my opinion. I think what's been interesting is the repeated denunciations of his statements by leading Republicans, including the speaker of the House and the Senate majority leader and prominent Republicans like John McCain. And the question I think that they have to ask themselves is, if you are repeatedly having to say, in very strong terms, that what he has said is unacceptable, why are you still endorsing him? What does this say about your party that this is your standard-bearer?

This isn't a situation where you have an episodic gaffe; this is daily and weekly, where they are distancing themselves from statements he's making. There has to be a point at which you say, "This is not somebody I can support for president of the United States, even if he purports to be a member of my party."

Oh, the sweet smell of OUR PRESIDENT stringing Republicans up by their hoo-hoo-weeners, and proceeding to point and laugh. It's so ... America.

Will war hero John McCain actually step up like a real man and vote for Hillary? He surely well should! Or maybe Mitch McConnell could use that tough turtle shell of his for good for once in his goddamn life and actually show Donald Trump that his words and actions have consequences. Or maybe Paul Ryan could HAHAHAHAHA PAUL RYAN IS SUCH A PANSY he would never.

A couple of lesser Republicans have signaled that they'll probably be voting for Hillary -- Jeb Bush adviser Sally Bradshaw says she's not sure, but if her home state of Florida is close then #ShesWithHer, and New York Republican Congressman Richard Hanna is all in for Hillary, but he's not running for re-election, so meh.

But it's time for somebody REAL to step up. So come on, powerful Republicans with souls -- if you even exist, pffffft -- it's time to listen to your president and tell Trump to go fuck himself. Unless you're total pussies.