President Obama Got Diddled By A Fish, Y'all 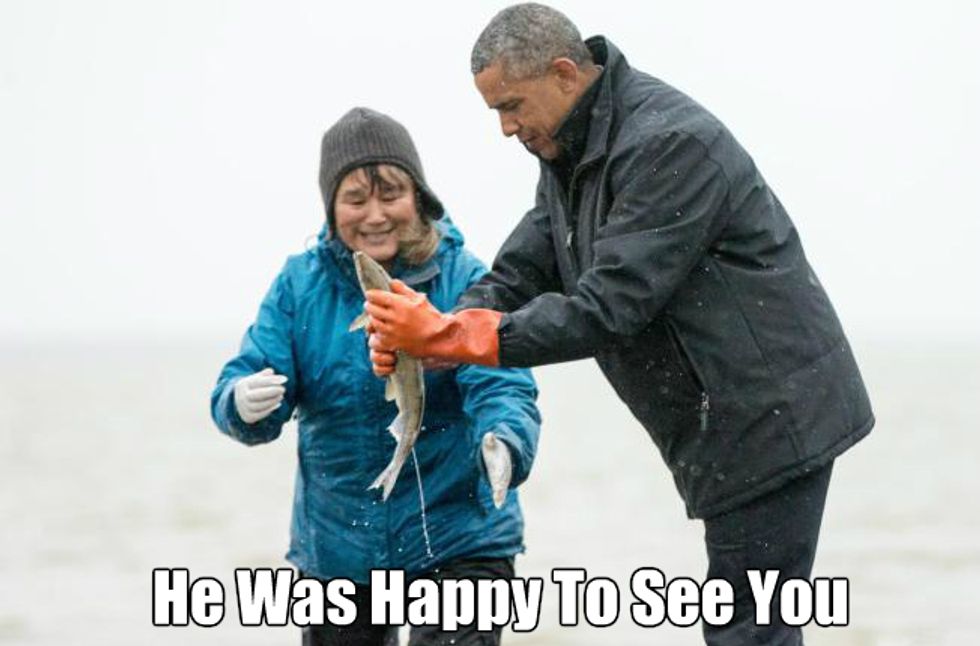 Barack Obama visited the Alaskan fishing village of Dillingham Wednesday, where he sampled some salmon jerky, talked to the residents about climate change, and met an amorous salmon which jizzed all over his mukluks. The fish's negligent discharge occurred while the president was getting a look at the villagers' traditional fishing methods; after holding up one fine specimen that he pronounced "a nice-looking fish right there," Obama was invited to grab a second fish, which had apparently been waiting for this moment since the 2008 primaries. With one mighty Piscean ejaculation, the salmon instantly supplanted the National Review's "little starbursts" for Sarah Palin as the most excessive declaration of love for a politician.

Needless to say, the incident was captured for eternity on video (NSFW: Fish sperms and dorsal fin nudity)

CBS News described the seminal moment of Obama's Alaska trip in the most delicate of language:

"Uh-oh, what's happening there?" He asked a woman standing nearby. She explained to him that the fish was spawning.

The president yelled over to the press, "Did you see that? Something got on my shoes. He was spawning a little bit, which -- generally you don't want fish spawning on your feet."

Then he relayed a message from one of the women who was showing him the fish nets.

"She said he was happy to see me," the president said.

Barry Bamz just has that effect sometimes, even on fish. The salmon's enthusiastic support was in marked contrast to the embarrassing scene at a Mississippi fish farm, where a catfish recently reacted to Jeb Bush by quietly closing its gills and expiring with a muddy, resigned burble.

Asked for comment, Donald Trump said that he was not impressed.

So a fish came on his shoes. Big deal. That's nothing. When I go into a deli, the Nova Lox can't stop ejaculating all over the place. When I'm on my yacht, bottlenose dolphins are always jumping up on the deck and begging me to masturbate them, which I always decline, but they can't seem to get enough of me. Magnificent fish or marine mammals, they say, and I feel bad for them, I really do, but it would be wrong. I can't even walk past the tuna aisle without a third of the cans bursting in sheer ecstasy. Don't talk to me about making fish orgasm. I will be the greatest fish ejaculating President God has ever created, and it will be beautiful.

Yr Wonkette would like to thank the people and wildlife of Alaska; we have been waiting all year to write the phrase "fish splooge on the President's shoes."