President Of The United States Donald Trump: What's A FISA? (We Aren't Joking) 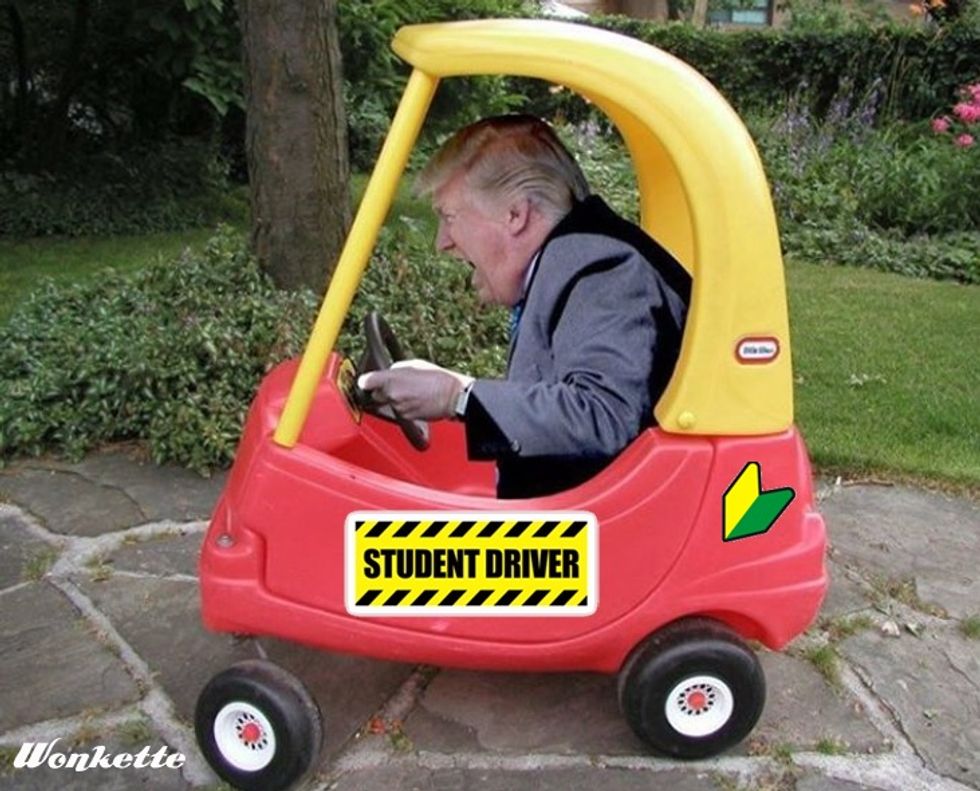 Can we put a missile launcher on this thing, can we, huh?

The New York Times has a nice piece today about the many ways in which our new president is learning how to do his job. Which unlike other presidents, is an especially daunting task since Donald Trump -- to put it charitably -- is an empty-headed numpty who knows less about American government than a relatively bright high school student with a "B" average. It also doesn't help that he's a walking poster boy for the Dunning-Kruger effect, came into the job convinced he knew everything he needed to, and is highly resistant to actually learning new things that contradict his worldview.

Slack-jawed ignorance and the nuclear codes: not a great combination.

And yet! The man may be somewhat educable! Not enough to become even a mediocre president, of course, but it's an interesting prospect to see which of his cherished alternate truths he may eventually have pried away from him. For instance, as we've noted already, he learned after talking to Chinese President Xi Jinping for just ten minutes that North Korea is actually a very difficult country to deal with. What's more, notes the Times, it only took a few meetings with actual business executives who do actual business in China to convince Trump he'd been wrong in approximately twelve billion campaign speeches, and China has not devalued its currency in quite a while. Oh, sure, the Atlantic's James Fallows Tweeted about that almost every time Trump spoke -- like, OVER A YEAR AGO:

But Fallows wasn't in the room with Trump, so there was no need to pay him or other elitist "experts" any mind.

Next week: Trump discovers ISIS may be hard to defeat, even with torture.

By the end of the week, Trump will be saying he always wanted a tougher policy toward Syria.

The Times lists a whole bunch of other examples, like Trump's realization that health care is complicated, that Vladimir Putin may not want to be his very best friend, that staying neutral on Syria isn't exactly easy, and even that NATO isn't obsolete. Of course, even when he learns a new thing, he's very reluctant to let go of old familiar stupidity: Sure, maybe NATO is OK now that he's president, but Trump still clings to his very mistaken belief that he's the guy who convinced NATO to finally care about terrorism.

There are lots of other fun examples of Donald Trump trying to learn how to president, even though learning is hard and boring and the ADHD Patient In Chief would much rather be golfing (where he does deals all the time, for America, you bet). But in a fine example of burying the lede, the Times might have given somewhat more prominence to this little detail?

So much of this is new to Mr. Trump that only after he publicly accused Mr. Obama of having wiretapped his telephones last year did he ask aides how the system of obtaining eavesdropping warrants from a special foreign intelligence court worked.

Let's go over that one more time: The guy who knows national security so much he doesn't need security briefings, who doesn't actually trust the intelligence agencies, and who knows more about ISIS than the generals, had somehow managed to be president of the United States for almost two months before he bothered asking anyone about the FISA courts and how they work. Someone probably mentioned FISA during a briefing or two before he took office, but he didn't bother actually learning much about it until after he'd accused Barack Obama of doing something presidents aren't even allowed to do. The people who've read a couple New Yorker articles by Jane Mayer had a more complete understanding of a fairly basic aspect of intelligence-gathering in the post-911 security environment. Hell, Yr Wonkette was writing about FISA issues way back in 2013!

Maybe Mr. Trump needs to engage the services of Charles Baker Harris, aka "Dill," from To Kill a Mockingbird. He can read. He can read anything you got. Good man to have around.

We don't even know why we find this surprising. Hell, a significant portion of the country could legitimately wear T-shirts saying "I know more than the president of the United States. Ask me!" (Hey, and we could be selling them!) But you'd think that at some point even during his very lazy prep for presidenting, Donald Trump might have picked up a thing or two about FISA and FISA warrants, maybe?

Then again, it took his team a while to find the White House light switches, so maybe there were other, more pressing priorities.

Yr Wonkette is ad-free, and depends on donations from readers to keep us going. That and coffee. And scotch. Please click the clicky below the article and donate!