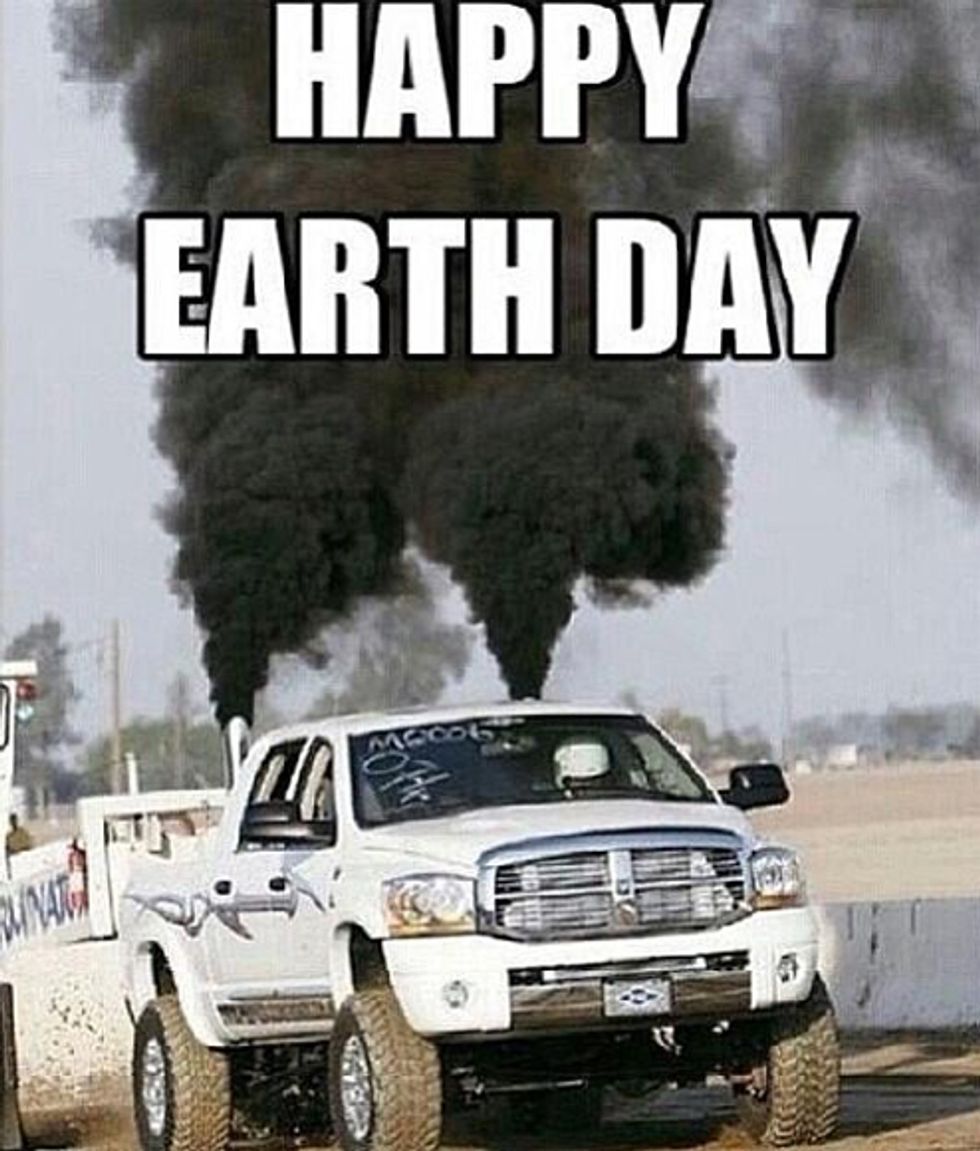 We told you a while back about the phenomenon of"rollin' coal," whereby Manly Men modify the fuel systems of their big diesel trucks to deliberately dump excess fuel into their engines, creating thick black smoke and proclaiming their freedom from clean air and other despicable liberal plots. It's especially hilarious when they blow smoke on a Prius driver or a bicyclist, ideally one with asthma. You get the sense that if they could find an emphysema patient on oxygen to roll coal on, they might just ejaculate in their pants. It's technological assholery as political statement, the closest these motorheads can get to actually taking a shit on the environmentalists (and the "environment," which isn't even a real thing) they hate so much. Oh, and incidentally, the Environmental Protection Agency clarified Monday that rollin' coal is unquestionably illegal. But what would you expect from a bunch of wimpy poindexters who think the environment needs protecting?

The nice folks at Talking Points Memo asked the actual press secretary for the EPA, Liz Purchia, to comment on the trend of rollin' coal. At some point after her eyes finally stopped their own rolling, Purchia said, "the short answer is this is illegal." And then, just like a terrible freedom-hating bureaucrat, she directed them to the EPA's website:

It is a violation of the [Clean Air Act] to manufacture, sell, or install a part for a motor vehicle that bypasses, defeats, or renders inoperative any emission control device. For example, computer software that alters diesel fuel injection timing is a defeat device. Defeat devices, which are often sold to enhance engine performance, work by disabling a vehicle's emission controls, causing air pollution. As a result of EPA enforcement, some of the largest manufacturers of defeat devices have agreed to pay penalties and stop the sale of defeat devices.

Ah, but what about the freedom of the individual to say Fuck You to Big Government? Surely that outweighs what some snotty little EPA bureaucrats came up with because they have no sense of humor, right? Hey, EPA press secretary Liz Purchia, DO YOU EVEN LIFT?

The CAA prohibits anyone from tampering with an emission control device on a motor vehicle by removing it or making it inoperable prior to or after the sale or delivery to the buyer. A vehicle's emission control system is designed to limit emissions of harmful pollutants from vehicles or engines. EPA works with manufacturers to ensure that they design their components with tamper-proofing, addresses trade groups to educate mechanics about the importance of maintaining the emission control systems, and prosecutes cases where significant or imminent harm is occurring.

OK, but all that gobbledygook is about disabling anti-pollution devices. Doesn't look to us like it says anything about adding in a device to create additional pollution, now does it? Stupid Washington bureaucrats!

On a related note, we see that PickupTrucks.com posted an editorial calling on truck owners to stop this coal-rolling nonsense, because it "gives other media outlets another opportunity to paint a stereotypical picture of pickup truck owners and enthusiasts." Not surprisingly, the coal-rollers quickly took to the comments and declared anyone opposed to the practice a liberal idiot, and of course suggested that the author of the article was some kind of traitor to the pickup-truck-loving community.

Yr Wonkette predicts that it's only a matter of days before some member of Congress introduces the "Rollin' Coal Protection Act of 2014," which will create a religious exemption to EPA regs for worshipers at the altar of Holy Smoke.