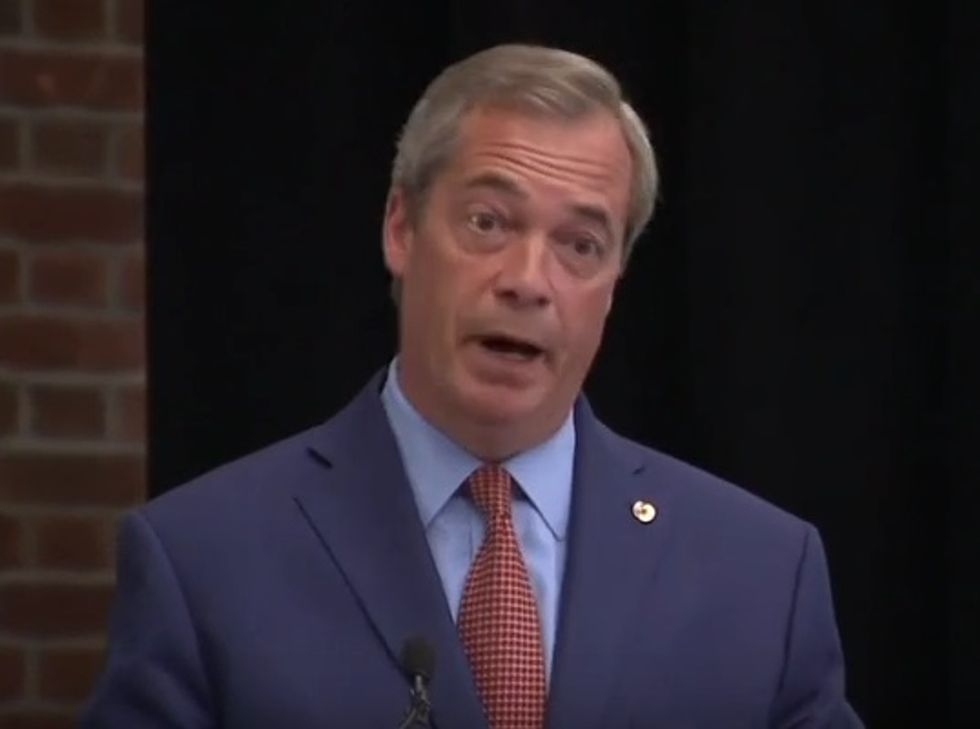 Nigel Farage, who led the rightwing UK Independence Party in its campaign for Brexit, has resigned as party leader, because why do you even need a UKIP when the UK has ipped right out of the EU? The Guardian notes it's the third time Farage has sacked himself, leaving the credits to be completed in an entirely different style at great expense and at the last minute. The Ukip is now expected to be led by "Ralph" The Wonder Llama.

Farage announced the move in classic style Monday, explaining that he'd only taken the job because he loved his country so much, too much, maybe (although not as much as Newt Gingrich loves his), and now that he'd won everything he wanted, he's blowing this popsicle stand:

I am not and I have never been, a career politician. My aim in being in politics was to get Britain out of the European Union. That is what we voted for… I now feel that I’ve done my bit; that we couldn’t possibly achieve more than we’ve done in that referendum.

It has come as a cost to me and perhaps to those around me. During the referendum I said I wanted my country back. What I’m saying today is, I want my life back.

Well that's a noble sentiment for anyone, regardless of whether they've just tanked the world economy or merely had one of their oil rigs blow up and foul the Gulf of Mexico with a few million barrels of oil. It gets right to that public-spirited dedication to seeing things through that we've come to expect from great leaders like half-term governor Sarah Palin.

BP Apologizes For Ruining Your Three-Day Weekend (and the Earth)

Farage's is only the latest in a string of exits among both winners and losers of the Brexit campaign: Prime Minister David Cameron resigned the morning after the vote, although he's delaying his Prexit until September; Boris Johnson, the former London Mayor who helped lead the Brexit movement, announced last week he would not run for Prime Minister, preferring instead to seek a career as Donald Trump's stunt double; and Labour leader Jeremy Corbyn is also facing a no-confidence motion by members of his party. It would appear there are nonetheless British politicians available to take their places.

Farage had created a spot of bother when, immediately following the successful Brexit vote, he admitted that one of the campaign's chief talking points was in fact a complete fantasy: "Leave" campaigners had claimed that the UK spent £350 million a week on payments to the EU, which could instead be spent on improving the National Health Service. After winning, Farage told "Good Morning Britain" host Susanna Reid it was really just a load of dogs' bollocks, albeit a really popular load of dogs' bollocks:

Farage: No I can’t. And I would never have made that claim. And that was one of the mistakes I think the Leave campaign made.

Reid: Wait a moment. That was one of your adverts.

Farage: Well it wasn’t one of my adverts.

Farage explained it was simply "one of the mistakes made by the Leave campaign,” and not really his fault, now was it, although during the campaign he somehow never mentioned it. It might not have come up. Also, he couldn't guarantee that every child in the UK would get a pony, either.

What with truth being an absolute defense against claims of libel, we think maybe she didn't really need to take the remarks back. In any case, now that he's done his very own Ukipxit, we wish the best for Mr. Farage in his future plans, particularly if they involve walking barefoot and blindfolded across a hardwood floor scattered with Lego blocks. Those little one-stud fuckers. We only want what's best for him.