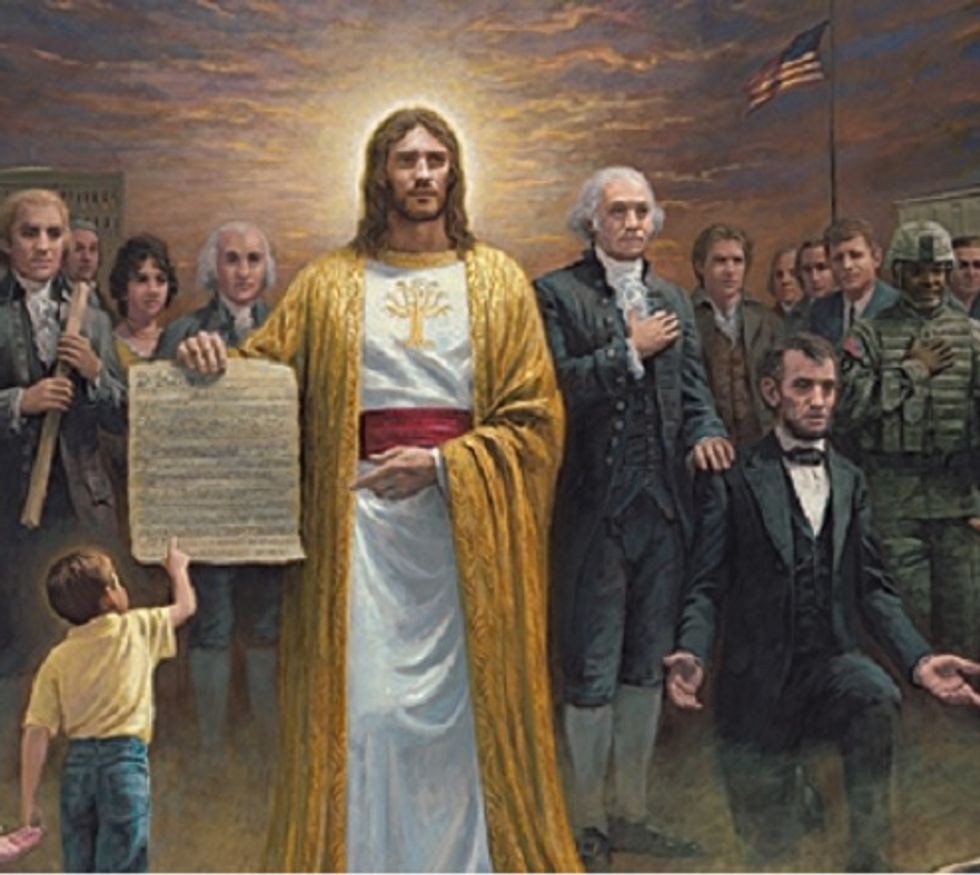 When a convicted "pro-life" terrorist who shot an abortion doctor to death, in his own church -- for the unborned babies, and for Jesus! -- threatens to do it again, you should probably take him seriously. Scott Roeder, who murdered Dr. George Tiller in 2009, has been rotting behind bars where he belongs ever since he was convicted of murder. Roeder has no remorse for his crime; in fact, he's been fantasizing about his next victim: Julie Burkhart, the executive director of the clinic that replaced Dr. Tiller's after Roeder murdered him.

Burkhart has been the "pro-life" terrorists' number one target since they accomplished their mission of putting Dr. Tiller out of business by any means necessary. She's been harassed with charming signs like "Where is your Church?" because ha ha hardy har har, they will gun her down in her church too. For life!

And the Army of God, a "pro-life" terrorist organization that quite overtly says it is good and right and definitely what Jesus would do to murder abortion providers, has not only put her at the top of its wanted list, but its leader, David Leach, went to have a little chat with Roeder, the "pro-life" hero, in prison, in which they nudge nudged and wink winked about how it sure would be a sarcastic-voice "shame" if someone were to murder Burkhart, but it would be her own fault, you see, because that's what someone who provides a legal medical service deserves, as Roeder the Doctor Killer explained:

It is a little bit death-defying for someone to walk back in there. For Julie “Darkheart” to walk back in there and reopen a murder mill where a man was stopped. It’s almost like putting a target on your back, saying, “Well, let’s see if you can shoot ME! I have to go back to what Pastor Mike Bray said: If 100 abortionists were shot, they [surviving abortionists] would probably go out of business. I think eight have been shot, so we’ve got 92 to go. Maybe she’ll be number nine. I don’t know, but she’s kind of painting a target on her.

The Kansas Department of Corrections disciplined him -- apparently, they have some kind of weird hang-up about convicted killers who threaten to kill again -- but Roeder is doing what any reasonable patriotic American would do. He's suing the department for violating his First Amendment rights.

Roeder is represented by Topeka attorney Billy Rork, who said he thinks the department violated Roeder’s right to freedom of speech.

Rork said Friday he is working free of charge to represent Roeder, an acquaintance since they were teenagers, who wrote him a letter asking for his help. Rork said he took the case mainly because “I’m a big First Amendment guy.”

He seems nice, doesn't he? Just a simple country lawyer who believes so strongly in the First Amendment that he will happily represent a convicted murderer -- for free! -- just to protect his right to plan some more murders.

Remember this charming fellow, Mark S. Gietzen, chairman of the Kansas Coalition for Life, also a "pro-life" activist in also Wichita, Kansas, a longtime hotbed of terrorist activism against abortion providers? He and his fellow gun-toting thugs were petitioning the city to have another abortion clinic shut down on the grounds that abortion clinics attract scumbags like him, who, gosh, sometimes might have to resort to violence against people who work at the clinic.

“Even a well-meaning dog will bite at some point in time if you keep antagonizing it,” Gietzen said.

Asked what he meant by that, Gietzen said, ”We have this concealed carry thing where half the people in Kansas are walking around with firearms.”

“The way this guy acts, I’m afraid that someone’s going to shoot him,” Gietzen continued, referring to the escort. “He’s asking for it. I don’t want for that to happen…It’s not good for the cause.”

Gietzen refused to say whether he or his fellow protesters are armed. “That’s not a polite question to ask an individual,” Gietzen said. “That’s why it’s concealed.”

Given the thousands of incidents of "pro-life" terrorism, which includes a long list of casualties, one would think the need to prevent a convicted murderer from planning any more murders might slightly outweigh his free speech rights to casually chat about whom to murder next. One would think.

Unless Roeder is claiming that he's simply exercising his sincerely held religious beliefs under the First Amendment. We know he sincerely believes abortion providers should be killed because hey, if the government will not give in to the terrorists' demands to criminalize abortion, they'll take matters into their own hands. That's why Roeder worked closely with another convicted "pro-life" terrorist, Cheryl Sullenger, now senior policy adviser at Operation Rescue, and has demonstrated that he is willing and able to kill anyone whom he considers a threat to the sanctity of unborn life. Because that is what "pro-life" terrorists believe.

But maybe being a "pro-life" terrorist constitutes a sincerely held religious belief now. Who knows? The Supreme Court said you do not have to obey the law if you sincerely believe you shouldn't have to, and every "religious" wackjob in America is currently testing that theory to see just how far it goes. So maybe Roeder's lawsuit will be thrown out, as it should be. Or maybe some sympathetic judge will agree that Roeder has a right to work with other terrorists to plot the murder of more abortion providers because hey, that's just how the First Amendment works now.