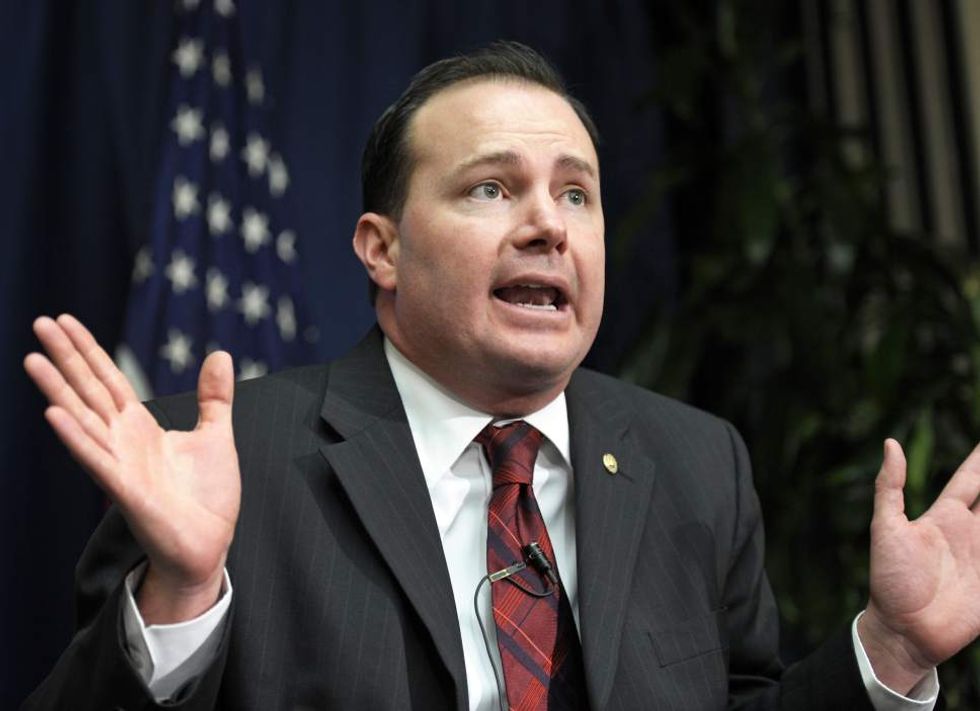 Every once in a while, there is a thing that one would assume that all Americans, regardless of political affiliation, would support. Or at least I would, because despite the fact that my job for the past several years has involved writing about the absolute worst humanity has to offer, I still find it hard to believe that people are as straight-up evil as they often are.

But here we are, today, with Utah Senator Mike Lee, who is fighting tooth and nail to prevent any federal funding from going to help the city of Flint, Michigan, replace the old lead pipes that are causing their water to be contaminated. Back in September, Lee was one of only three Senators to oppose a $10 billion water bill that included $100 million in aid to Flint -- specifically because of that part of the bill. In March, he blocked another $220 million emergency aid package to Flint. He currently supports a Republican stopgap budget that includes aid to flood victims in four states, but not the aid to Flint.

This is a major point of contention in Lee's race against Democratic opponent Misty Snow, in the fight to hold onto his Senate seat. Which he's currently winning, because it is taking place in Utah. Snow supports federal money going to help Flint, because she thinks that people should have access to water that is not contaminated.

"I do not want children drinking poisoned water, and the government should do everything in its power to prevent that from happening," Snow told the Salt Lake Tribune. "It's unacceptable that Mike Lee has used his position as a senator to do everything in his power to block and delay federal funding that would have protected our citizens from contaminated water."

However, Sen. Lee, who considers himself to be very pro-life, thinks that the Flint situation is just a problem with a local utility and not any of the government's business. And, apparently, that if the government assists Flint during this emergency, then other cities will start faking water emergencies in order to get that sweet, sweet, government cash.

Local utility/state governor and state department of Environmental "Quality" ordering that Flint switch its water supply to the polluted local river without any anticorrosive treatments for its old lead pipes, potato/potato, you know?

So basically what he is saying is that it's better for the people of Flint, Michigan, to get sick from contaminated water, or to have to spend ridiculous amounts of money on bottled water in order not to get sick from all the lead in the water, than to risk "water crisis" becoming a hot new trend for communities needing money? Like it's going to be some kind of "pet rock" type fad or something?

I mean, you would just think that someone who loved unborn babies as much as Mike Lee loves unborn babies, would have just the tiniest amount of sympathy for those babies who have now exited the womb, and would prefer that they not die from drinking contaminated water or drinking formula with contaminated water in it. Right? Hahahaha. No. Legal abortion is "savagery" and promotes a "culture of death" but once those babies are born, they are none of Mike Lee's concern and can go fuck themselves. Or drink lead!

Lee, by the way, is on Donald Trump's shortlist for Supreme Court nominees.