Professor Elizabeth Warren Grades Betsy DeVos's First Year, Is All Out Of Fs To Give 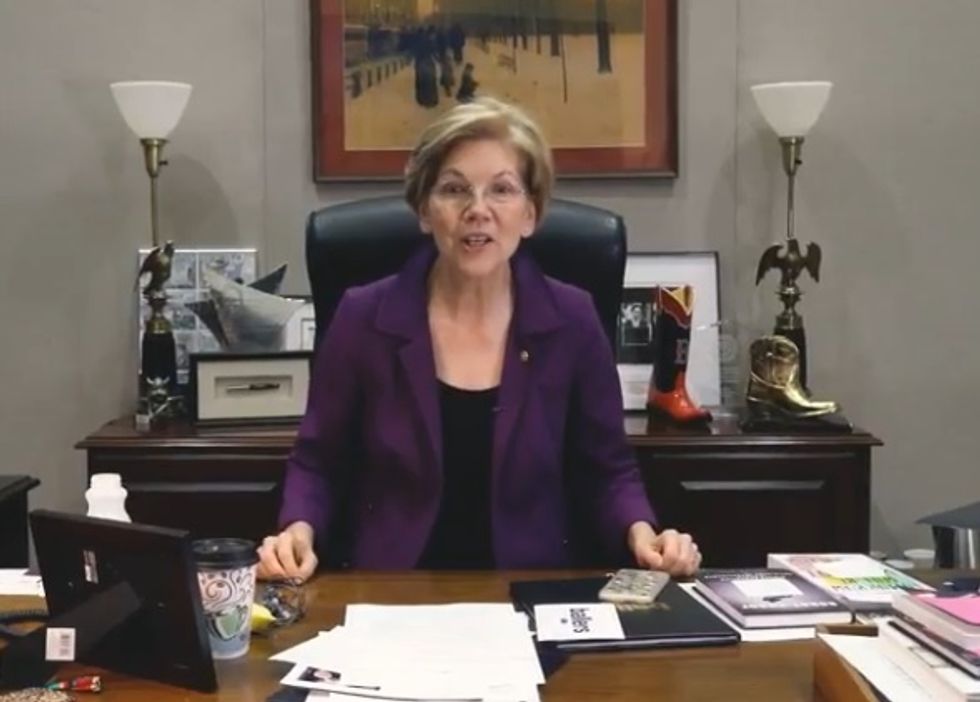 Oh, Betsy. You need to take remedial EVERYTHING.

Senator Elizabeth Warren does pretty good Twitter. No way we were going to pass up clicking on this link:

Sen. Warren and Rep. Katherine Clark, both of Massachusetts, released a 17-page report titled "DeVos Watch, Year One," cataloging the many follies and failures of the Education secretary's first year, with four major sections:

It's not a very encouraging report card, and from the very first paragraph, the report calls attention to just what an extraordinarily bad choice Betsy DeVos is to be in charge of American education policy:

Nobody's going to accuse this report of being dry and bureaucratic, but unlike the work of certain EPA press spokespeople named Liz Bowman, Warren and Clark back up the tough talk with details, carefully footnoted and supported by evidence. Yes, of course it's got an agenda, but it makes a persuasive case. Which, really, isn't all that difficult when you're writing about someone whose confirmation hearings so clearly demonstrated she had very little familiarity with federal education policy apart from a sincere desire to dismantle it (the report's section on DeVos's confirmation alone leaves us whomperjawed that anyone so devoid of experience could be confirmed).

The meat of the report details the cheerfully lax attitude DeVos brings to conflicts of interest, like this charming excerpt from a New Yorker profile on DeVos:

One might quibble, perhaps, that the report elides what DeVos said is the "return on investment" she sought ("We expect to foster a conservative governing philosophy consisting of limited government and respect for traditional American virtues") because she was talking about policy priorities, not remuneration, but those policy priorities are radical in themselves.

The report is on more solid ground when detailing the staff DeVos has brought to the Education Department: Three of DeVos's top staffers come straight out of the for-profit college industry; two of them were executives with colleges that were sued for scamming their students. Gee, bet they'll do a terrific job of setting education policy.

The report also presents a thorough review of the many actions DeVos has taken to help out for-profit colleges: loosening regulations, reducing accountability, making it harder for students who've been defrauded to get paid back or to have their loans forgiven, and weakening the department's oversight ties with the Consumer Financial Protection Bureau (which of course is also being dismantled by the Trump administration).

In the section on how DeVos is undermining public education, Warren and Clark offer a damning little detail on how DeVos's schedule reflects her priorities. After a FOIA request -- of course, the department had to be sued to get the secretary's schedule -- an analysis found

[Many] of Secretary DeVos’s meetings were connected to the alternative education options (charter schools, religious schools, private schools) that she promoted prior to taking office.

And while public schools far outnumber alternative schools like private schools and charters, About half of DeVos's site visits to schools have been to charter, religious, and private schools, "despite traditional public schools educating nearly 90 percent of children in America." You know, for now, at least. Yeesh.

Betsy DeVos Simply Does Not Care To Reply To Your Inquiries, Stupid Peasant Senators!

Is the problem with education all the lying sluts, or is it transgender kids? Just kidding! It's both!

As Yr Wonkette has noted, DeVos's record on civil rights in education has been just terrible, reflecting a cluelessness that we all got a little glimpse of when she praised historically black colleges and universities for doing such a nice job of providing school choice for blacks. When they were barred from attending any other colleges, incidentally, but really it was about the private sector fixing a market problem.

Warren and Clark detail DeVos's refusal to take campus rape seriously, rolling back Obama-era rules on dealing with campus sexual violence. And of course her decision to toss out protections for transgender students -- another legacy from the Obama administration. It's almost as if there's a theme here. The Education Department has also cut back on enforcement and investigation of claims of systemic discrimination, starting in 2017 and continuing just this week.

In statements to the media, Clark gave DeVos a grade of "F" for "failing to protect our promise to America's students," and Warren repeated her insistence that DeVos is simply the worst Education secretary ever:

"Secretary DeVos has spent her first year bending over backwards to allow students to be cheated, taking an axe to public education and undermining the civil rights of students across the country," she added. "Secretary DeVos has failed in her job and she must be held accountable."

The Department of Education has not yet issued a response to the report, but when it does, expect it to be misspelled.

Yr Wonkette is supported by reader donations. Please send us money, and we'll learn you kids a thing or two.