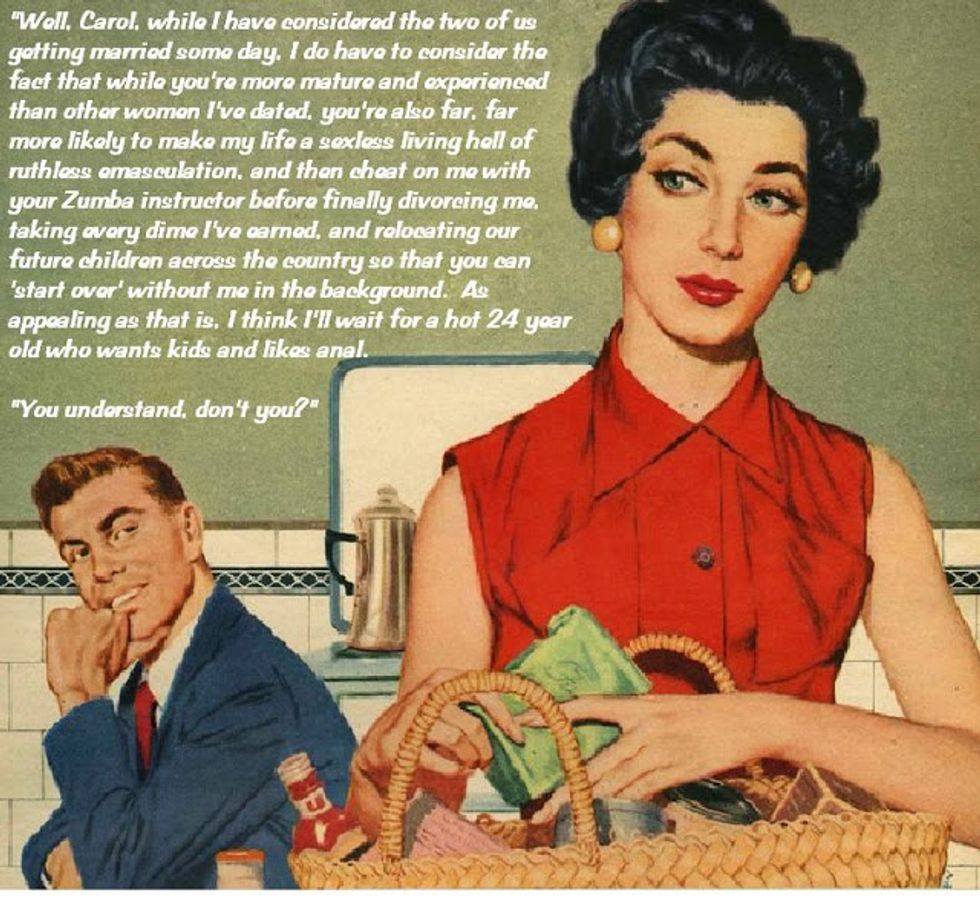 Here is something that the Internet went and puked up on our digital doorstep a few days back: a collection of Microsoft Office-based editorial artwork designed to provide inspiration and motivation to "The Manosphere." And what is the "Manosphere?" We'll let the anti-MRA blog Manboobz do the 'splainin:

The Manosphere: The loose collection of blogs, message boards, and other sites run by and/or read by MRAs ["Men's Rights Advocates"], MGTOW ["Men Going Their Own Way: a lot like lesbian separatism, but for straight dudes.", and assorted friendly Pick-up Artists. [Link added by your Doktor Zoom]

To better understand this point of view, it might be useful to look at a couple of additional motivational images from a gentleman who, elsewhere on his site, has a collection of "Pearls of Wisdom" such as this:

Women have Girlfriends and Boyfriends. If you’re not fucking her, you’re her Girlfriend. -- Rational Male

Isn't that witty! This particular blogger, "Ian Ironwood" (really!!), has an impassioned story about how he was irreversably damaged and bullied by the anti-man propaganda of Marlo Thomas's Free To Be...You and Me:

I take issue with the program because it was loaded with anti-masculine imagery and took the approach that, basically, all things patriarchal were evil and oppressive, and all things feminist were inherently good. It told me, in other words, that I was Free To Be pretty much anything in the world I wanted . . . except a masculine Man.

So William didn’t want a doll?! It seems only reasonable that, in order create a modicum of space for Freedom of Manliness, he would offer a rejoinder that says, hey, wait a minute, Marlo, what about boys, huh?

He acknowledges that there is a slight flaw with this poster: "Probably a little long-winded." On the other hand, compared to his blog posts, it's a model of concision. And, given his childhood trauma of having had Free To Be... inflicted upon him, entirely understandable:

Free To Be You And Mefucked me up. Bad. It taught me that it WAS NOT OKAY to be a "boy", that MEN were universally overbearing and insensitive jerks whose only role was to dictate and oppress, and that my ONLY HOPE for moral and social acceptance in this brave new plastic world was to hand my testicles over to Marlo and forget I ever had them.

We don't actually remember that part, but it's been a while. He probably means this dumb cartoon, in which a princess rejects her father's plan to marry her off. It also has some pretty cheesy voiceover work by Alan Alda, which could well be the real source of Mr. Ironwood's trouble. In any case, you can certainly sympathize with his reaction to seeing a HuffPo piece by that very same Marlo Thomas (!!!!) about bullying:

Thanks to FTBYAM and its clones, adherents, and attitudes, I and thousands of boys like me were institutionally bullied by feminists throughout our childhoods. Our schools and our teachers were working with the intention of removing the dangerous "masculine" characteristics that might interfere in the feminist paradigm -- say, like getting married and wanting your wife to stay at home with the kids, or pursuing a "typical" and "traditional" male career path that might block some enterprising young woman from having that job. FTBYAM epitomized feminism's subtextual message to men: YOU ARE USELESS AND EVIL AND IN OUR WAY.

See what comes of Rosie Grier telling impressionable children that it's OK to cry? And so, of course, it's only natural that a man would put together some messages to counter the notion that men are evil fuckwits:

Sort of like those ironic greeting cards which juxtapose old 50's graphics and amusing modern captions, isn't it? Except this juxtaposes old 50's graphics with 15th-Century sentiments, so that is pretty different! And don't you dare accuse him, as one commenter did, of sharing the values of the GOP, because he does not! He angrily replied, "I'm a Progressive, moron. I'm a firm believer in Humanism. Feminism, not so much." So you see, apart from the screaming hatred of half of humanity, he is just like many of us here! (Don't believe us? Just slog through his explanation of the 2012 presidential vote! Like lookin' in a mirror, we tell ya.)

It is hard to say what kind of influence these MRA idiots actually have; they certainly exist noisily on the interwebs, and obviously one of them recently bought a newspaper in Niagara Falls New York. It has even been rumored that there are MRA Bronies out there, which seems like it would involve at least as much cognitive dissonance as being, say, a Log Cabin Republican, without even the excuse of being able to find hot guys at CPAC. In any case, as good liberals we wish to make it absolutely clear that while we find this stuff repugnant, we also blah blah blah his sacred first amendment right to blah blah blah (even though his head is clearly stuffed full of sick twisted fuckery and slime).

UPDATE: Very Important Clarification: "Manboobz" is a blog that mocks MRA idiots. It's written by David Futrelle, who is the GOOD GUY on this issue. Please do not slag on him in the comments. It's like saying, "Man, I hate all those Nazis, especially that Von Eisenhower guy."

Check out Wonkette on Facebook and Twitter, and, if you agree that "Free To Be..." was well-intentioned but just too damned earnest, Doktor Zoom is on Twitter too.