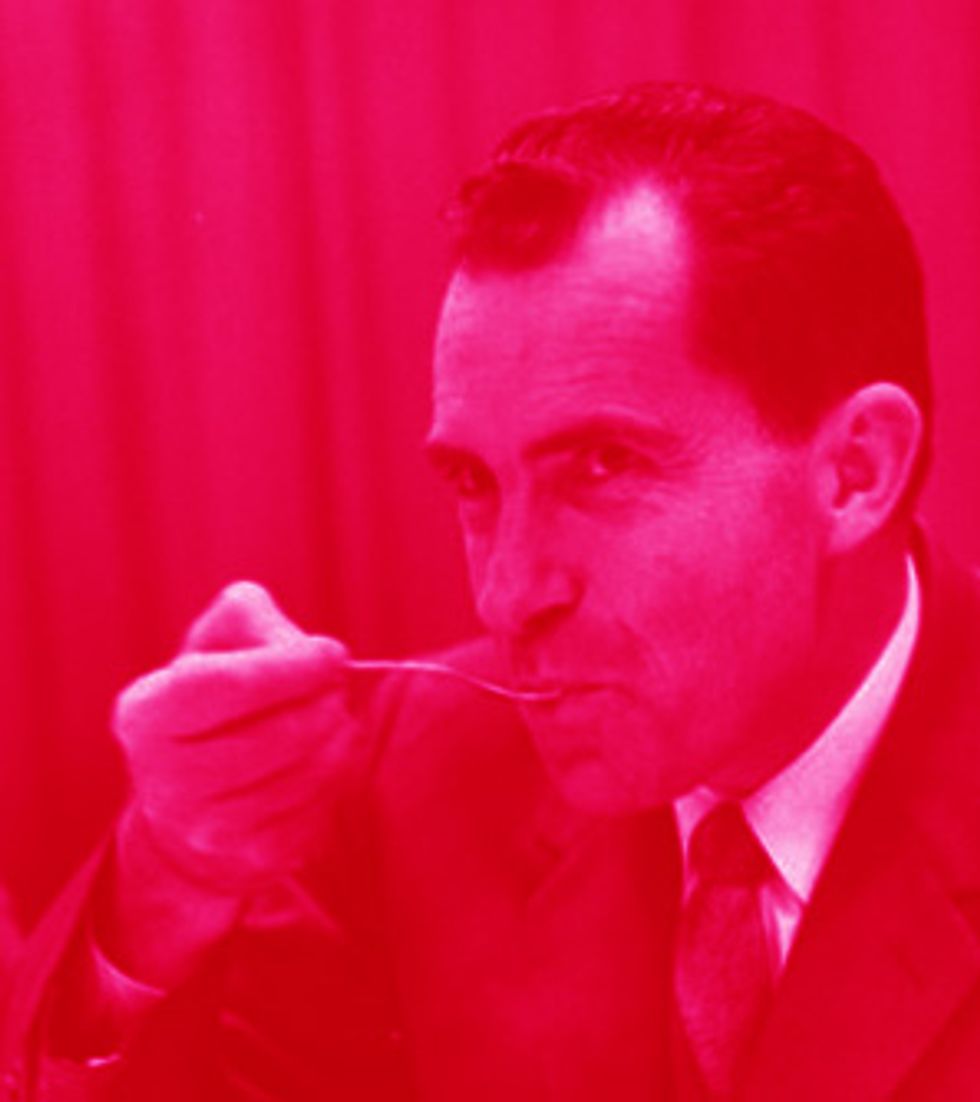 The following is our annual repost of Ken Layne's Real Cranberry Business, because when we bought this bitch we bought the archives too. One hundred and seventy two years from now, "Ken Layne" will be retelling his cranberry business recipe ... from the grave! So enjoy this re-post of this Holiday Favorite from 2009:

No first lady could even imagine making something as wonderful and perfect as your editor's famous Wonkette Actual Awesome Real Cranberry Business. It is one of those things that just blows people away, because they assume it must be so hard to make real cranberry relish because why else would we eat that Jell-o'd aspic glob from the can? IT MUST BE SO HARD. No, it isn't, so stop whining about everything, for once.

This dish takes exactly three minutes to prepare, and another 10 or 15 minutes in the oven, and you don't even have to think about it. Pre-heat the oven, prepare the cranberries, "slide in the pyrex," as they say, and just turn the oven off, go outside, enjoy a marijuana cigarette, make snow angels in the trash pile outside the neighboring foreclosure, relax.

There are many recipes you can find "on the Internet" for fresh cranberry sauce, but you don't need to do that anymore. Just send this one to your xBox or iPad or whatever and be DONE, done with the search for the ideal cranberry relish recipe.

THE THINGS YOU NEED:

NEXT: Either right now or tomorrow or 30 minutes before carving time -- IT DOES NOT MATTER -- you wash the cranberries. (The thing that looks like a '50s space helmet, it is called the colander, fill it with the cranberries and put it under the cold faucet).

Dump said berries in the Pyrex baking dish, like the one people might use for lasagna or baked manicotti. (This is a good time to remove whatever weird stuff the Stephen King characters who pick cranberries might've dropped in the bucket: loose teeth, "biker earrings," etc.) Get the cheese grater and just grate on some sad-but-firm orange, right on the peel, so that the little bits of orange peel fall down upon the lonely berries. It is fine if some bigger chunks -- like, half-inch-long shreds, but no bigger than that -- fall down there, too. It adds "color" ... orange color, in fact. Do this until you're tired of doing it, at which point there's probably about three teaspoons' worth of orange "zest" in the pyrex, with the cranberries. Don't pick it out and measure it or anything, just show some confidence. For once.

Cut open that poor orange you've just Gitmo'd, and squeeze the juice into your cranberry business. Do not drop the orange seeds in there, Jesus christ ....

Now drizzle a couple-five shots of bourbon on the berries. And sprinkle about half a cup of granulated cane sugar over all that. (Generally, cranberry relish recipes call for some insane amount of sugar, like three cups. Do not ruin everything, okay? Using not-so-much sugar produces a tart but still sweet-enough relish that is to be served with savory dishes like turkey and dressing, right? If you want to put this on a peanut butter sandwich, by all means use fifteen cups of sugar and chase it with an "energy drink" or whatever. Let freedom reign.)

Cover the baking dish with foil and put it in the oven. Doesn't really matter, whatever the oven is set to, which is going to be in the 300-425 range for your general Thanksgiving dishes crowding the oven. You also don't need to be a dick and start yelling about how somebody needs to move the mac-and-cheese or the brussels sprouts under the broiler (and you SHOULD have simple cut-in-half olive-oil-brushed brussels sprouts under the broiler!) because you must get in your cranberry relish. Anytime is fine, and plus who will be impressed if you keep talking about it, beforehand? They might notice how easy it is to make, and then who are you? You are basically Newt Gingrich. So go outside and yell at a Mexican.

Come back inside, and please wash your hands if you were smoking or "playing with the dog" out there, and see what is going on. Are people tense? It is probably time to open a bottle of wine, go ahead and pass around maybe a Petite Syrah, something that will go with maybe some pita chips or apple slices, whatever, try to get people to relax. It is okay to have "Irish Coffees," too, because it's daytime.

When the cranberry business is bubbly and the berries have this nice soft-but-firm kind of thing going on, take out the pyrex and let it cool somewhere out of the way. If there's room in the fridge, you can just put the tray in there once it's cool to the touch. But there's no room, jesus just look at all the food in there, plus there are about a million beers for tomorrow, so just scrape it all into something pretty, some kind of thing you might put chutney in, or whatever (ask mom).

Serve and watch how people say, "OMG I only ever had it from a can," etc.

Do not forget our other Holiday Recipes for Thanksgiving! Betty Ford's Chocoholic Icebox Fantasy and K-Lo’s disgusting hamburger-stuffed turkey and Mamie Eisenhower's Lesbian-Soviet Hockey Rink and Rush Limbaugh's horrifying "Under The Sea Salad" and Nancy Reagan's Racial-Transcendence Monkey Bread! We will post them all this afternoon, but if you need "ingredients," clicky on the direct linkies right there!