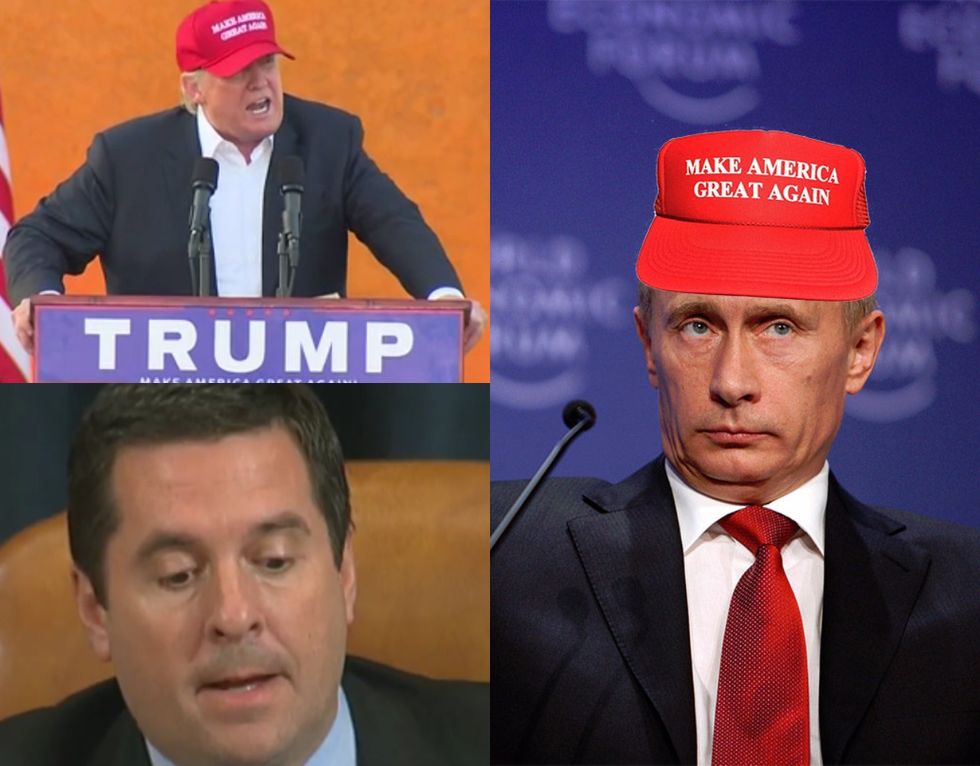 That's right, Devin, you don't GET a hat.

It's nice when everybody agrees, don't you think? We like it when people find common ground. Like for instance, Tuesday night, the entire internet came together to experience the pure, unfiltered, orgasmic joy that was Donald Trump tweeting "covfefe" and then maybe falling asleep on the toilet. Even Donald Trump got in on the fun, maybe because he's learned for the first time ever that it's more fun to laugh WITH people than to pout in a corner while the whole world makes fun of your tiny hands.

Let's watch these boys dance together, like two ballerinas in love (Vladimir and Donald), and also a dancing clown who comes on and does armpit farts during intermission but isn't graceful enough to be a real ballerina (Devin).

And then there is Vladimir, in an interview with Le Figaro (summarized nicely here at Talking Points Memo):

And then there is Devin, speaking at a fundraiser in April, just after he "recused himself" from the House Intelligence Committee's investigation into Trump-Russia, because he had been running around being Trump's little obstruction of justice buttboy. He, of course, still has his grubby paws all over the investigation, ethics violations be damned:

“The Democrats don’t want an investigation on Russia. They want an independent commission,” Nunes said at the fundraiser. “Why do they want an independent commission? Because they want to continue the narrative that Vladimir Putin and Donald Trump are best friends, and that’s the reason that he won, because Hillary Clinton could have never lost on her own; it had to be someone else’s fault.”

“They have tried to destroy this Russia investigation, they’ve never been serious about it,” he added.

Yes that is right, Democrats are taking away from the REAL ISSUE of the Russia investigation, which is Hillary Clinton and emails and probably Benghazi somehow. Devin Nunes will get back to that very important work, which he should be very proud of, as soon as his little "ethics" issues are cleared up.

Anyway, the point is that all three of these lovable boys agree that you are A Idiot for wanting to know the truth about Trump and Russia, because isn't the obvious real truth that Hillary is a bitch who was resoundingly defeated by negative three million votes?

Never mind that there is one of the nation's best, Robert Mueller, serving as special prosecutor in the FBI's investigation, and Jared Kushner, the president's angelic son-in-law, is a person of interest in that investigation because he was trying to create back channels with Russia, and probably for other reasons too. Never mind that, as Josh Marshall writes, the news about Jared's secret meetings with the Russians is starting to bring into focus the REAL story (or one of them) of Team Trump's ("alleged," blah blah whatever) collusion with Russia, and it's not a pretty picture.

Never mind that both the Senate and House intelligence committees are throwing around their subpoena sticks and want to talk to literally everybody who's ever met, dined with, or gone on a puss-grabbing holiday with the president, especially if that person has weird Russian connections, which they all do, because literally everybody Trump knows, with the exception of his son Barron, seems to have weird Russian connections.

Yeah, Vlad, Don and Devin. You guys are right, we are just sore losers. You are not crazy, WE are crazy.

Just kidding, those three can take their gaslighting and shove it up their assholes.

Wonkette is fully funded by YOU! No ads! If you love us, click below, for to fund us!