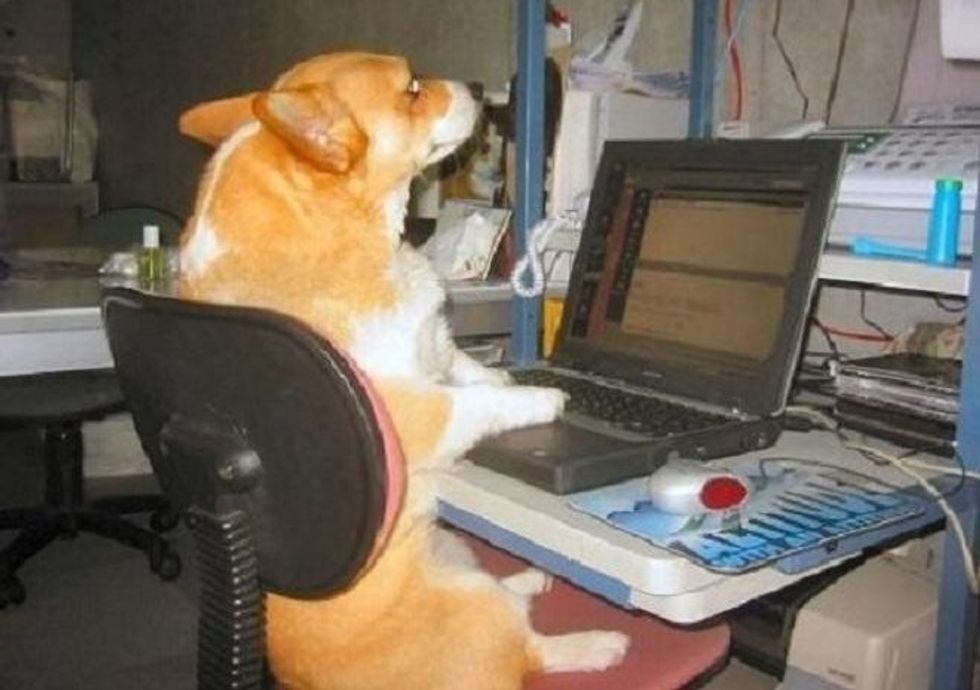 Some dogs type better that certain PhDs, for that matter.

The Washington Post celebrated Christmas with a great big article about a major FBI investigation into Russia's disinformation campaign against American politics and social media, which extended beyond the 2016 election and continues to bedevil intelligence agencies, especially as the Trump administration seems unwilling to acknowledge it's really a problem. With another national election coming up, that seems important, maybe. One of the examples the piece looks at is the journalistic output of one "Alice Donovan," who seems not to be a real person at all, despite having published a whole bunch of stuff all over the interwebs. A leaked FBI document indicates there is no single person behind the byline, but rather that she was the product of Russian trolls. As the Post notes, her earliest work wasn't especially political, but as time went on, Donovan's work aimed at "stoking discontent toward Democratic front-runner Hillary Clinton and touting WikiLeaks," like so:

“There’s no denying the emails that Julian Assange has picked up from inside the Democratic Party are real,” she wrote in August 2016 for a website called We Are Change. “The emails have exposed Hillary Clinton in a major way -- and almost no one is reporting on it.”

Over at lefty news site CounterPunch, which published one piece by Donovan in 2016 -- a relatively apolitical thing about cyber warfare -- and another four in 2017 that criticized American foreign policy in Syria and Venezuela, the news about Donovan prompted a piece by editor Jeffrey St. Clair and managing editor Joshua Frank that tries to piece together how they got hoodwinked by a writer who might not actually have been, as they say, "a corporeal being."

But first, they have some important questions about all this:

But what about the question of identity? Is the writer really who she says she is? Does she have a hidden agenda? If so, what is she hiding? Does it invalidate what she says? Why?

Have we entered a time when to be published, writers must prove their identity to their publishers and readers as if they were passing through the TSA checkpoint in an airport? Recall that in penning the Federalist Papers, so crucial to the shaping of the US Constitution, Hamilton, Jay and Madison all cloaked themselves behind the pseudonym of “Publius.” How much does identity really matter? What happens if the news is true, but the writer is a fake?

Hmmm. Let us ponder this! First off, no, nobody is talking about mandatory writers' licenses, so let's toss that dopey TSA analogy out to start with. We'll also leave aside the bit about the Founders using pseudonyms, a practice whose most relevant modern legacy is the adoption of pompous Latin-sounding usernames by idiots who are certain they're the next Madison, or at least emulating Ender Wiggin.

Even so, it's probably a good idea for publishers and editors to make at least some effort to verify that a writer really exists, if only so the checks won't bounce. In the case of CounterPunch and Donovan, that wasn't a concern, however, since they paid her only in reputation. So there's another good incentive to pay your writers -- you're a bit more likely to get real people, or at least to force fakes to leave a paper trail of some kind. But does it really matter anyway if the "news is true but the writer is fake"? That's a stumper all right, although in the case of "Alice Donovan," it also turns out to be something of a red herring, since as St. Clair and Frank discovered when they took a closer look at Donovan's output, a lot of it was just plain plagiarized from other writers, who tended to have heartbeats, as far as they could tell. So while some of the news was real, that was only because other people had written it. The person whose writing CounterPunch published appears not to exist, and whoever it was answering the email at the address she gave ultimately stopped replying when the editors asked for some kind of proof that she was a real human.

While the editors eventually seem convinced there was no such person sending them submissions, they don't quite commit to the interpretation that she was necessarily a Russian troll, because they can't say that for sure either, and they don't want to go trusting the FBI, since American intelligence has run its own fake journalism scams in the past, too, and then there's the Washington Post and New York Times, which got snookered by journalists who submitted fake stories, too. They admit they "blew it," but also want to make it clear they don't see how much harm could have been done by the plagiarized but not very influential stuff they published:

But it must be admitted that her repeated screw-ups are terrible tradecraft for a troll, which may undermine the case against her as some kind of deep cover operative. If Donovan’s intent was to destroy “our democratic values” by committing crimes against journalism, she’ll need to swing a lot harder to surpass the damage done by Judith Miller.

Good one! Of course, when CounterPunch was listed by Propornot.com as a site that might be passing on Russian-generated content, a lot of folks automatically assumed Propornot had to be garbage, since Counterpunch is a respectable lefty site. Maybe more people should have said, "HUH!" We are just asking here.

St. Clair and Frank also complain, "If the FBI was so worried about the risks posed by Alice Donovan’s false persona, they could have tipped off some of the media outlets she was corresponding with," and fret that the FBI was "snooping on American journalists" -- which seems a bit off target, since the FBI wasn't monitoring a "journalist" -- it was monitoring a probable Russian troll who does not seem to exist. So, no, nice try on the "icy intrusion on the First Amendment" there -- as they acknowledge, the FBI didn't interfere with their publication. The concluding graf seems a tad self-aggrandizing:

For a free press to function, journalists need to be free to communicate with whomever they want, without fear that their exchanges are being monitored by federal agencies. A free press needs to be free to make mistakes and learn from them. We did.

Um. Seems odd to acknowledge that no spooks were going through either their real or your virtual mail, and to simultaneously worry about being "monitored." So we guess this example of the First Amendment not being interfered with by the FBI should teach the FBI a real lesson about not interfering with the First Amendment.

Yr Wonkette is supported by reader donations. Please click here to send us money. NO RUBLES.