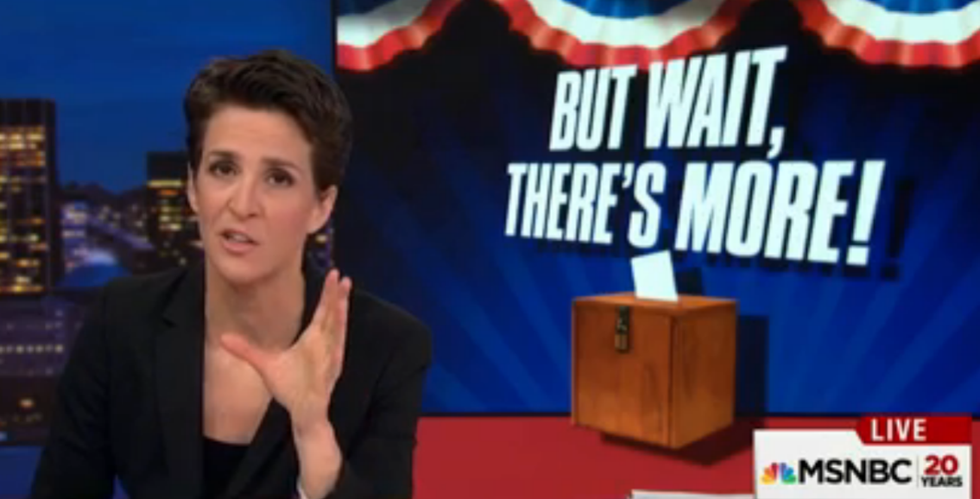 Rachel explains to the world how great Wonkette is.

Oh hey, what did yr Wonkette do last night? INQUIRING MINDS WANT TO KNOW! Well, we were winning trivia with our trivia team at a place that serves alcoholic beverages, and also our words were being read on "The Rachel Maddow Show," by Rachel Maddow, who LOVES YR WONKETTE SO MUCH. (!!!)

It happened toward the end of the show, as she set up her interview with Louisiana Senate candidate Foster Campbell, a cattle-ranching Democrat who wears Wrangler jeans on his butt. We told you all about him on Wednesday! If you'll remember, Louisiana's run-off election is December 10, and if Campbell were to win, Republicans would only hold a 51-49 majority in the Senate, which means it would be easier for Democrats to pull a couple of sane Republicans over to their side, were President Trump to seek congressional authorization to nuke Sweden for making fun of his hair with a funny accent, for example. (HAVE YOU GIVEN DOLLARS TO FOSTER CAMPBELL YET? YOU NEED TO DO THAT, BECAUSE THIS IS IMPORTANT.)

So! Watch the video, where our BFF Rachel called Wonkette "the best website in the world," and proceeded to read A WHOLE PARAGRAPH we wrote, with our brain:

Here's the paragraph she read, in case you are disobeying us and not watching the video:

You will do this because, if Campbell wins, the Republicans will only have a 51-49 majority in the Senate, which gives Dems just a little bit more power to push back on Donald Trump’s worst plans. It means it won’t be as much of a stretch to try to form majority coalitions with Republican senators who are occasionally decent on specific issues, like John McCain with Russia or Rand Paul opposing Rudy Giuliani and John Bolton for secretary of State. If 49 Democrats can pull a McCain and a Susan Collins across the aisle to oppose Trump erecting a statue of Vladimir Putin on top of the White House, we might be able to at least mitigate Trump’s damage, is what we mean.

Correct as usual, OURSELVES!

After that, Rachel interviewed Campbell, and you should watch that too, and then give him money, and also pat us on the fanny a million times to congratulate us for being THE BEST.

Now go share this post on the Facebooks, like you are doing EVERY DAY to combat fake news with wonk and style, as you have been instructed.