News
Evan Hurst
August 19, 2015 12:00 PM
Wonkette is pleased to report that we officially exist on the internet, after years of relying on strangers to notice us wearing Wonkette T-shirts and carrying Wonkette tote bags (available in the Wonkette Sweat Shop for the low, low price of "money"!) and crinkle their eyebrows like maybe they recognize that logo from somewhere.

Rachel Maddow opened her show Tuesday night like she always does, with a long professorial segment to teach us important knowledge about the world we live in, and this time it was devoted to how Republicans LOVE Donald Trump, no matter what gross things he says about Mexicans being rapists, or Megyn Kelly having her lady period on the debate stage, or any other nasty thing that comes out of his appleheaded vagina mouth. Why? Because completely aside from ideology, Republican voters are ASSHOLES.

In fact, a poll was just released, which found that not only is Donald Trump the FIRST choice for Republican asshole primary voters, he is also the SECOND choice for the assholes who didn't pick him the first time around. This led yr Wonkette's Doktor Zoom to write a beautiful headline that said "Republicans Want Trump, And If Not Him, Then Maybe Trump Would Do."

And guess who loved that beautiful classy headline? Rachel Maddow loved it! It made her giggle and laugh, and then she read the sexxxy story about Donald Trump, and she giggled some more about the paragraph what said this:

[A]t this point, people are simply barking “Trump! Trump, Trump, TRUMP!” at anything a pollster asks. The New York real estate developer was also named Americans’ favorite flavor of ice cream, most likely to win the World Series, and preferred method of contraception. 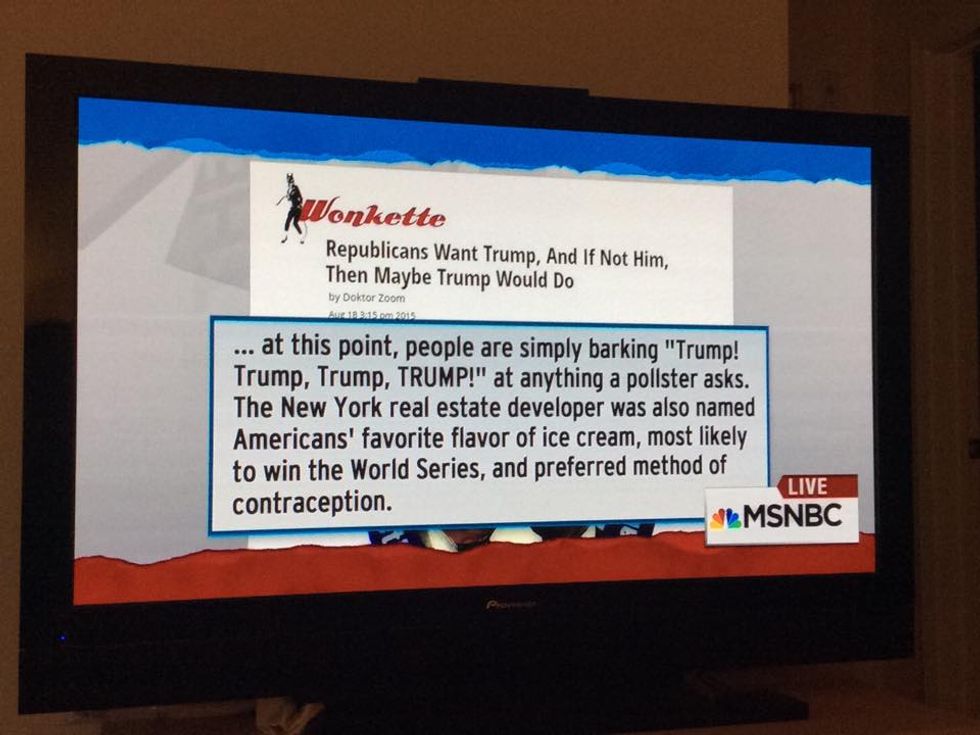 Look, right there, you can see how it says "Wonkette" and "Doktor Zoom"! WE ARE NOT MAKING SHIT UP.

So there you have it! Yr Wonkette would like to thank Rachel Maddow for telling us that we are real, and also for the little traffic bump we got last night when she said our name on the television. We'd also like to gently suggest (JUST SAYING) to her that, you know, if it was ever a slow news day and she needed one of us (Evan lives closest to New York, if it's a pissing contest) to come on the show and help her viewers understand how to make dirty jokes about politics, or maybe just needed a special Weekly Wonkette segment for her viewers to get excited about, we probably would be willing to do that, IF SHE ASKED NICELY.

Or if she just wanted to go to brunch with us, that would be fine too, whatever.