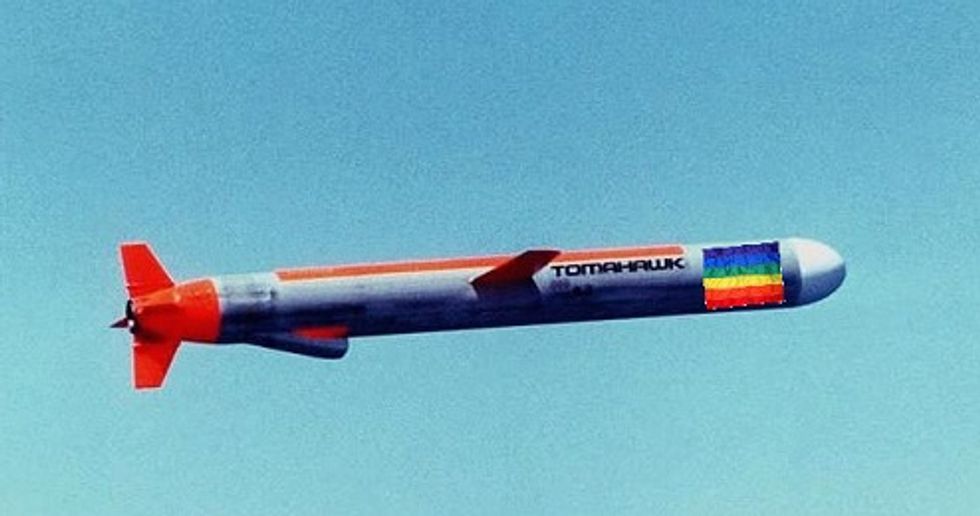 American Family Association radio talker Sandy Rios is doing her best to catch up with Bryan Fischer in sheer stupidity. It's so nice to see women getting ahead in a male-dominated field! Or maybe it isn't, because Rios is very, veryconcerned that the Navy has too many women and gays, and that this will somehow prevent a possible attack on Syria from working right. Don't ask her how, she is just a simple woman and doesn't know how all those big machines work!

On her radio show Tuesday, Rios expressed doubts about the combat-readiness of U.S. forces in the Persian Gulf, and also that untrustworthy John Kerry, who is not to be trusted:

This is the nature of John Kerry, he always does this; he’s not to be trusted. This is the reason why I think we have to be concerned about going into Syria because the people that we’re looking at to lead us are untrustworthy people. There’s a second reason and that is military readiness. When I looked at those battleships going into the Mediterranean, supposedly getting ready for battle in Syria, I couldn’t help think about all the stories I’ve read about how women now are in the ranks of the Navy, getting pregnant at exponential numbers; when I think about the folding in and the repeal of Don’t Ask Don’t Tell and the homosexual takeover of so much of our military I’m not sure how effective those naval ships will be.

What if all those women get their birth control pills jammed into the missiles? Or if they're so busy doing sex and getting pregnant that they can't even make the missiles come out of the ships' missile-holes? The missile-holes may just be clogged with babies! And don't even get her started on the gay sailors, who will certainly be too busy doing sodomy to get their missiles launched.

Also, why is Barack Obama using these "cruise missiles" anyway? America's missiles should not be out "cruising" for the gay sex, they should be meeting a nice straight weapons system and having babies like God intended. But not on the ships.