Raise One For Molly Ivins's Birthday, Wonkers, We Miss Her Now More Than Ever 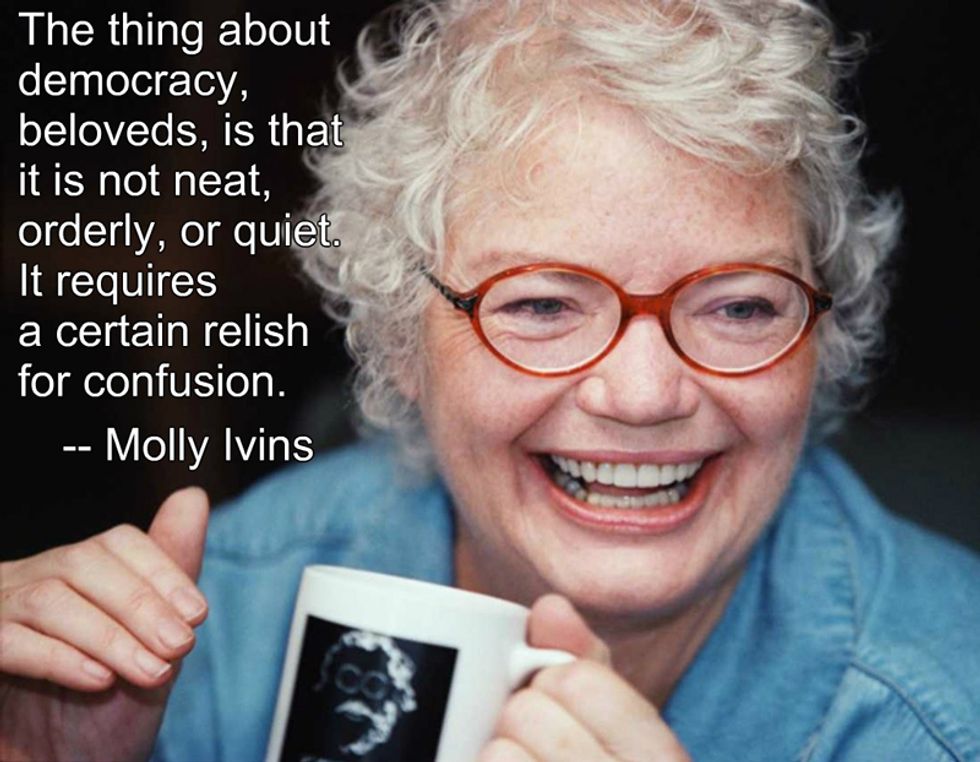 Today is Molly Ivins's birthday, and when we finally make this a more just world, it will become a national holiday. As it is, we'll keep celebrating it right here at Wonkette and do what we can to keep alive the spirit of Texas's greatest contribution to American humor and political commentary. She'd have been 72 today, and while we don't believe in an afterlife, we sure understand the impulse, because it's such a goddamned shame that Molly has to miss this election year. If someday we wake up in an Elysian field where she and Ann Richards are drinking and cutting loose with profane observations on doings back on Earth, we'll be very happy to have been wrong.

We are not inclined to think the universe has anything near that sense of fun or fairness, however, given the simple fact that we lost Gilda Radner at 42 and Molly Ivins at 62, but Henry Kissinger still walks this earth at the age of 93 and writes op-eds for the Wall Street Journal. And let's all just say one more time, together, "Fuck cancer."

There's never a bad time to quote Molly Ivins, so let's light some birthday candles, have some cake, and remember a woman with a unique talent for looking at public idiocy, holding it up to the light, and blowing it to rags and atoms with a few words:

Can you imagine what Molly would do with characters like Ted Cruz, Carly Fiorina, Rick Scott, or Katrina Pierson? Molly might not have found the solution to the problem of Donald Trump, but oh, lord, would she have gotten some columns out of that man!

Our country's suffering from a Molly Ivins deficit. Go get yourself some Molly Ivins books: We're fond of her first big bestseller, Molly Ivins Can't Say That, Can She? as well as the election-year warning that she co-wrote with Lou Dubose, Shrub: The Short but Happy Political Life of George W. Bush, and the posthumous collection, Molly Ivins: Letters to the Nation.

And we'll close with a favorite: Here's the first time Yr Dok Zoom -- and a lot of us outside of Texas -- ever heard of Molly Ivins, her 1986 MacNeill-Lehrer Newshour piece on Texas and its many fine examples of Public Ort, which they rebroadcast as a memorial in 2007. Enjoy: