Rand Paul Has A Shotgun For Your Drone, Buddy 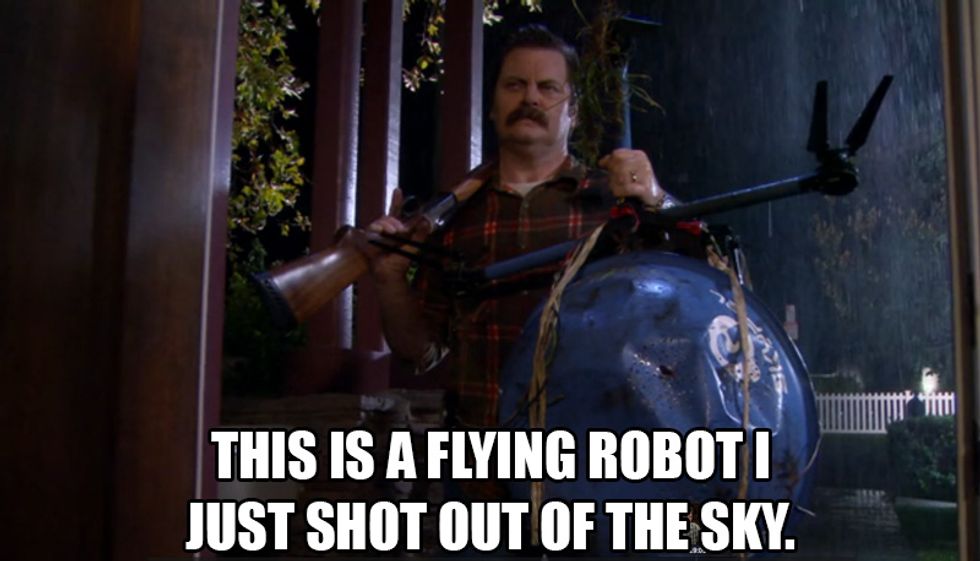 Rand Paul has some important thoughts about privately owned drones: He will blow them away with the Constitution and a shotgun. CNN did something they called a "Historic Snapchat Interview" with Rand Paul, using a popular phone app, which was such a huge success that to allow people to actually view the damned thing, they filmed it with a conventional video camera:

Following the recent follies of a drunk guy who crashed a friend's radio-controlled quadcopter on the White House lawn -- and did we mention he was drunk? And a security contractor? -- CNN's Ashley Codianni asked Paul if he thought unmanned aerial vehicles should be banned.

"Drones should only be used according to the Constitution."

"But if they fly over my house, they better beware because I've got a shotgun," he added with a little smirk.

That's pretty much perfect Rand Paul. What on earth does the Constitution say about drones? Rand will happily stay up all night in the dorm explaining that. Oh, but also, let's throw in a line about shooting things, because that's also in the Constitution.

It's just one more important stage in the evolution of Rand Paul's thoughts, such as they are, on drones. First he filibustered for a million years to warn that the government might start murdering Americans with drones any minute now, but then he was OK with death robots taking out petty criminals, and now he just can't wait to blow one of the little bitty ones out of the sky himself.

Then again, as more people start buying the gadgets and occasionally flying them while schnockered, maybe that town in Colorado that wanted to sell drone-hunting licenses will revive their plans for an annual Drone Shoot.