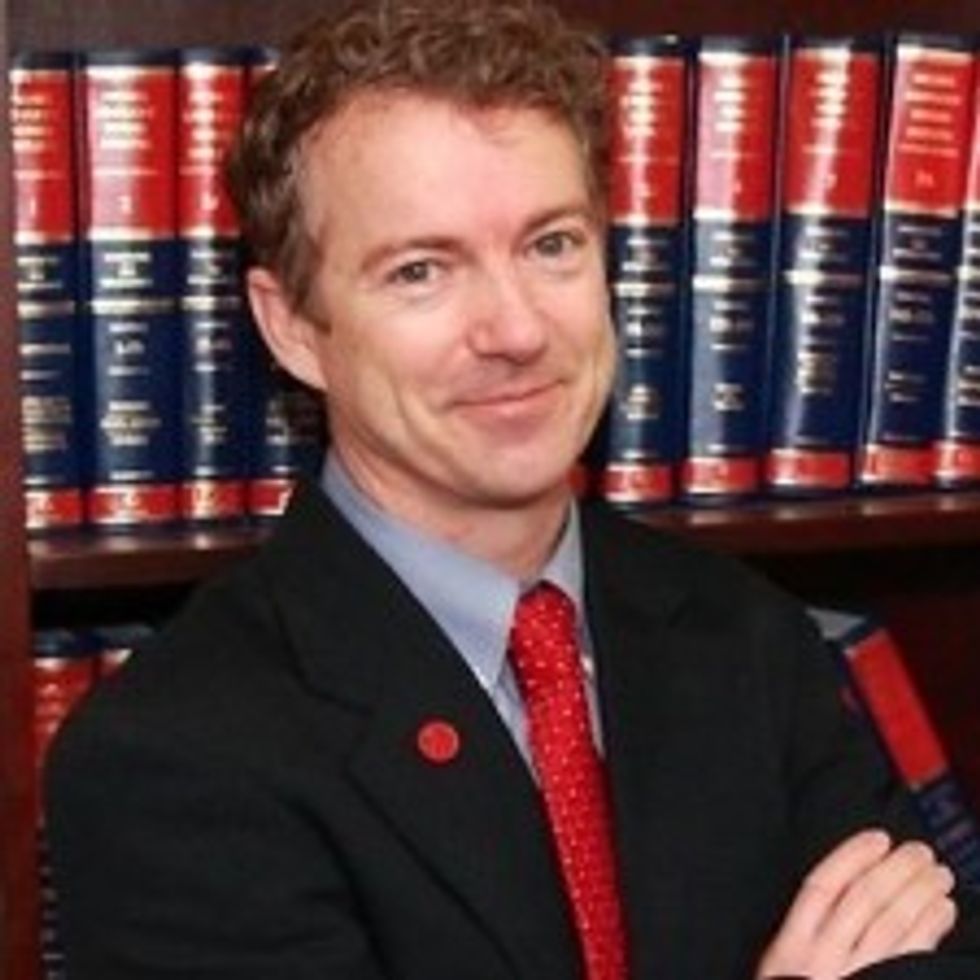 Poor Rand Paul. It’s hard out there for a libertarian, what with The Man always trying to keep him down, pointing out the ridiculousness of his ideology and how it never holds up in real-life scenarios. But what can a man like Rand Paul do except keep fighting the good fight, keep on keeping on to the water’s edge, because Rand Paul has been to the mountaintop, Rand Paul has seen the Promised Land, and he yearns for the day when all little boys and girls, black or white, yellow or red, liberal or conservative or libertarian or communist, will be judged not by the color of their skin or the content of their political ideology, but by whatever’s left. Character? Sure, let’s go with character.

So that’s Rand Paul up there, speaking to the Urban League today as part of his continuing efforts at minority outreach. And it’s too bad he said something so inarticulate, because he made some otherwise good points. Enforcing the Voting Rights Act? Remarkably this is a controversial position for a Republican in 2014, so good for you, Rand Paul. Reforming our ridiculous sentencing laws for drug convictions? Okay! Trying to empathize with minorities by calling yourself one because of your ideology? Um…

As a public service for Rand Paul, we’ve put together a handful of scenarios to help him understand the problem with his little dumbass statement.

Rand Paul browses the racks of high-quality Hugo Boss dress shirts and Kenneth Cole neckties. The obsequious salesman is happy to answer his questions and help him pick out the right things. The security guard stands to the side, beaming. Rand Paul takes all the time he wants, pays for his purchases with his Visa Gold card, and exits, another satisfied consumer of goods and services in our economy. No one asks him about his political ideology.

The black man browses the racks of high-quality Hugo Boss dress shirts and Kenneth Cole neckties. The security guard trails him, not very discretely, never letting the black man out of his sight. The salesman also busies himself rearranging some displays nearby. Uncomfortable, the black man hurriedly picks out a couple of shirts and ties and goes to the register to pay. He also hands the salesman a Visa Gold card.

SALESMAN: Do you have some ID?

The black man produces his driver’s license. The salesman glances from the license to the credit card to the black man’s face several times. Then he calls the credit-card company to confirm that the black man is who he says he is. Sort of satisfied, he rings up the black man’s purchases, puts them in a bag, and hands them to him. The black man exits, a not-very-satisfied consumer.

Rand Paul owns a very nice 2014 Mercedes-Benz C-Class, silver, with leather seats and a sunroof. Every morning he gets in his nice expensive car and drives through his nice upscale neighborhood to wherever he wants to go and never gets pulled over for anything, particularly not because a cop sees him and thinks “Libertarian? Then where did he get that nice car, HENGHHH?”

A black man owns a very nice 2014 Mercedes-Benz C-Class, silver, with leather seats and a sunroof. Every morning he gets in his nice expensive car and drives through his nice upscale neighborhood in the direction of wherever he wants to go. Sometimes he looks in his rearview mirror and sees the lights of a police car behind him. He pulls his nice Mercedes to the side of the road. The police officer approaches, hand resting a quarter-inch from the butt of his gun.

The black man hands over his license and registration. The cop studies both intently as if he is a rabbi poring over the Talmud.

BLACK MAN: Was I speeding? Did I roll through a stop sign? Do I have a burned-out taillight?

The cop returns to his car and gets on the radio. The black man drums his fingers, looks at the time. He’s going to be late for a meeting at the law office where he is a rising star. Finally the cop returns.

BLACK MAN: Is there a problem? I really am late…

COP: So you really are (Insert name) of (Insert tony address)

The cop stares at him.

COP: Step out of the car, please.

BLACK MAN: For what?

COP: STEP OUT OF THE CAR, PLEASE. I WON’T TELL YOU AGAIN.

The black man gets out of his car. The cop pats him down, asks him a bunch of questions, keeps him standing there for half an hour denying he’s a drug dealer, before sending him, humiliated, on his way.

Rand Paul enters the weekly Senate Republican Caucus Luncheon, held in a fancy Capitol dining room. Everyone greets him warmly, shakes his hand and slaps his back in an ostentatious display of Senatorial bonhomie, then goes back to ignoring his demands to abolish the Federal Reserve. Rand Paul eats his lunch and laughs at his colleagues’ jokes about liberals that they heard on Rush Limbaugh this morning, but inside he is seething because no one takes his ideology seriously.

A black man enters the…HAHAHAHA A BLACK MAN AT THE SENATE REPUBLICAN CAUCUS LUNCHEON DON’T BE RIDICULOSE…Oh wait, it’s Tim Scott of South Carolina. Everyone greets him warmly, shakes his hand and slaps his back in an ostentatious display of Senatorial bonhomie. Tim Scott eats his lunch and laughs at his colleagues’ jokes about liberals that they heard on Rush Limbaugh this morning. Inside he is not seething, because he is a conservative and they all agree with him.

Meanwhile, Rand Paul continues to seethe at the injustice of everyone liking Tim Scott and not him. He thinks: this must be what it was like to be a black man in the South in the 1950s. I should put that in my next speech to the Urban League.

Follow Gary on Twitter. He too knows the pain of being a minority - he was once the only person in high school who kind of liked Winger.