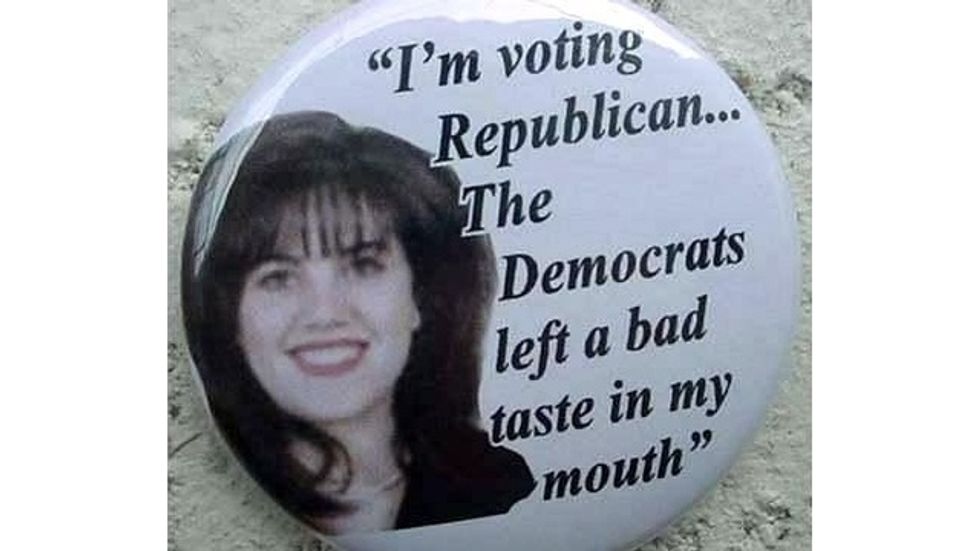 In case you missed it because you were sleeping off your Saturday hangover, or had something better to do like watching paint dry, Sen. Rand"Aqua Buddha" Paul mansplained, as only a Republican can, how there isn't really a war on women, except there is, but Democrats started it. (Also, he's rubber, you're glue, and YOUR MOM. Oh SNAP!) Oh, and the war that isn't a war except it's a war by Democrats is over now, the women won because his niece goes to Cornell, let us weep for the men.

Well, you know, I mean the Democrats one of their big issues is they have concocted and says Republicans are committing a war on women. One of the workplace laws and rules that I think are good is that bosses shouldn’t prey on young interns in their office, and I think really the media seems to have given President Clinton a pass on this.

He took advantage of a girl that was twenty years old and an intern in his office. There is no excuse for that, and that is predatory behavior, and should be something we shouldn’t want to associate with people who would take advantage of a young girl in his office. This isn’t having an affair. I mean this isn’t me saying he’s had an affair we shouldn’t talk to him. Someone who takes advantage of a young girl in their office. I mean really? And then they have the gall to stand up and say Republicans are having a war on women.

So yes, I think it’s a factor. Now it’s not Hillary’s fault, but it is a factor in judging Bill Clinton in history.

Obviously, all the ladies are super grateful that the senator who once kidnapped a woman in college as a "prank" is speaking out against taking advantage of women. Thank you, Uncle Sugar, we mean Sen. Paul.

But hey, since Paul brought it up, The Scar does have some thoughts, since you didn't ask:

“That said,” Scarborough continued. “If Hillary Clinton attacks the Republican Party’s handling of women and treatment of women and disrespect for women and suggests they’re misogynists etc., etc., etc., it does seem to be a fair question to ask right now a few years out, does the media have a responsibility to say, ‘Well, let’s see what happened when you were in the White House and how women were treated when you were in the governor’s mansion and the White House?’ Is that fair?”

“Does this not compromise Hillary Clinton’s ability to bash Republicans as being terrible towards women, misogynists, etc., etc.?”

We guess Paul and The Scar have a point. There's just no way women can possibly oppose sexist Republican policies now, since Rand Paul finally did the media's job and exposed Clinton's BJ. Happy Christmas, war is over, we guess. Just let us know where to surrender and sign up for our mandatory transvaginal ultrasounds. Because sometimes a cigar is exactly the same thing.