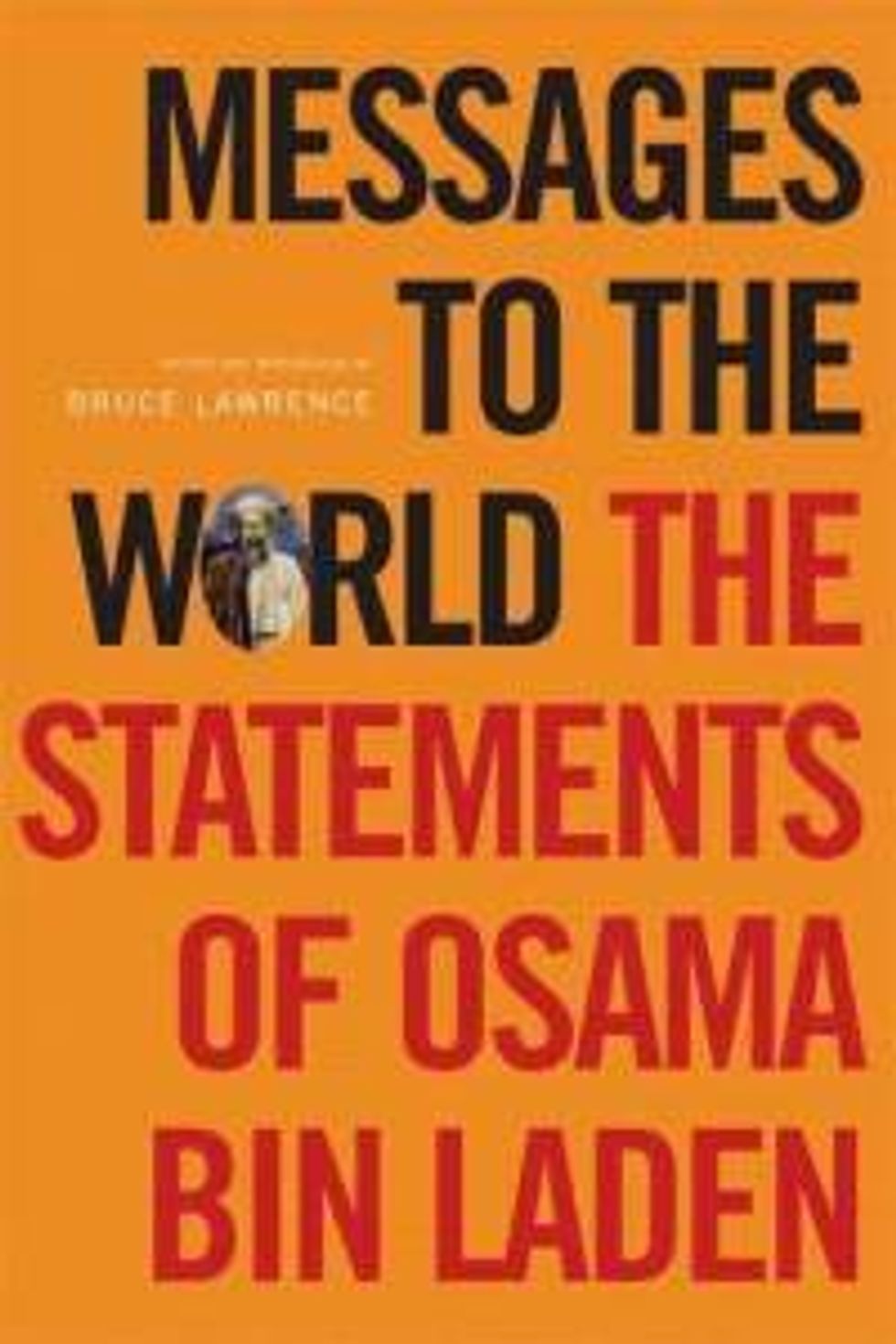 Angsty rich kid Osama bin Laden could have been just another Saudi playboy, loitering his days away trading oil and chasing Lebanese models. But he just HAD to rebel against his wealthy family and their friends in the Saudi royal family, forever proving that he's His Own Person or something. And so he embraced the counterintuitive idea that the way to show solidarity with his fellow Muslims -- particularly poor and oppressed ones -- was to murder loads and loads of Muslims (among others). As you may have heard, last weekend he died a neighbor of our allies in the Pakistani military (but not before distributing terror rabbits to local children). Now that the world's most iconic mass murderer is dead, it might be worth revisiting his speeches and interviews.

In 2005, lefty publishing house Verso (and by "lefty" we mean Actually Lefty, not lefty in the "GAWD, Hillary Clinton is such a lefty" way) collected several of Osama's press statements and interviews into a book titled Messages to the World. As you might imagine, bin Laden has (had) a lot to say.

If you've ever wondered what it was that irritated bin Laden so much, look no further than his formal declaration of jihad from 1996:

It is no secret to you, my brothers, that the people of Islam have been afflicted with oppression, hostility, and injustice by the Judeo-Christian alliance and its supporters...Your blood has been spilt in Palestine and Iraq, and the horrific image of the massacre in Qana in Lebanon are still fresh in people's minds. The massacres that have taken place in Tajikistan, Burma, Kashmir, Assam, the Philippines, Fatani, Ogaden, Somalia, Eritrea, Chechnya, and Bosnia-Herzegovina send shivers down our spines and stir up our passions. All this happened before the eyes and ears of the world, but the blatant imperial arrogance of America, under the cover of the immoral United Nations, has prevented the dispossessed from arming themselves.

You would think the man watched 90's-era CNN International all day! He continues:

All the false propaganda about the supposed rights of Islam was abandoned in the face of the attacks and massacres committed against Muslims everywhere, the latest and most serious of which--the greatest disaster to befall the Muslims since the death of the Prophet Muhammad-- is the occupation of Saudi Arabia, which is the cornerstone of the Islamic world, place of revelation, source of the Prophetic mission, and home of the Noble Ka'ba where Muslims direct their prayers. Despite this, it was occupied by the armies of the Christians, the Americans, and their allies.

Elsewhere in the book, Osama talks about his dislike of Jews, his preference for Pakistan over the evil infidel country of India and his ideal society: imagine Taliban-era Afghanistan, but with even less music and even more Koran-reading and infidel-killing and art-destroying.

He also gives interviews about his plan to drag the United States into a long, bloody and resource-sapping war in Afghanistan, one directly modeled on the defeat of the Soviet Empire in the very same country. When the war arrived, he wholeheartedly agreed with his American enemy about the nature of the conflict:

Bush admitted there can only be two kinds of people: one kind being Bush and his followers; and any nation that doesn't follow the Bush government, or the World Crusade, is guaranteed to be included with the terrorists. What kind of terrorism is more terrifying and evident than this?

So our bloated, overlong invasions failed to capture bin Laden for 10 years. Curiously enough, this has a parallel in American literary life: At no point in their bloated, overlong novels have any of America's current Important Novelists written anything engaging or memorable about our decade-long excursion in Central Asia. Maybe bin Laden's assassination will trigger a few darkly comic satires about the wacky fun of invading two countries, finally finding our man in NEITHER of those two countries, and what's more, finding him in an allied country living next door to a military and intelligence service to which we've given billions of dollars throughout the Bin Laden-Hunting/War Decade.

Making grim and evocative sense of all this stuff has become the province of journalists, for some reason. Lawrence Wright's The Looming Tower and hell-raising Pakistani journalist Ahmed Rashid's Descent Into Chaos aren't just great books about our Central Asian and Middle Eastern wars; they're some of the greatest books of our time. They're at least as worth reading as the latest toe fungus memoir or whatever.

What were we talking about? Oh yeah, Osama bin Laden is dead forever. That doesn't mean he doesn't have a future, of course; surely there's a Terrorist Ghost Adventures with Sarah Palin reality teevee show in the works, somewhere.