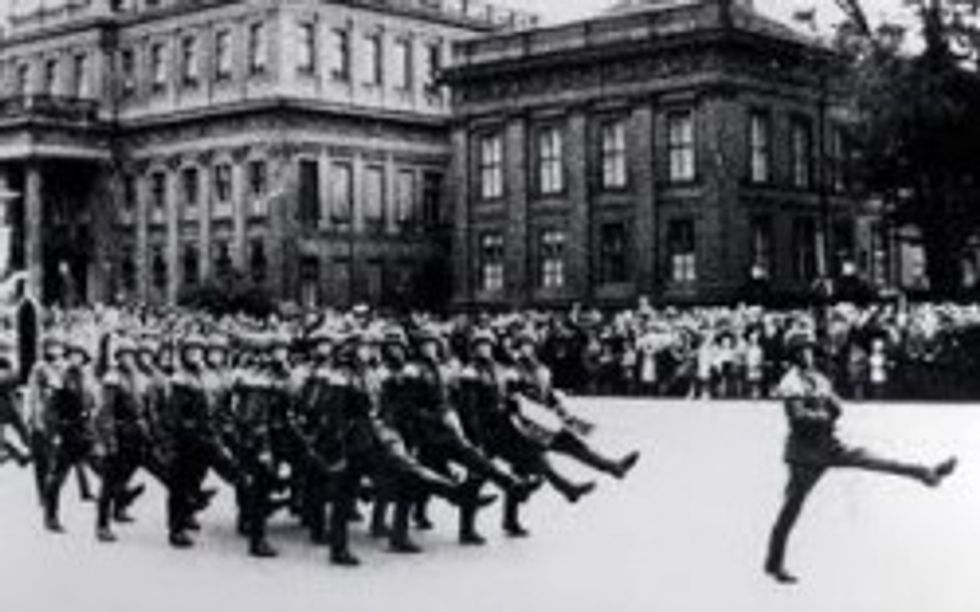 We here at Yr Wonkette are fond of mocking the ever-lovin' shit out of Republicans who are fond of saying that such-and-such or so-and-so isjust like Hitler or Nazis or the Holocaust, or some variation thereon. Like how overhearing things at Sen. Mitch McConnell's office is just like the gestapo. (Also, Watergate, which we guess means Nixon = Hitler?) And IRSghazigate will lead to the "American Holocaust" and the "great civil war." Both kinds! Hooray! And how if Rick Santorum can't gay-bash at our children, it is "kind of like the Jews in Nazi Germany." Uh, yeah. Kind of. Except not. And Obamacare is just like the Holocaust because that's how Hitler got his start -- negotiating slightly lower premiums with health insurance companies. And abortion is just like the Holocaust, because while Hitler may have started by negotiating insurance premiums, he quickly moved on to comprehensive medical care for women -- AND THEIR LADYPARTS -- which is obviously a short, straight shot to genocide.

Arizona Rep. Trent Franks (R-OF COURSE) is one such just-like-the-Holocauster, and this week, while while arguing for his bill to ban abortion at 20 weeks, which is unconstitutional plus also a total dick move, he went full-on Todd Akin, and jumped on the magic ladyparts theory bandwagon, dumbsplaining that "the incidence of rape resulting in pregnancy are very low." (Yes, that would be another time-honored tradition among Republicans of saying JAW-DROPPINGLY STUPID SHIT about rape. But let us not digress.)

So it is with great shock, a dash of awe, and, not gonna lie, a pinch of schadenfreude (that's a German word, and yes yes, we know who else spoke German), that we present you with this little gem, courtesy of Emily Bazelon at Slate:

For those of you who have not had your fifth cup of coffee yet, we will sum that up for you: Trent Franks -- and Todd Akin and Rep. Phil Gingrey, who wants to be Georgia's next senator, and all the Republicans who think women have magic ladyparts that somehow know when they've been rape-spermed -- believe the same thing the Nazis believed about rape and pregnancy. Not in, like, a hyperbolic way. They literally -- like, Joe Biden literally -- believe something drawn from actual medical atrocities perpetrated by actual literal Nazis. Godwin's Law has a confuse.

So, we are not saying Trent Franks is just like Hitler, exactly. Hitler got shit done, and Franks won't even be able to get his bill passed into law. We are just saying that Franks, and a bunch of his fellow Republicans, happen to believe the exact same thing that Nazis believed, and while arguing for the sanctity of fetuses, Franks invoked a mythical bullshit argument that was invented and propounded by Nazis. Literally.