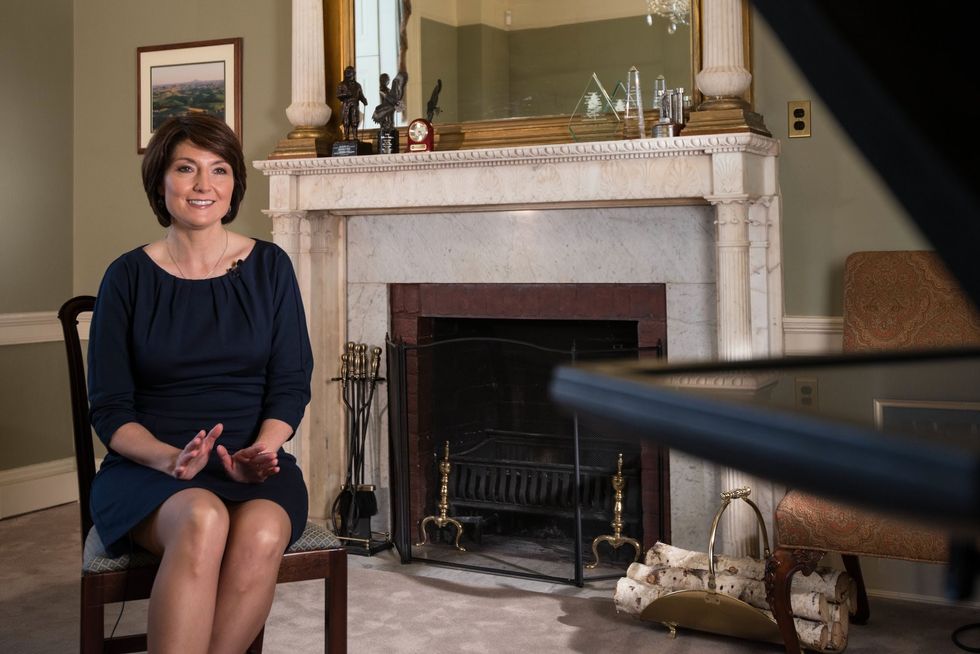 Washington Rep. Cathy McMorris Rodgers wants you to know: She doesn't hate your sick baby! She has a sick baby of her own, and obviously loves him very much. So when she voted to kill protections for sick babies like her son, by voting for the "American Health Care Act," she had excellent reasons to do so, and only all of them were lies!

First she explains that her little son, Cole, has Down syndrome; clearly, she and her husband want the best for him.

Hearing late-night host Jimmy Kimmel’s emotional monologue this week about his son’s condition and his family’s experience in the moments after his birth, I had a flashback to the day my son was born and we learned he had Down syndrome.

My husband and I had a lot of questions about Cole’s future. Whether he’d have health care shouldn’t have had to be one of them. When you’re facing years of doctor’s appointments, you want to know that having a preexisting condition, such as an extra 21st chromosome or a heart defect, won’t prevent you or your loved ones from accessing the care you need.

Protections for children such as Cole Rodgers and Billy Kimmel have long existed, as they should. And despite what people are saying, House Republicans aren’t seeking to strip these protections — or anyone’s protections — away.

WELL ACTUALLY, protections for children such as Cole Rodgers and Billy Kimmel have not long existed -- they have only existed since 2010, when President Obama signed them into law.

Before then, the health care system in the US was an even bigger shitshow than it is now! Here is what would happen!

Well, Tallulah, say you have insurance. You pay your premiums -- which increase by 10 to 15 percent a year! Then you get sick, and your insurance company decides that because you saw a dermatologist for your pimples, they won't pay for your chemo! This is a real thing that happens, ALL. THE. TIME. It is called "rescission," and it means you get dumped off your insurance just when you finally need it. If insurance companies can't find a reason to fire you from having insurance, they instead just put a cap on how much they'll pay. So even though you have insurance, you end up going bankrupt. This is called "medical bankruptcy," and IT happens all the time too!

Obamacare -- horrible, terrible, no good Obamacare -- outlaws rescission and tells insurance companies they have to take all the people who want to buy their product. They can't charge sick people more. They can't charge women more than men. (In some cases, 81 percent more!) They can't put a "cap" on how much they will pay for your treatment -- not an annual cap, and not a lifetime cap! Instead the cap goes the other way: The most YOU can pay out of your own pocket (not counting your premiums) in a year is $6600 ($7150 in 2017). That's a lot of money, yes, but it is LESS money than you would pay for a weekend in the hospital, by A LOT. And you never know when you're going to need a weekend in the hospital.

I love you Tallulah. I can't wait for you to be born!

The most terrifying words in the English language: They're Republicans and they're here to help

Republicans started fixing Obamacare almost immediately. They fixed it by:

Mysteriously, premiums and deductibles both rose really high after that! Obamacare started to suck -- not as bad as before Obamacare, but sort of bad nonetheless! And if you're in a red state -- with a few exceptions, like Ohio under John Kasich or Arizona under Jan Brewer (really!) -- you got boned. On purpose. It's amazing what a little sabotage between friends can do.

Cathy McMorris Rodgers Is Ready For Her Lies Now

Type some words, Rep. McMorris Rodgers, that we may cuss you.

This bill isn’t perfect. It doesn’t include every single component I wanted. But it came down to the AHCA or the continued disaster of Obamacare, which was an easy choice. The AHCA is a major improvement, because a federal one-size-fits-all approach to health care isn’t the answer. A major feature of our plan is returning control to states, through both funding and reducing red tape, which empowers them to innovate and to stabilize costs.

In this case, "innovate" and "reduce red tape" means they can exempt insurance plans in the state from having to charge people the same amount, or cover things like "cancer." That IS empowering!

With Obamacare, our health- insurance system relies on younger, healthier people subsidizing the costs of the older and sicker. As a result, insurance costs consistently increase to cover the costs of people who are considered “high-risk,” namely those who are sick or who have preexisting conditions. High-risk pools and reinsurance programs at the state level address this concern and have been successful in the past. Our plan establishes a program to provide federal resources for states to create high-risk pools, reduce out-of-pocket costs or promote better access to services.

Wow, that is a doozy! "With Obamacare, our health- insurance system relies on younger, healthier people subsidizing the costs of the older and sicker." That is literally how insurance works. Insurance itself is a socialist concept whereby people who aren't sick pay for people who are. People whose houses didn't burn down pay for people whose houses did. As to pre-existing conditions, those include having ever given birth (as 80 percent of American women will), acne, breathing, and wrists.

It seems odd to have to point this out to a member of Congress, but Maine's "invisible" high risk pool actually kind of sucked!

The vast majority of small businesses also saw rates jump, some by more than 40 percent, CAHC’s report found, as Maine’s law allowed them to be charged more based on the employees’ age, location, industry, and several other factors. One small publishing company on the Eastern shoreline had to pay $75,144 more to insure their 31 employees, even though the new plan had a higher deductible and less coverage.

And while people with preexisting conditions may continue to have "access" to insurance, if premiums are jacked up by an extra $17,000 per year for a woman because she has given birth in the past, nobody will have the money to pay them.

Then you really shouldn't have voted for the AHCA, because that is literally the opposite of what it does.

The AHCA is a monumental step forward that trusts the American people — not the federal government — to make the best decisions for themselves and their families.

Like the decision not to ever get sick. That is a good decision, which people should make more often. Especially all the little Kimmels and Rodgers, who really should decide not to be Born That Way.

Wonkette is ad-free and subsidized only by Readers Like You. SUBSIDIES PLEASE!