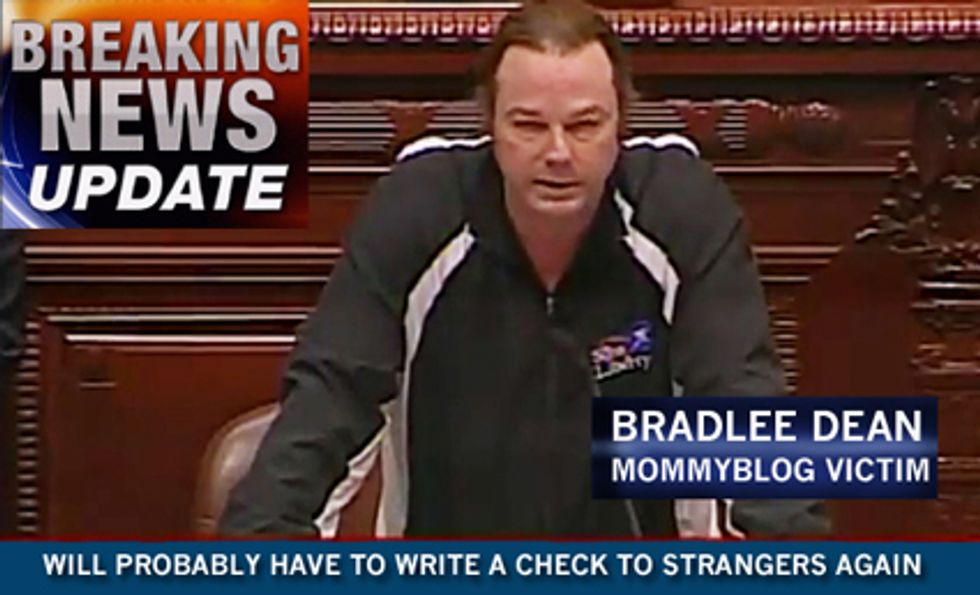 Wonket BFF Bradleeeeeeee Dean, best known in this here corner of the Interwebs for a laughably dumb threat to sue us back in The Day, is reportedly without his cult of unpaid Hare Krishnas begging outside gas stations (and getting thrown out of the van when they didn't pony up for gas themselves), as they seem to have all up and quit, oh no!

Who will help him grift school districts out of "anti-bullying" (bullying) funds now?

According to a source close to the situation, Dean's "You Can Run But You Cannot Hide International" staffers have all walked out on him. Yes, that includes his notorious street teams and Dean's "Sons of Liberty" radio cohost Jake McMillan, who our source says put in his two weeks notice and moved back to the East Coast. (McMillian, for some reason, sometimes went by the name Jake MacAulay.) [...]

The source said that in the wake of our July report about disaffected former You Can Run staffer Jake Dagel -- Dagel characterized You Can Run as a "cultic sham ministry" -- a group of upwards of a dozen former staffers got together and compiled testimony about how Dean had mistreated and exploited them. They subsequently brought 28 pages worth of testimony to the Minnesota Attorney General's office and are currently working on a mediation proposal with Dean's camp. The group of former staffers seek reimbursement of funds they say Dean owes them and a guarantee that Bradlee will never hold another leadership position with a ministry.

WE DEMAND JUSTICE. AND MORE MONEY. Also, how did we not know we could make Doktor Zoom and Snipy stand and bum change outside gas stations, for Jesus and the radical homosexual agenda.

Pack your bags, Dok and Snipy. And don't forget the gas money.