Reports: Trump Kids To Be 'Unpaid National Security Advisors' And THAT'S NOT WHAT A NATIONAL SECURITY ADVISOR IS JESUS CHRIST 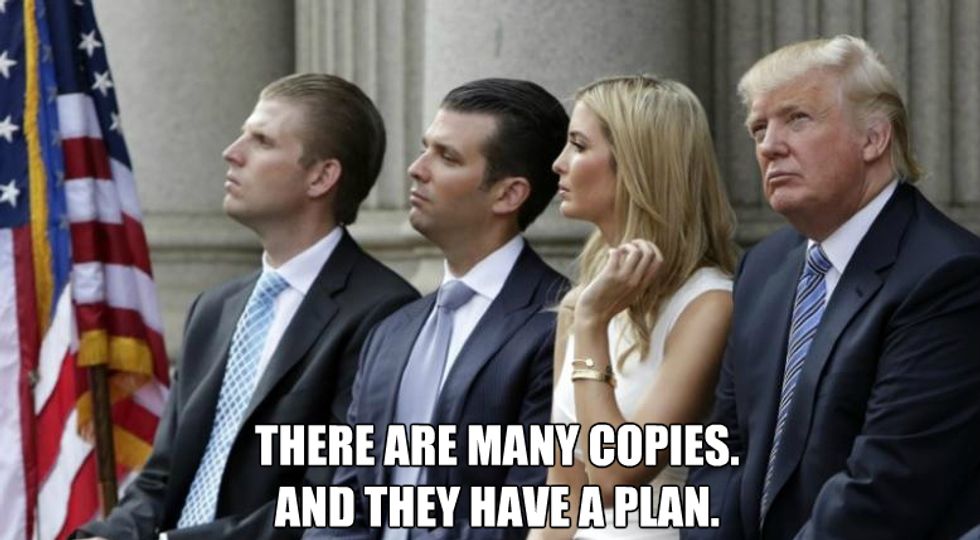 Donald Trump's suggestion that he could avoid any conflict of interest between his duties as president and his business by having his kids run the Trump Organizations was already among the greatest Bad Ideas of All Time; no matter how much he calls it a "blind trust," it's nothing of the sort. That pretense of a wall of separation between governing and getting rich was made even more of a joke by Trump's naming his three children and his son in law, Jared Kushner, to his transition team last week, and now, since either nobody's fooled or he thinks everyone is fooled, Trump is reportedly seeking top-secret security clearances for Donald Jr., Eric, and Ivanka, as well as for Kushner, because why even keep up the pretense any more? He needs their wisdom to help him make good decisions -- and besides, once they're sent off to only run the business, all the classified information can probably be wiped from their hard drives.

The Trump transition team is denying the reports that they would be designated "unpaid national security advisors"; an unnamed transition team member told the press pool, "That's not something I'm expecting right now," and then beeped enigmatically.

"It sounds to me that was an envelope question posed by someone," Conway told Fox News. "It doesn't sound like it was a formal request."

She also told NBC's "Today" show, "I only know what I read, which is that the inquiries were made very informally, and that's all I know."

CNN notes a president's children aren't generally brought into the national security apparatus, particularly since that time Amy Carter threatened a nuclear strike on ABC over its 1978 cancellation of the Great Grape Ape cartoon. It looks especially fishy since the Trumplings' access to classified information would give them all sorts of information they could presumably exploit once they're running the worldwide Trump brand. On the other hand, it should be pointed out that only Democrats are corrupt anymore, and also Clinton Foundation Benghazi emails.

Any pre-inauguration request for security clearances would have to be vetted by the Obama administration and national security team, but CBS News, which broke the story Monday, points out that "once Mr. Trump becomes president, he would be able to put in the request himself." The Trumplings would have to complete a security questionnaire and go through a background check.

In a "60 Minutes" interview, Ivanka Trump told Leslie Stahl she had no interest in a job with the administration, saying "I’m going to be a daughter. But I’ve-- I’ve said throughout the campaign that I am very passionate about certain issues. And that I want to fight for them.”

Like, for instance, the exact locations of all nuclear submarines at all times. It's a hobby of hers.