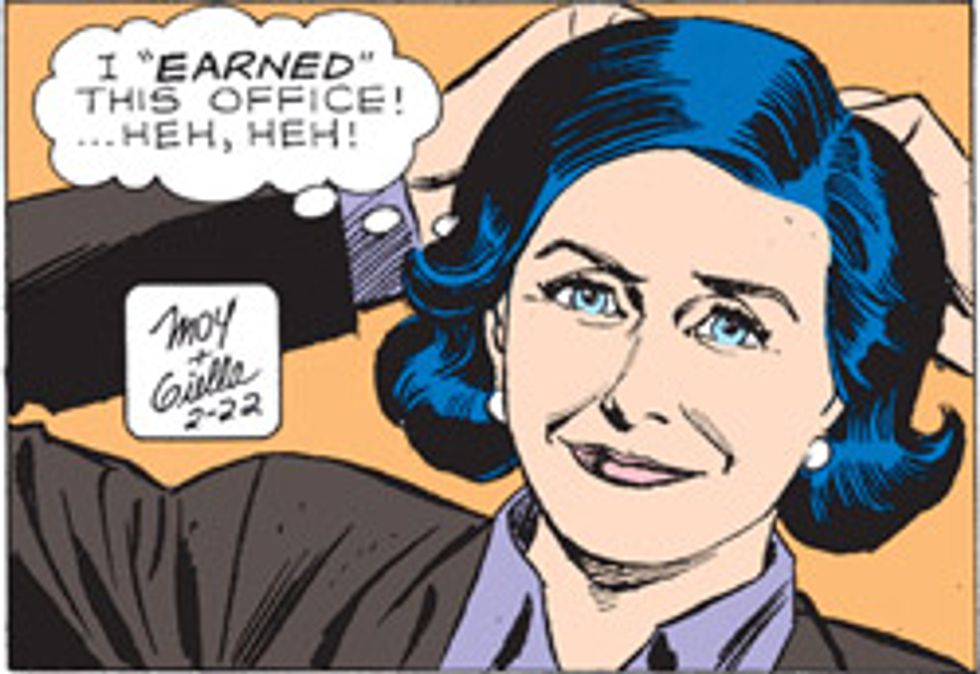 Are you sad because the exciting contest over which angry white fellow would take on Barack Obama in November is now over, and extra sad because the winner was the dude who was super awkward and boring, and not even super awkward and boring in kind of a fun way? Do you hold out high hopes that at least we'll have some amusing drama when Romney has to make a "daring" VP pick who will connect with real Americans and also be a hateful moron? WELL YOU ARE WHAT'S WRONG WITH AMERICA. You probably enjoy guffawing and masturbating while watching those shows about the all the Kardashian ladies; meanwhile, the old people who run the Republican Party spend their time sipping red wine and watching communist PBS and plotting how to foist boring loser Rob Portman onto the 2012 ticket.

The Wall Street Journal is the official mouthpiece of the so-called 'elders' of the Republican Party, a shadowy cabal of actual old people who gather in darkened underground chambers to hail their dark lord Satan and have serious discussions about deficits and interest rates and whatnot. At their last meeting, right after the human sacrifice, they decided to let the WSJ run an embarrassingly glowing article about how awesome Rob Portman is and how he is clearly the best VP candidate Romney could pick. What sort of glowing endorsements do these ancient sages have for the man who combines experience in both the legislative and executive branches with a disciplined and dull public speaking style?

With polls predicting a tight race between Mr. Romney and President Barack Obama that likely will hinge on a handful of swing states, many Republicans are urging the campaign to choose someone who will, above all, "do no harm." "It's a no-brainer," said Terry Holt, a Portman friend and Republican strategist who worked on the George W. Bush campaigns of 2000 and 2004. "People are looking for a certain level of seriousness."

"Do no harm"! It is hard to describe the excitement that will grip the electorate when they're presented with a nice middle-aged man from Ohio and told "Here's someone who probably won't fuck things up." But what are the other alternatives?

Mr. Portman personifies a basic strategic choice facing Mr. Romney: Does he reinforce his own strengths, such as his experience and focus on bread-and-butter economic issues, or does he add a dollop of youth, diversity and star power with someone like Sen. Marco Rubio of Florida? Mr. Romney also could choose a woman, such as Sen. Kelly Ayotte of New Hampshire, who introduced him at an event in her home state Monday.

God, no, youth, diversity, star power, women and their vaginas, that all sounds terrible. Let's go with Portman. We seem to recall that he had some sort of job at the White House, with the last guy who ran the place, what's-his-face ... what say ye, Wikipedia?

On April 18, 2006, President Bush nominated Portman to be the Director of the Office of Management and Budget; Portman was confirmed on May 26, 2006 ... On June 19, 2007, Portman resigned his position of OMB director, citing a desire to spend more time with his family and three children. During his tenure, the US public debt increased by 469 billion dollars.

That's like only $8.5 billion a week! UNIMPEACHABLE FISCAL CONSERVATIVE CREDENTIALS. Let's just impeach Joe Biden and get this guy in there right now. Sorry, Rob Portman's children, he is done spending more time with you. [WSJ]

Oh, hi, everybody, it's me, Josh Fruhlinger, your onetime political cartoon parser, come crawling back to your Wonkette after these many months! I quit my job because I wanted to write funny things full time/am insane, and our glorious new Editrix (not pictured) was kind enough to let me amuse you here a few times a week. I have missed you all terribly!