Republicans On Gun Silencer Bill After Las Vegas: We Don't Know Her! 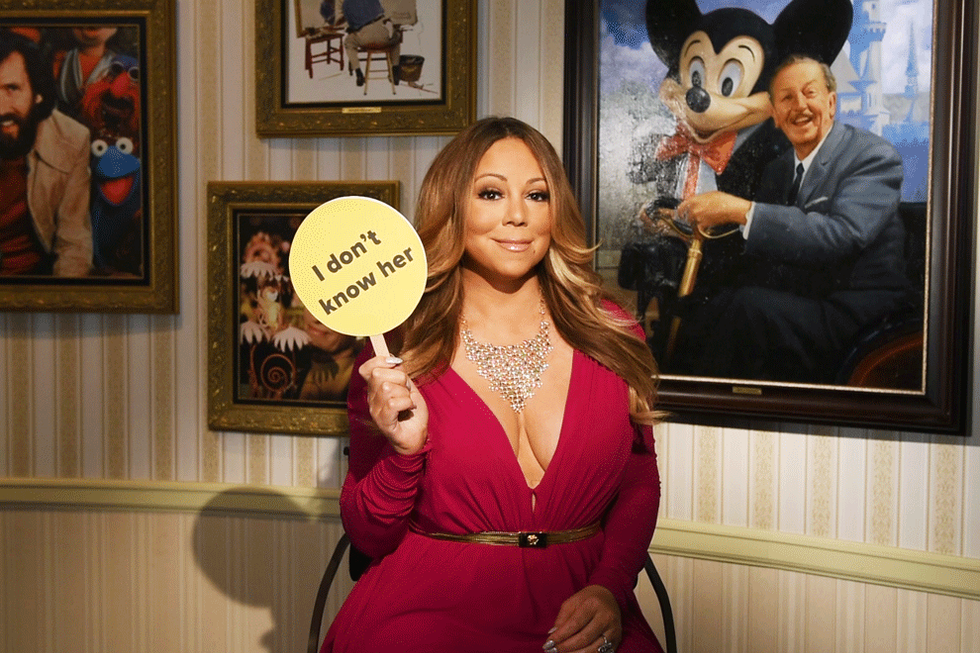 House Republicans know that right after a mass shooting is never the time to talk about guns (nor are all other times), so they are for the time being holding off from advancing a bill that would make it far easier for people to buy noise suppressing devices for firearms, commonly known as silencers. But because it is also Very Wrong to do anything political after a mass shooting, House Speaker Paul Ryan told reporters this has nothing to do with Sunday's massacre in Las Vegas, no, how could you think such political thoughts:

That bill is not scheduled now; I don’t know when it’s going to be scheduled [...] Right now we’re focused on passing our budget.

Please just don't mention that last week the Republicans were looking forward to bringing the bill forward quickly to celebrate the return to Congress of Steve Scalise, who survived that shooting at a baseball practice in June. We might note that the House cancelled a committee hearing on the silencer bill scheduled for later the day of that shooting, non-politically. We might also note that during that event, the noise of the shooter's unsuppressed gun made it easier for Capitol Police to find him and shoot back.

Also, a brief word on terminology: You have to call such a device a suppressor, because the gun-humping crowd insists anyone calling it a "silencer" is a know-nothing who's incompetent to discuss firearms at all. Among the idiots who know nothing about guns? The text of the bill itself, where "silencer" is used throughout. In the tradition of rightwing trolls who say stuff purely to annoy liberals, we will therefore use "silencer" for the rest of this article. If any gun-humpers are triggered by that, they'll just have to deal with it.

The silencer bill -- or "Hearing Protection Act," because really, it's all about safety -- was folded into a larger Gun Fun bill called the "Sportsmen’s Heritage and Recreational Enhancement" (SHARE) Act, presumably because it would allow shooters to share bullets more easily among targets who might otherwise flee at the sound of loud gunshots. Currently, owning a silencer requires a special permit from ATF, and requires the same sort of background check and taxes required to buy fully automatic weapons or some explosives. The SHARE Act would make getting a silencer far easier, requiring only the quick automatic background checks needed for buying any other firearms bought from a dealer. (Presumably, that means they'd also fall through the same loophole as other weapons, so you could grab one at a gun show with no background check at all.)

In addition to the silencer provisions, the bill would also make it easier to take firearms across state lines and would reclassify some types of ammo as not "armor-piercing," which would make it easier to purchase bullets that will go through a cop's Kevlar vest, because after all, if government doesn't fear lethal force from citizens, then why even have a Second Amendment?

In discussing the delay, Republicans were very careful to say we shouldn't be talking about guns just now, because where is your sense of decorum?

House Rules Committee Chairman Pete Sessions (R-Tex.) acknowledged that the Las Vegas shooting was a “complicating issue” with the bill — though he did not rule out that it could come to the floor later in the current Congress.

“Nobody wants to bring up something when there’s something like that,” he said. “We wouldn’t want to bring up any difficult issue.”

It's never TOO SOON to fix our uniquely American problem of Americans killing Americans with guns.

Paul Ryan not only nixed Nancy Pelosi's call for a bipartisan special committee on gun violence, but also rejected a proposal by Georgia Rep. John Lewis for a "show of unity and action to curb acts of gun violence." Unity was apparently too divisive for Ryan's taste:

“We were told in caucus today that the response was, if it has to do with policy, it was a nonstarter,” said Rep. Mike Thompson (D-Calif.), chairman of the House Gun Violence Prevention Task Force.

Steve Scalise himself said, in an interview for Fox News, that any talk of doing something is entirely inappropriate:

Because first of all you’ve got to recognize that when there’s a tragedy like this, the first thing we should be thinking about is praying for the people who were injured and doing whatever we can to help them, to help law enforcement.

Republicans did hold a meeting Tuesday where they all agreed now is the time for thoughts and prayers, and nothing else:

“We all discussed the tragedy and certainly all of our thoughts and prayers go out to them, and that was pretty much the total extent of it,” said Rep. Chris Collins (R-N.Y.).

Collins added that Congress ought to focus on mental health rather than gun restrictions: “We are not going to knee-jerk react to every situation. The Democrats continue to want to say, when a mentally deranged person does what they do, it’s the gun’s fault, not the shooter’s fault. . . . People focused on mayhem and the kind of evil this person was — in their heart, you can’t stop them. They will do it one way or the other. You can’t stop a mentally deranged person.”

Ryan also stuck to the "let's talk about mental health instead" script, although there's no indication that the Las Vegas shooter had a diagnosed mental illness:

“One of the things we’ve learned from these shootings is that often, underneath this, there is a diagnosis of mental illness,” Ryan said. “...Mental health reform is a critical ingredient to making sure that we can try to prevent some of these things from happening.”

Presumably, that would be the kind of mental health reform we'd get by repealing Obamacare, slashing Medicaid and Medicare, and making it easier for mentally incompetent folks to buy guns.

While the Las Vegas shooter didn't apparently use a silencer, he had modified several of his semiautomatic rifles with "bump stocks" (also called "bump-fire stocks" and "idiot enhancement devices") which use the recoil of the weapon to allow a high rate of fire that rivals a fully automatic weapon without violating federal laws against full-auto weapons, because the guns still fire only one shot per trigger pull. The bump stock allows far more trigger pulls than an unassisted human finger could ever manage. A number of Democrats are calling for a ban on bump stocks, which should drive a buying spree for the devices.

Since the NRA hasn't yet threatened to rain death on any Republican who allows any limitations on firearms technology, a few Republicans have thrown electoral caution to the wind and said restrictions on bump stocks might be a good idea, like the chair of the House Freedom Caucus:

“You have to have a special class of license to have an automatic weapon, and so if this is something to bypass this, I think it becomes something that we obviously need to look at in the future,” Rep. Mark Meadows (R-N.C.) said. He added that the aftermath of a tragedy “is not the best time to look at any legislation.”

Good thing he got that "not the time" line in there, or he could have been in big trouble. Get ready for an onslaught of rapid-fire explanations of why everyday Americans absolutely must have bump-fire devices to keep America safe from tyranny, ISIS, and/or roving gangs of one scary black teenager in a hoodie.

Yr Wonkette is supported by reader donations. Please CLICK HERE to help us amplify the noises we make.