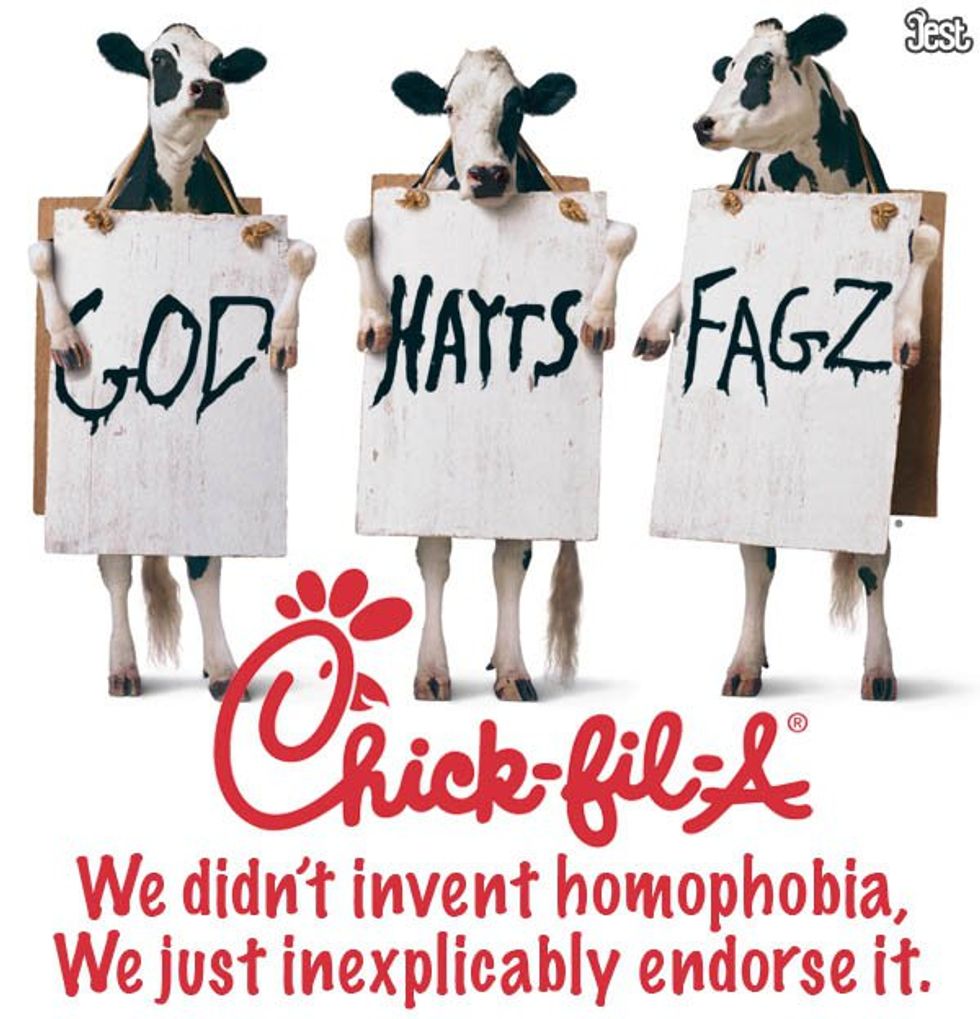 National Journal, Ron Fournier’s Church of Both Sides Do It, is out with some Very Serious Journalism™: It turns out that, after Chick-fil-A was outed as oppressed by the Gay Mafia and the Feminazis, congressional Republicans decided they really, really loved them some fried chicken sandwiches, like, all the time, for the Lord.

Our scene begins with Sen. Lisa Murkowski (R-Land of Enchanted Snowbillies), rushing past a sea of reporters. Take it away, NJ:

It was nearly midnight on a long day that had also featured the year's first meeting of the National Republican Senatorial Committee, whose help Murkowski will need in her 2016 reelection bid … . But when I asked her what had happened at the NRSC meeting, the senator's mind went not to strategy and fundraising, but to food. "It was Chick-fil-A! We always have Chick-fil-A!" she complained. "I don't mind Chick-fil-A every now and again, but you know, here's my deal: I'm really trying to eat healthier. I don't know what they coat that Chick-fil-A stuff in."

They coat it in the blood of Jesus, Senator, what’s your problem?

Anyway, it turns out she wasn’t kidding about Republicans being totes fucking obsessed with those greasy, shits-inducing sammies, which we wouldn’t eat with your GI tract.

Since 2012, when the Atlanta-based fried-chicken chain came under fire for donating millions to groups fighting same-sex marriage—and CEO Dan Cathy declared that redefining marriage was "inviting God's judgment on our nation"—Chick-fil-A has become congressional Republicans' fast food of choice, a culture-war statement on a bun. … Two and a half years later, the scent of fried chicken practically permeates the walls of the Capitol. Tea-party members in the House nosh on original chicken sandwiches and waffle fries at the Heritage Foundation's monthly "Conversations with Conservatives." Sen. Lindsey Graham of South Carolina, a longtime Chick-fil-A aficionado, has the chain cater his birthday lunch party every year. During late-night GOP strategy sessions in the Senate ahead of a potential government shutdown in December, Chick-fil-A was the hunger-reliever of choice. And while Speaker John Boehner prefers a glass of red wine and Italian dishes served alfresco at Trattoria Alberto, his office has dropped hundreds on Chick-fil-A fare in the last few years—though Boehner spokesman Michael Steel says he's never seen the speaker himself indulge.

Republicans, such adventurous foodies. In two years, between 2012-2014, House Republicans spent 13 grand on Chick-fil-A, which, as NJ helpfully notes, would buy you 3,900 awful sandwiches. But hey, at least you would be paying for FREEDOM.

"They kinda got abused," says Republican Sen. Jeff Sessions of Alabama, "and I guess some would like to support 'em."

The Republicans say this is not a statement about the decaying state of our gay culture; it's just that they can buy in bulk and have malfunctioning tastebuds. Also, too, workers’ rights (to be off on Sunday without pay, not to have a decent wage, don’t be silly):

Several House Republican staffers strenuously denied that cultural politics was at the root of the members' eating habits. Republican groups like Heritage, they pointed out, have been Chick-fil-A addicts for a decade. "It's not served as some type of political statement," House Budget Committee spokesman Will Allison told me by email. "It's just tasty and I guess easy to order in bulk. They're also great corporate citizens—not open on Sundays, so employees have the day off, and terrific customer service."

RELATED (sort of!): You know how in Oklahoma, they’re trying to figure out how to cope with The Gay being crammed down their Soonerific pie holes? One of the very special anti-throat cramming measures under contemplation is a Religious Freedom Restoration Act (“restoration” because all of your freedoms to be religious have been taken away by the homos, duh).

Well, the Oklahoma Democrats (they exist!) came up with a very neat way to shame the haters:

But Tuesday, Rep. Emily Virgin introduced an amendment to the bill that would require those businesses refusing to serve same-sex couples or LGBT customers to plainly state their discriminatory practices.

Any person (as defined above in the legislation) who is unwilling to serve individuals "based on sexual orientation, gender identity or race of either party to the marriage shall post notice of such refusal in a manner clearly visible to the public in all places of business, including websites," reads Virgin's amendment. "The notice may refer to the person’s religious beliefs, but shall state specifically which couples the business does not serve by referring to a refusal based upon sexual orientation, gender identity or race."

In other words, if an Oklahoma Chick-fil-A wanted to not serve The Gays because of its Sincerely Held Beliefs™, that would be cool — freedom, etc. — they’d just have to post a sign saying they do not want to serve The Gays.

Of course, that Chick-fil-A would be the most popular thing in the state. Because Oklahoma.