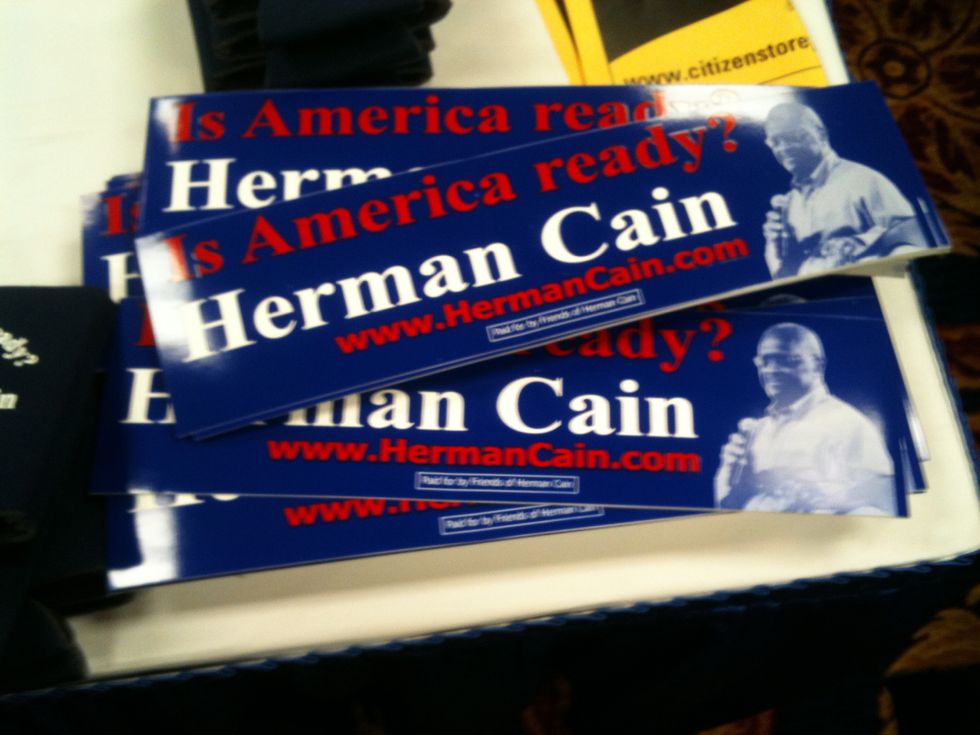 Today, a presidential candidate is making the rounds deploying "the race card." Surely the Republican Party is up in arms about this, no? That Kenyan was a crook for doing such things in the last contest. Actually, the man doing this is Herman Cain, the only Republican candidate for the job at the moment, and a guy who could use the publicity. Cain istaking on a black progressive columnist at AlterNet, Chauncey DeVega, who wrote about Cain's CPAC speech and said his candidacy is "a version of race minstrelsy where he performs 'authentic negritude' as wish fulfillment for White Conservative fantasies." Prime race-card material. But not only is one of their own using the hated "card," Cain is the beneficiary of Republican affirmative action, and they don't seem to realize it.

Now: There is nearly no safe way for African-American progressives to say this stuff about African-American conservatives. Emerge magazine published plenty of great articles, but the one thing everyone remembers about it is the cover with Clarence Thomas as a "lawn jockey for the far right." And it's probably too obvious for DeVega to have pointed out, but one element of the Black Republican's appeal is his appeal to inspire rhetoric offensive to liberal whites. (Michael Steele played this card in his 2006 Senate campaign; at one point he blew up when Steny Hoyer said he followed George W. Bush "slavishly.") Thus: Cain pieces in the Washington Times, Pajamas Media ("it's a racist attack on a good man"), and Andrew Breitbart's Big Journalism -- the latter piece got a fresh DeVega-slamming quote from the black conservative group CORE. Cain will do a mini-media tour today, starting with Neal Boortz's radio show.

It's clear how Herman Cain is going to get press this election: race issues. That's it.

At CPAC, we found plenty of people at talking about how all Muslims are terrorists. And we found a table under the banner "Youth for Western Civilization." But CPAC also had at least one panel about trying to reach out to minorities. And we saw a few black attendees who weren't Herman Cain. And conservatives are proudly passing around a video taken at CPAC of young attendees criticizing some white supremacist who was trying to recruit them. Conservatives do want black people to support what they support. It seems to make them uncomfortable that overwhelming majorities don't.

Which brings us to Herman Cain's candidacy: this man was listed on the CPAC straw poll ballot as "Former Godfather's Pizza CEO." Familiarity with pizza does not generally qualify somebody for the presidency. Cain may do well speaking to Tea Party groups, but the fact is that nobody with his resume would be treated as a serious Republican presidential candidate unless he was black. It's not like Cain has a huge following or any sort of chance of winning. Republicans are facing a black president this election, and it would be helpful to their image to have a black man on the stage for their debates. This is affirmative action, something Republicans are supposed to detest. It may not be Cain who's self-loathing; it may be his party. [Weigel]