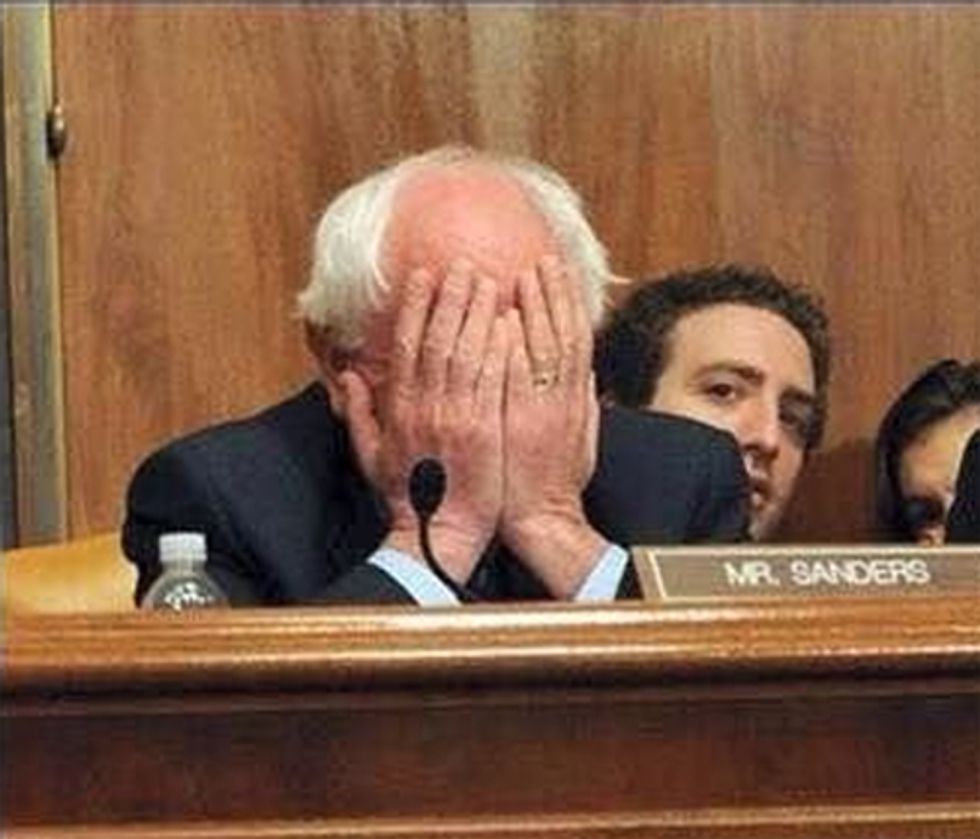 I am surrounded by morons.

A group of 64 congressional Republicans sent a very testy letter to Attorney General Jeff Sessions asking him if the Constitution still counts for anything in this country of ours, or if it's not OK for Senator Bernie Sanders to literally burn Christian nominees for government appointments at the stake just for stating the obvious truth that Muslims are bound for hell. They aren't saying that Sanders is trying to impose a Judeo-Secularist Anti-Theocracy in America, which of course he is; they simply want clarification on whether Sessions thinks the Constitution's prohibition on religious tests for office still applies after Sanders asked mean questions of a candidate for one of Donald Trump's nominees. If you ask mean questions about religion, surely you're applying one of those religious tests, aren't you? Yes, this is from the same crowd that worried about whether Barack Obama was secretly a Muslim and Mitt Romney was Too Mormon to be president.

The fuss involves Sanders's questions back in June during the confirmation of Russell Vought -- nominee to be deputy director of the Office of Management and Budget. Or rather, as The Washington Times puts it, "Russell Vought, a devout Christian," which is apparently the most relevant thing about him. Vought had published a blog post at Erick Erickson's Internet House of Jesus and Politics in 2016, in which Vought defended Wheaton College's firing of a professor who wore a hijab in solidarity with Muslims (who were, you may remember, being told by a presidential candidate that they don't belong in America). To make matters worse, the professor, Larycia Hawkins, even said that "Muslims worship the same God" as Christians, which was definitely good reason to fire her (from a First Amendment point of view, sure -- private religious institutions are free to be small-minded bigots).

Sanders took issue with some of the stuff Vought devoutly wrote, and here is what 64 Republicans worry is the Senator from Vermont applying a "religious test" for public office, according to the Washington Times:

In a blog for The Resurgent, Mr. Vought wrote that Muslims “do not simply have a deficient theology. They do not know God because they have rejected Jesus Christ, his Son, and they stand condemned.”

The article cited John 3:18, which reads: “Whoever believes in Him is not condemned, but whoever does not believe stands condemned already because they have not believed in the name of God’s one and only Son.”

Mr. Sanders raised several questions about the blog post during the hearing and cited it as his reason for ultimately voting against Mr. Vought’s appointment.

“Do you believe—do you believe that that statement is Islamaphobic?” Mr. Sanders asked at the hearing.

“Absolutely not, senator,” Mr. Vought responded. “I’m a Christian, and I believe in a Christian set of principles based on my faith.”

Don't you see? It is a religious test for office, because Sanders was badgering Vought about whether he would be doing religious tests on American citizens in his government job. Oh, and whether he thinks Muslims and Jews are going to hell, which of course they are unless they get saved. Vought replied that as a Christian, "I believe that all individuals are made in the image of God and are worthy of dignity and respect regardless of their religious beliefs,” which is awfully nice of him, but Sanders said he considered the nominee "not someone who is what this country is supposed to be about," and said he'd be voting against Vought's confirmation.

The wingnuttosphere exploded with stories about Bernie Sanders violating Article VI, Section 3 of the Constitution, which says, it says right there, that "no religious test shall ever be required as a qualification to any office or public trust under the United States.” And what was Bernie Sanders doing? Voting against someone who failed his religious test.

So the angry Christians of -- we swear we are not making this up -- the Congressional Prayer Caucus, led by that group's co-chairs Rep. Mark Walker of North Carolina and Sen. James Lankford of Oklahoma, are seeking clarification from Jeff Sessions as to whether we've just up and thrown out the Constitution in a fit of secular humanist political correctness. The letter asks Sessions for guidance:

“The free exercise of religion means the ability to practice your faith without fear of punishment by the government,” the letter reads. “The government violates that right if it determines which faith or non-faith practices are valid or which aspects of a particular faith are legitimate.”

“As such, we urge you to make clear in your forthcoming guidance that the scope and meaning of Article VI has not changed: no religious test will ever be required to serve in the government of the United States.”

Obviously, Sanders's questions do represent a religious test, because the fact checkers at the Daily Caller said it did by questioning Vought about a "theological article" he'd written. Even The Atlantic's religion correspondent, Emma Green, called it a "religious test," as did Hemant Mehta, the "Friendly Atheist" at Patheos. Over at the Washington Post (which hates God), Jim Wallis, founder of the liberal Christian group Sojourners, said that at worst Sanders had conflated a public policy question -- did Vought think Muslims have equal rights as Americans -- with a theological one -- are they going to Hell?

These millionaires aren't going to tax cut THEMSELVES you know!

So shame, shame on Bernie Sanders for daring to suggest that someone who thinks Muslims are all going to hell may also have some biases in how he approaches his government job. True, as Wallis says, the discussion would have been more fruitful if it had focused on the Trump administration's actual budget priorities, like eliminating funding for Meals on Wheels or slashing the federal safety net, which can certainly be condemned without even once citing Matthew 25:31-45, without all that "what you did for the least of these" stuff, though it adds a bit of theological oomph. And let's hear it for the brave stand against religious tests taken by the members of the Congressional Prayer Caucus. Truly, they are blessed.

Moderator note: Yes, this story is about Bernie Sanders. Please keep comments limited to the story itself, and do not re-litigate the 2016 primary. We will be deleting comments that go there: no hating on Bernie for being the worst splitter ever, and no "Bernie woulda won because Hillary is a corporate shill!" Seriously, it is 102 Fahrenheit degrees in Boise today and we are not in the mood for that crap. Also we love you.

Yr Wonkette is supported by reader donations and the stolen blood of the faithful. Please click the "Donate" linky below to give us the former. We have our own sources for the latter.