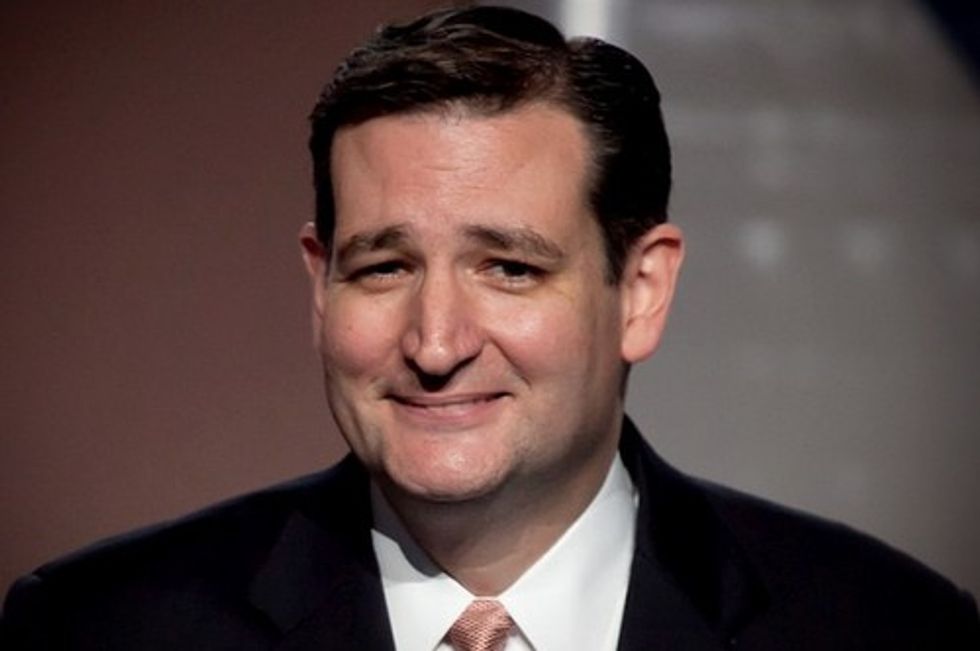 Oh damn, all y'all. Things are not looking good for our hero, Cuban-Canadian Ted Cruz of Texas. And by hero, we mean actual skin sack of bile who deserves all the scorn and the rage and the gratuitous name-calling and face-punching. (Metaphorically, of course, because we are not Ted Cruz and do not believe in doing literal violence, not even to five-year-old girls named Cruz AHEM, you sick son of a dry-drunk dick boil.)

[contextly_sidebar id="y1qig9ldE8Ia1DIsMgaAbJQPQ4WRN56b"]Despite Cruz trying to laugh off fresh new allegations that he is an illegal foreigner who is not eligible to be president, establishment Republicans have decided that on this one issue at least, they are on Team Trump, because they hate Ted Cruz, like, sooooo much. Check out Gov. Terry Branstad -- of Iowa, which we hear is one of those really important first-in-the-nation states, whose caucuses Cruz is trying super hard to nail down in the less than a month from right now -- twisting Cruz's nuts in his hand like little (very little) pork-flavored stress balls. The Republican (yes, Republican) governor unhelpfully stated that the question of Cruz's eligibility is most def "fair game" because Cruz was un-Americanly born in un-America, and also, fuck you, Ted Cruz:

"When you run for president of the United States, any question is fair game. So let the people decide," Branstad told reporters at his weekly press briefing at the Iowa Capitol.

[contextly_sidebar id="np9pT1yDK5Cot4HIVw86nqRWYIlxtSRG"]Nothing like having the governor of a crucial state, who is also a member of your own party, give the ol' wink and a nod to caucus-goers that they should at least be just askin' whether the Constitution says nuh uh, Ted Cruz can't be president. Also ready, willing, and super eager to smack around Cruz with a super-sized heaping of payback's a bitch? Why, it's the guy Cruz name-called and bad-mouthed in a way that made Cruz's own Republican Senate colleagues GRRRR SMASH! angry, which, in retrospect, was a hilariously terrible idea. Here's Senate Majority Leader Mitch McConnell (another Republican!) pissing all over Ted Cruz, on ABC's "This Week":

STEPHANOPOULOS: Back in 2008, there was bipartisan legislation passed unanimously in the Senate declaring that Senator John McCain, who was a natural-born citizen, even though he was born in a territory, I know you don't like to get in the middle of a 2016 campaign, but there have been questions raised about Ted Cruz's eligibility to be president.

Will the Senate pass legislation saying that he is also a natural-born citizen?

MCCONNELL: Well, you're right. I've made a point of staying out of the presidential race. These guys are all running their races as hard as they can and --

MCCONNELL: -- to the -- I don't think the Senate ought to get in the middle of it.

STEPHANOPOULOS: Even though they did in 2008?

MCCONNELL: I just don't think the Senate ought to get into the middle of this. These guys are all slugging it out in Iowa and New Hampshire. We'll have a nominee hopefully by sometime in the spring.

[contextly_sidebar id="1STO8ovm0P8g2jKvxHMFd4pvdJNefFGJ"]If there is a clearer way of saying "Fuck you, Ted Cruz," we have never seen it. And we practically invented saying "Fuck You, Ted Cruz." Sure, the Senate was willing to rally around Panamanian-American John McCain -- not exactly known for being unanimously loved by his colleagues either -- to put to rest any silly birther questions. But even McCain thinks Cruz's eligibility is a totally fair question because fuck you, Ted Cruz.

Isn't there anyone, besides Hispanic-American Iowa Rep. Steve King (R-WTF?), willing to have Cruz's back? He has Ivy League lawsplained it until he's blue in the face; he has even released his mother's birth certificate (though not the original long-form one, so haha, totally doesn't count). Won't someone from the Republican establishment Cruz has made a point of running against stand up for Cruz? Reince Priebus, head of the Republican National Committee, maybe?

Listen, I don’t get involved. I’m not going to get in the middle of all these candidate issues. It’s a bad place for me to be. I’ll let all these folks argue about this stuff, and I’m going to stay out of it.

Nope, not him either. Weird! Why, it's almost as if everyone hates Ted Cruz so much ... because they do! Which leads us to the conclusion that if Republicans do end up with a messy brokered convention on their hands, can it please PLEASE PRETTY PLEASE come down to the two most hated guys in the field, Trump and Cruz? Because that's one Sophie's Choice we desperately would love to watch the GOP mishandle.

Until then, we'll settle for watching Cruz's entire party, one by one, enjoy pissing all over his smarmy face because -- all together now, in a bipartisan way -- fuck you, Ted Cruz.